In 1974 Warren Clark opened a little barbecue shack in Tioga, Texas, and it didn’t take long before it became the darling of food critics, chefs and celebrities. In 1989, Alan Richman, then writing for People, claimed “Clark produces the best barbecue in Texas, which is something to brag about.” Dallas chef Dean Fearing became a Warren Clark disciple and would ferry visiting chefs to Tioga for a bite of barbecue. Robert Del Grande and Stephan Pyles, fellow titans of Southwestern cuisine, also became regulars. At its height, Clark courted names like Mickey Mantle and Terry Bradshaw, while lawyers in downtown Dallas would fly their helicopters up to the empty lot across Highway 377 for a quick lunch of brisket and ribs. By the late nineties, it had all started to fade away.

Warren Clark passed away in 1997, and the place lost his presence. His wife Nancy ran it for a few years, then sold it to a small ownership group. I asked long-time server Patti Seyler if anything else contributed to the decline. “There’s a whole lot more between Dallas and here nowadays,” referring to the thirty-odd miles of solid development between downtown Dallas and the northern edge of Frisco. I wondered the last time a lunch guest arrived via helicopter. “It’s been a while. The lawyers still come, but now they’re riding motorcycles.”

In the middle of a Thursday afternoon, my family and I were the only customers for the first half of our meal. The kids weren’t particularly hungry, so we started with pie. The recipe for the chocolate pie came from Patti Seyler’s grandmother, and it’s fantastic. The meringue was almost a foot tall, but most impressive was that the filling actually tasted like chocolate instead of a pudding mix. Apple pie with a crumb topping was also good, and is available a la mode or with cheddar cheese melted on top. We skipped the cheese.

Sadly, the smoked trout that was a fixture on Warren Clark’s menu is gone, but there’s plenty more to choose from.  The lamb fries on a previous visit were mild, and fried in a crisp batter. Coupled with cocktail sauce they could have passed for tail-less shrimp. Another appetizer is a plate full of rib ends. These aren’t rib tips from a spare rib, but rather the end bones from either end of a rack of St. Louis ribs. The smoke and spice is more intense, but they also get pretty dry. Some were revived with just a dunk into the sauce, but others needed to marinate a while. 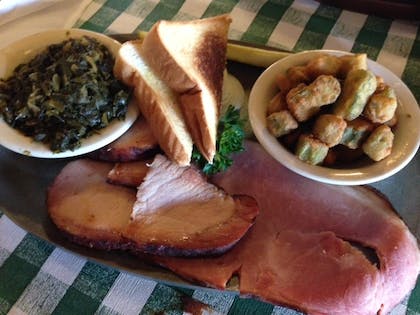 Sliced ham wasn’t too thick, but a single slice took up half a platter. I tried it along with dry slices of pork loin which is smoky and tastes a bit hammy from a heavy salt rub and a long ride in the smoker. At least I thought the loin tasted hammy, until a bite from the outer edge of the ham slice. A ring of fat around the border had captured considerable smoke, and the meat was juicy and salty. With so much cheap deli ham making it onto barbecue menus, finding a smoked ham this good is rare at a barbecue joint.

A small bowl of peppery greens had a nice bite and still held a bit of crunch. Hand-breaded okra was a so good I began eating it by the handful like so much popcorn. The more famous deep-fried corn was less successful. It was as if the fryer has sucked out all the bright corn flavor, and left just mushy kernels behind. 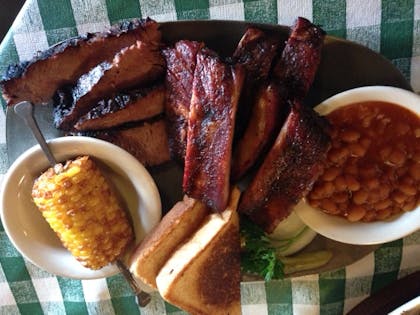 The runner up behind the ham were the St. Louis ribs. They are coated with a spice rub and brushed with sauce while smoking. Even with all that treatment, there’s still a nice smoky bark. The meat is on the drier side, but it’s still a good rib. Slices of brisket could have used some of that rib rub…and some fat…and some moisture.

They still do briskets the way Warren Clark did, which means no seasoning besides the smoke. It also means that the briskets won’t be ready for three days. They smoke on a Southern Pride rotisserie for a full day at 165 degrees. The temperature is then lowered a few degrees for the next two days, during which time no more wood is added as it just cooks with the gas heat. This makes for an incredible level of smokiness, especially in the fat. Those layers of fat are also so tender that you could spread it on a slice of white bread. That’s why it’s such a shame when they trim the fat off before serving. I even asked for a little fat to be left on, but my server said they’d cut it all off the whole briskets already. What I got was a few dry and flavorless hunks of beef (above).

To be fair, I’ve had no trouble getting plenty of that good fat on previous visits, and after I told Patti about the problem during a pit tour, she made sure to send me home with a few slices of good fatty beef. This visit may have been an anomaly, but there’s not much to like about a lean slice of Clark’s brisket.

That doesn’t mean there’s not a whole lot more to like about Clark’s. The drive is a pretty quick one from Dallas, and takes you through some nice horse country. The building has some charm as does most of the staff. The brisket may be a wild card and the fried corn falls flat, but you can eat consistently well with the rest of the menu. And if all else fails, just get another slice of chocolate pie. It might just make this place famous again.