When I was growing up in Ohio, land of my birth, it was a barren wasteland when it came to barbecue. If you were looking for ribs, you better have liked them baked, sauced, and grilled. The pitmasters of my youth specialized in chicken on a backyard grill, and I didn’t even know what an offset smoker was until I moved to Texas. So imagine my surprise when celebrity chef Michael Symon announced that he was opening Mabel’s BBQ, a Cleveland-style barbecue joint, just a few blocks from Lake Erie. 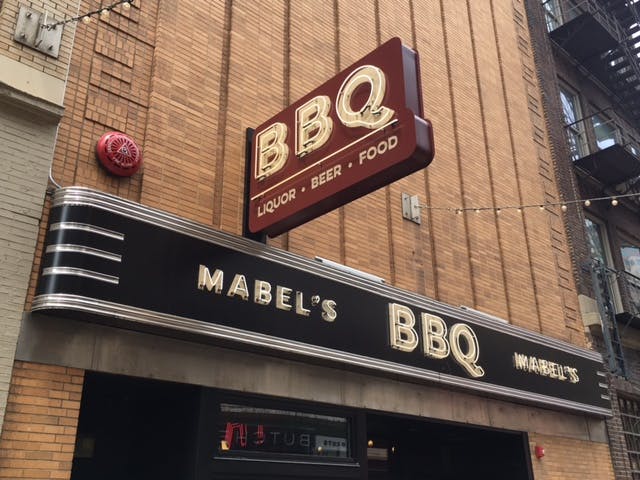 I didn’t know what “Cleveland-style” barbecue meant, and after a few barbecue meals in Cleveland, I’m not sure it even exists. The style certainly isn’t put to practice at The Proper Pig in Lakewood, a suburb of Cleveland. After a three year run as a food truck, they moved the business to a brick and mortar a few months ago. In fact, it opened to little fanfare the same week as Symon’s headline-hogging Mabel’s BBQ.

The Proper Pig bills itself as Texas-style, offering photos of the team with Aaron Franklin and Wayne Mueller as proof. The menu agrees. Brisket, ribs, hot links (soon to be from Taylor, Texas-based Mikeska Brand), and pulled pork are available along with beans, slaw, and potato salad. Besides a few recipe variations, like sweet beans, and the addition of bacon on a stick, the joint would raise few eyebrows in Fort Worth. The barbecue is good, but it does little to help a unique barbecue style blossom in Cleveland. But it’s hard to fault them for hopping on the Texas barbecue bandwagon.

That wagon, apparently, also includes Michael Symon and Mabel’s. To create a new style of barbecue, you have to start somewhere, and much of Symon’s barbecue has roots in Texas. The only brisket I saw growing up in Ohio was interpreted through corned beef and cabbage. You still need luck on your side today to find one in a local grocery store, and the same goes for racks of beef short ribs. Both are highlights of the Mabel’s menu. That beefy duo didn’t come from Cleveland, but thankfully, he does them both well.

Brisket slices ($26 per pound) were tender, juicy, and salty. The smoke was overwhelmed a bit by the spice rub, but then I’m not used to meat smoked with the milder apple and cherry woods (both sourced locally). It wasn’t perfect, but it was brisket to be proud of, and the mustard-based barbecue sauce (made with local Bertman Ball Park mustard) was a better pairing with the beef than any tomato-based barbecue sauce I’ve had. 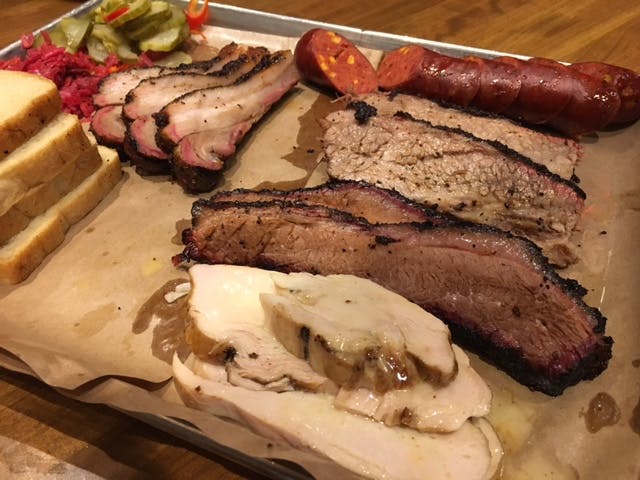 Beef ribs ($38 each) are served after five in the evening only, and are monstrous short ribs (pictured at the top). They get a rub of pastrami spices instead of salt and pepper, and they’re pulled off the pit before they get to the falling-apart level of tenderness. The rib is still tender, but requires a knife to portion off buttery slices of fatty beef. It’s built for sharing, and so rich and hefty I couldn’t imagine finishing one alone. It was the standout cut at Mabel’s.

When I asked Symon how brisket and beef ribs screamed anything but Cleveland style, he was quick to acknowledge his influences. “There are people who have been doing this for a long time,” he said, citing Mike Mills of 17th Street BBQ in Illinois, Billy Durney of Brooklyn’s Hometown Bar-B-Que, and Kent Black from Black’s BBQ in Lockhart. “To not pull from the techniques they use, that would be crazy. Absolutely I did. We leaned on all those people.” Symon chose his barbecue mentors wisely.

Okay, so it’s not a native style of barbecue created from scratch, but there’s an earnestness to Symon’s drive to put a Cleveland stamp on his menu. It starts with the fuel. “The fruitwood thing was important to me because it’s native in Ohio,” Symon noted. The kielbasa is made locally by J & J Czuchraj Meats, and is featured in a pork and cabbage dish that reminds me of New Year’s Day in my mother’s kitchen, our version of Texas’s black-eyed peas. Sorry Mom, but Symon’s is better. Pork ribs and sausage links top a heaping plate of cabbage and sauerkraut (made with Symon’s father’s recipe) that is flecked with pork chunks. It wasn’t a beautifully composed dish, but it had Ohio written all over it, fitting for a plate called “This is Cleveland.”

The Polish Girl is also a Cleveland original. The same kielbasa is placed in a warm bun and topped with barbecue sauce, slaw, and smoked pork belly. You can find the same menu item in town at Hot Sauce Williams or the Seti’s food truck. It’s a whole meal on a bun. Then there are the sides, which taste like elevated version of the sides I enjoyed at every backyard barbecue, funeral, or church carry-in dinner of my youth. Broccoli salad, cucumber salad, and beets brought back memories. Vinegar-doused potato chunks that were fried crisp reminded me of French fries at the county fair. 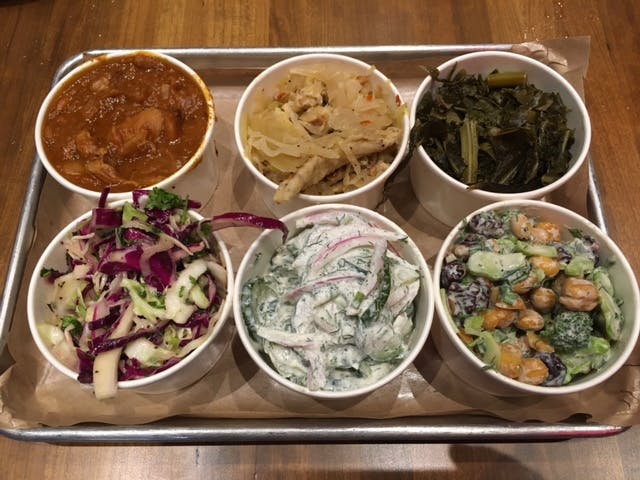 You’d have to go back a lot further than my county fair days to find the real godfathers of Cleveland barbecue. The book Hog and Hominy describes the renowned pork ribs of Eugene “Hot Sauce” Williams. As early as the 1930’s he was using a dry spice rub, which was revolutionary at the time. Williams was successful enough to get a feature in Ebony in 1950 and was routinely referred to as the “Barbecue King” of Cleveland. As far as I can tell, there is no connection with the man and the current Cleveland restaurant of the same name. The original “Hot Sauce” may now be overshadowed, but if there’s any talk of a purely Cleveland style of barbecue, it shouldn’t be done without acknowledging the long history of barbecue in the city, even if the quality hasn’t been so great in recent history. Heck, who knows where we’d be in Texas without a dry spice rub?

Symon doesn’t mention Williams or any other native sons in his quest to (re)define the style (at least that I’ve seen), but it’s still refreshing to see someone trying to write their own barbecue playbook instead of simply copying from another region. I’d say he needs to be joined by a few more joints with a similar focus on local ingredients and recipes before there can really be something called Cleveland style barbecue. Symon is doing his part to create the disciples. He’s been floored by the instantaneous popularity of Mabel’s, where 1,200 customers on a Saturday isn’t out of the ordinary. But he knows it’s not all perfect. “We’re getting closer every day,” he promised. He’s helping Cleveland get closer to its own barbecue style, one squirt of mustard sauce at a time.