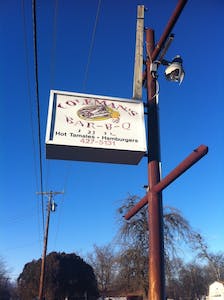 It’s a long drive out to Clarksville from Dallas. It was a sunny Thursday and I had called in sick at work. The deadline for my barbecue assignment was looming and I hadn’t yet come on board as the barbecue editor. A few members of the barbecue tasting panel were still traveling the state and food editor Pat Sharpe was hounding us via email for our final scores. Coleman’s had made the Top 50 list in the previous issue so this was a mandatory visit. Even if it was forced, I was looking forward to the respite from my day job and my first good excuse to get to this secluded small town. I had originally planned a Saturday excursion until I re-checked their operating hours – Monday through Friday only.

The piney woods had given way to rolling fields as I traveled further north. Entering Clarksville I noticed a road sign showing just thirty or so miles to the next town. It was Idabel, Oklahoma. I pulled off the main drag in search of Coleman’s. After winding through some residential streets I pulled into the small gravel lot.  I was the only customer as the afternoon sun poured through the front window onto my small table. After my order had been taken I noticed the banner from last year’s Texas Monthly Barbecue Festival. This visit would determine if they got a banner again this year.

Just after the food arrived I tried to be sly and get a few quick snapshots as the server walked away. In doing so I bumped the dish of steaming hot barbecue sauce and it drenched my jeans and burned my thigh beneath. The next day I would notice the blisters on the side of my hand too. I enjoy the thought of not serving sauce cold, but this was a bit much. Adding to the sting of the sauce was that I just drew more attention to myself than I cared to – even more attention than just being an out-of-towner ordering a full combo plate, a sandwich on the side and a dozen tamales to go. I wiped my jeans as clean as I could get them and commenced with the photos. My photographer friend Nick always told me to sit by the window to capture the natural light, but it was so bright I couldn’t really see the screen. Hoping that I’d captured a decent shot, I dug in. 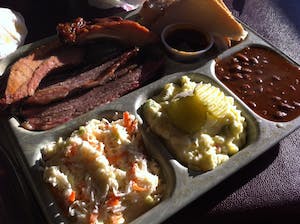 You could see and taste the care they had taken in composing the meal. A cafeteria tray had been filled with the three sides that come with every plate. Spicy ranch style beans had been adequately doctored and a colorful slaw of freshly shredded cabbage and carrots was tossed with a thin mayo dressing. The creamy potato salad had still-crunchy bits of celery. This was not the food service slop often used for this classic Texas trio of sides. It was good honest food.

The pork sandwich was available chopped or sliced. I went for sliced to more easily try a bite or two of the meat sans bun. The generous pile of slices shimmered in the sun. The pale meat had a nice smokering and a good crust. These slices were ridiculously moist and impeccably tender. Even better was that it all came on a large buttered bun. After a few satisfying bites of bread and meat I scanned the ingredients in front of me and committed a bit of Texas heresy. Pork, slaw, sauce and bread just make for a great combination. I had already eaten and still had plenty more in front of me, but that sandwich was history in no time. 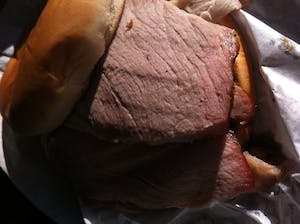 That sauce wasn’t just hot to the touch. The thin but sweet concoction had a kick of heat and flecks of black pepper. It seeped into the pork just like it did in the slices of brisket on the tray. Again, the slices were moist and more tender than I expected from brisket that was sadly sliced with rather than against the grain of the meat. The thin slices helped. That pleasing texture didn’t give way to a very flavorful bite. There wasn’t much smoke and zero seasoning. A few dashes from the salt shaker helped tremendously, but it didn’t come close to the flavor of the pork. A couple bones of baby back ribs didn’t get any sauce, but it could have used some. The meat was dry but came away from the bone easily enough. They had a colorful rub and good flavor, even a little smoke too.

My server was now off the phone and I asked for the owner Miss Coleman. Call-in orders had been coming though at a steady pace and every one of them was for burgers. I could smell the meat frying and the light pouring in the window highlighted the shiny particles floating through the air. I guess the hood wasn’t working so well. Those burgers sure smelled good, but there was no way I could eat one.

Miss Coleman agreed to show me the pit , but she warned me that the empty Bewley smoker wouldn’t be very impressive. It was stone cold back in its own room. Walking back through the kitchen I noticed a prep table with large hunks of equally cold meat partially wrapped in foil. Scraps of cold pork and brisket sat on the cutting board. I had been thoroughly and completely fooled. The ribs were questionable, but not for a second did I suspect rewarmed meat when I was devouring that sandwich.

Miss Coleman wasn’t apologetic. She said they store the meat cold and warm it one of two ways depending on how busy they are. On the stove were two very large vats of sauce kept at a low boil (no wonder the sauce was scalding hot) and thin slices of meat could be dragged through the sauce to bring it back to life. If things got too busy she said that she’s very good with a microwave noting that you must pull out the meat jut before it gets too hot. My attitude has always been to judge the results not the method, but this was testing my limits. In the end my pride was bruised, but my belly was happily full.

On the ride back to Dallas I grabbed a warm brisket-filled tamale from the foil package in the passenger seat. They had been soaked in a chile flavored broth. This is a method favored in the delta areas of Mississippi and Arkansas, but rarely found in parts further west and certainly not in South Texas. I searched for a napkin in the glove box, then grabbed two so I could safely down one more tamale. Coleman’s may not have made this year’s Top 50, but they get my personal award for the best re-warmed barbecue that I’ve tasted and the best tamales I’ve had from a barbecue joint. I bet those burgers are good too.