Texas smoked brisket—especially the good stuff—can be addictive. That’s what President Obama learned last week. After eating John Mueller’s beef ribs for dinner during his stop in Dallas on Wednesday, the President took a whole brisket with him for the ride on Air Force One to Austin. I just can just imagine Obama repeatedly peeling back the butcher paper for nibble after peppery nibble before passing the picked-over remains to his staffers. Good brisket is a dangerous drug, and he was back begging for more the next day, even using his executive powers to skip the line at Franklin Barbecue in Austin. This time the to-go order was a bit larger—eight pounds of brisket, ribs, sausage, and turkey.

Obama’s unplanned visit to the country’s most famous barbecue joint caused quite the media firestorm, but he’s far from the first president who has an affinity for our ‘cue. As the LBJ Library reminded us:

Below, a look at the centuries-long history of barbecue consumed by other Presidents of the United States.

George Washington recorded his barbecue exploits in his journal. On May 27, 1769 he wrote “Went in to Alexandria to a Barbecue and stayed all Night.” It must have been a good one. Washington attended and hosted many barbecues in the years following, and started a tradition that would be passed on to many who held our nation’s highest office.

In Thomas Jefferson‘s journal entries you’ll find more barbecues that he turned down than ones he attended, but this man is Independence Day personified. Not necessarily because he died on that day, but rather because his legacy of creating a nation spawned a yearly celebration where Americans burn more wood and charcoal and smoke more meat than on any other day on the calendar. Thank you, Mr. President.

Andrew Jackson, our seventh president, was the one who made barbecue a regularly featured guest at presidential campaigns. Old Hickory’s supporters would erect “hickory poles all over the country, distributed hickory toothpicks and canes, and served up barbecues fired by hickory chips” as described by UVA’s Miller Center. Jackson himself was also barbecued, at least over the fires of “Public Opinion” in an 1834 political cartoon entitled The Political Barbecue, but come election day he was a popular fellow. “The specifically southern tradition of the election day barbecue…first came to prominence during Andrew Jackson’s presidential campaign of the early twenties,” noted barbecue historian Andrew Warnes in his book Savage Barbecue. Political campaigns and barbecue would become inseparable allies soon after.

Barbecue seemed to be the only platform that William Henry Harrison ran on. Our ninth president was a war hero who grew up in a log cabin and knew how to throw a party. According to Robert F. Moss, author of Barbecue: The History of an American Institution, “The presidential election of 1840 marked the full flowering of the political barbecue in antebellum America.” The big victory of “Tippecanoe and Tyler too” established “barbecue as the premier form of political campaigning in the mid-nineteenth century.”

James K. Polk wasn’t really known for his barbecue skills or passion, but he was the President of the United States in 1845 when the twenty-eighth state was added to the Union. Without Polk, American barbecue wouldn’t include Texas barbecue, and that would just be wrong.

At a campaign rally held in Hillsborough, New Hampshire for Franklin Pierce on August 19, 1852, a large stone pit was built. According to the Getting Pierced blog, “at least one, and possibly more, cattle were slaughtered to be cooked in the oven, which…was specially constructed for the event.” There’s a replica of the pit still standing in roughly the same location, but no word on whether it can still hold an ox.

Abraham Lincoln is famous for plenty, but his penchant for barbecue isn’t one of them. His time as president wasn’t during the most celebratory of times, but the announcement of his Emancipation Proclamation certainly spurred celebrations in the form of barbecues across the Union. It went into effect in federally controlled lands in the southeast on January 1, 1863. The final state to get word of emancipation was Texas on June 19, 1865. That date is still celebrated across Texas today as Juneteenth, usually with public barbecues.

The most memorable menu item from Franklin D. Roosevelt was the hot dogs he served to the King and Queen of England in 1939, but he also had a taste for Southern barbecue. He visited Warm Springs, Georgia, frequently to try and ease his polio affliction. On the evening of April 12, 1945 he was scheduled to attend a barbecue there. Instead, he passed away from an embolism in the early afternoon. This wouldn’t be the only planned presidential barbecue struck by tragedy.

Walter Jetton of Fort Worth was all set to cater a barbecue dinner for John F. Kennedy on November 22, 1963 in Austin. That’s where JFK was headed after his visit to Dallas, but that flight never happened.

Kennedy’s successor would become the most important ambassador for Texas barbecue. Lyndon Johnson used both the White House and the LBJ Ranch in Johnson City, Texas (aka the Texas White House) as sites for his brand of barbecue diplomacy. Walter Jetton was his caterer of choice, and he fed a group of three hundred at the first barbecue state dinner. It was a barbecue held at the Texas White House on December 29, 1963 for the West German Chancellor Ludwig Erhard. LBJ would continue to host heads of state and diplomats at his ranch throughout his tenure, and Jetton kept cooking those famous ribs and brisket for the guests including former President Harry Truman (who was a regular at Arthur Bryant’s in Kansas City) in 1959. Johnson was also a fan of Central Texas sausage, and on at least one occasion had Black’s smoked beef sausage shipped from Lockhart to Washington D.C.

Five hundred guests were treated to a pig pickin’ on the White House Lawn during the Jimmy Carter years. He had his favorite barbecue joint from Georgia, Sconyer’s Barbecue in Augusta, do the cooking. Ronald Reagan also served barbecue at the White House, but as a Californian he brought in a caterer specializing in Santa Maria style barbecue which was Reagan’s favorite. Earlier in his career he made a campaign stop in Dallas and enjoyed a catered event from Dallas-based Dickey’s Barbecue.

Texas barbecue was the preferred choice of George H. W. Bush. Otto’s in Houston was his regular stop where he routinely ate beef ribs and sausage. In 2010 he visited Otto’s on its final day before it closed for good. He also hosted regular Sunday barbecues on the White House Lawn. They became a tradition that his son, George W. Bush continued while in office.

Bill Clinton would sometimes request a delivery from Sims Bar-B-Q in Little Rock to the White House, although he claimed that McClard’s in Hot Springs was his favorite. Now he’s got a bad heart and has gone vegan. Let’s hope Hillary still let’s him sneak a rib or two.

Barbecues on the White House Lawn became just as important to George W. Bush as they had been for his father. A special one to be catered by Buffalo Gap’s Perini Ranch was abruptly cancelled after the events of September 11, 2001. Tom Perini had planned a menu of smoked beef tenderloin, but that meal provided much needed sustenance to the first responders at the Pentagon rather than the president. As Jim Shahin writes in his Smoke Signals column, “the following year, the White House resumed the tradition of the Congressional Picnic. Perini catered it.” 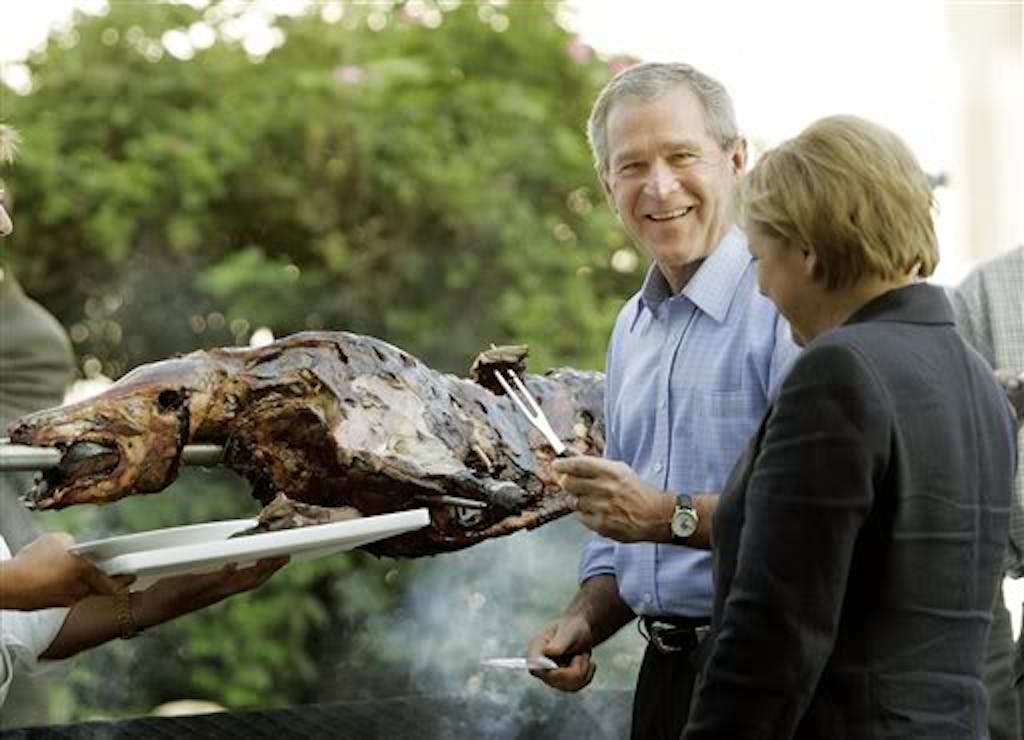 Back in Texas, George W. is partial to Cooper’s Old Time Pit Bar-B-Que in Llano, which he calls his favorite. As a Dallas resident, he has also had Pecan Lodge pork ribs delivered to his house. While traveling outside the US, Bush still had a nose for barbecue. In 2006 he enjoyed spit roasted wild boar with German Chancellor Angela Merkel in Trinwillershagen, Germany.

That brings us back to President Obama whose barbecue lust continues to gain strength. Just before the John Mueller/Franklin Barbecue pairing, he had ordered ribs from Oklahoma Joe’s in Kansas City. These are all big steps up from his previous barbecue ventures. If he’d just ask me to be the Secretary of Barbecue, I’d be sure to steer him in the right direction in the future. Maybe I’ll get to cut to the front of the Franklin Barbecue line with him next time.