This is the original. Started by George Cooper in 1953, but sold to Duard Dockal (who still runs it) in 1983. This is where the family traditions of cooking directly over mesquite coals and ordering straight from the pit were born. It was one of my favorites of mine and Sam’s inaugural BBQ tour back in 2006, but it disappointed a few years later. This visit would sadly be more like the second than the first. 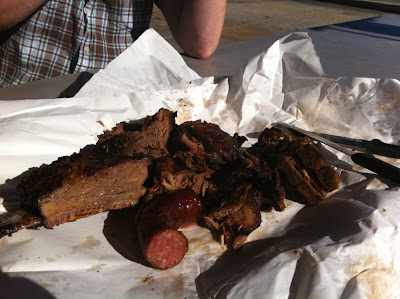 On this day you could see the dried out edges of meat when the pit lid was raised. A thick beef rib was still chewy despite the prolonged warming time, but the hefty cut still had some juice left. Brisket was over-tender and a bit spongy while goat ribs provided the most disappointingly bone-dry meat. With all the sub-par meat here, the goat sausage was a revelation. A mix of pork and goat, these links also get a good dose of spices for a bold flavor that’s not too heavy on the salt and a great snappy casing. Even with the numerous disappointments heaped on the butcher paper, I would return if just for the goat sausage.