The sign may claim that they’ve been smoking since 1953, but this joint opened in 1999. Current owner Mark Cooper is a grandson of George Cooper, so they’re sort for taking credit for a few decades of Cooper’s operation in Mason. The woodpiles and pits are just as impressive as the Llano and Mason versions, but its position at the off ramp of I-10 belies some of the quaintness offered in the smaller towns. 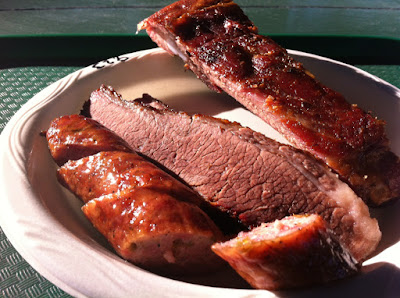 The general theme here is dry, dry, dry. The brisket was tough to pull apart and most of the moisture was gone before it was sliced. Pork ribs hadn’t lost all of their juices, but again the meat was tough. Save for a good fatty jalapeno sausage, this one was hardly worth the effort.