Update: This joint is permanently CLOSED.

2013: This is the second in a dual review. It’s rare to find two barbecue joints with food so similar to one another, but Cotten’s Catering in Calallen and Cotten’s Barbecue in San Antonio are nearly dead ringers. It all goes back to 1947 when Joe Cotten starting selling barbecue in Robstown just south of Corpus Christi. The joint was host to presidents and celebrities and was one of Texas Monthly’s Top 50 barbecue joints in 1997. All of that history came to a dramatic close when a fire erupted on March 2, 2011 and destroyed the much heralded Joe Cotten’s. Its burned out remains stuck around for months while owner Cecil Cotten hoped that it would be rebuilt as did his brother and Joe Cotten’s manager Kenneth. The cause of the fire was never determined, and the rebuild never happened. The building was leveled in early 2012, but the empty lot and the lonely sign still remain along US Highway 77.

Kenneth Cotten was a manager at Joe Cotten’s. The fire started during dinner service, so he and dozens of employees and patrons watched it burn. After plans for rebuilding didn’t materialize, Kenneth moved to San Antonio to open a new location of Cotten’s Barbecue. It’s in a strip center, but the space is enormous. There weren’t many customers when I was there in a Wednesday night, but I sat at the bar anyway hoping for a quick stop and a to-go order.

There wasn’t a menu, at least one wasn’t offered. The bartender recited the options for plates, and I went with the three meat option. I didn’t specify lean or fatty, so I got lean. From what I’ve read the menu denotes a “stringy brisket” option which I surmise to mean fatty. I’ve just never heard it referred to like that. I was driving, so I also missed out on the white peach sangria and the prickly pear margarita just added to the menu too. When the bill came it was a comedy of errors. The credit card machine was out, but the bartender said she’d just do it manually. They needed my ID as well. Those were held hostage for ten minutes before I realized they were sitting on the other side waiting for what I wasn’t sure. I offered to pay cash and get out, but the sale had already been made. I just needed my receipt. The bartender huddled with two other employees in what I thought was a discussion about my receipt, but they all dispersed into different directions, none toward my seat at the bar, as my card sat there. I had my food by now, but had to walk over to a manager and ask for a the receipt before it found its way back along with my credit card. It was finally time for dinner. 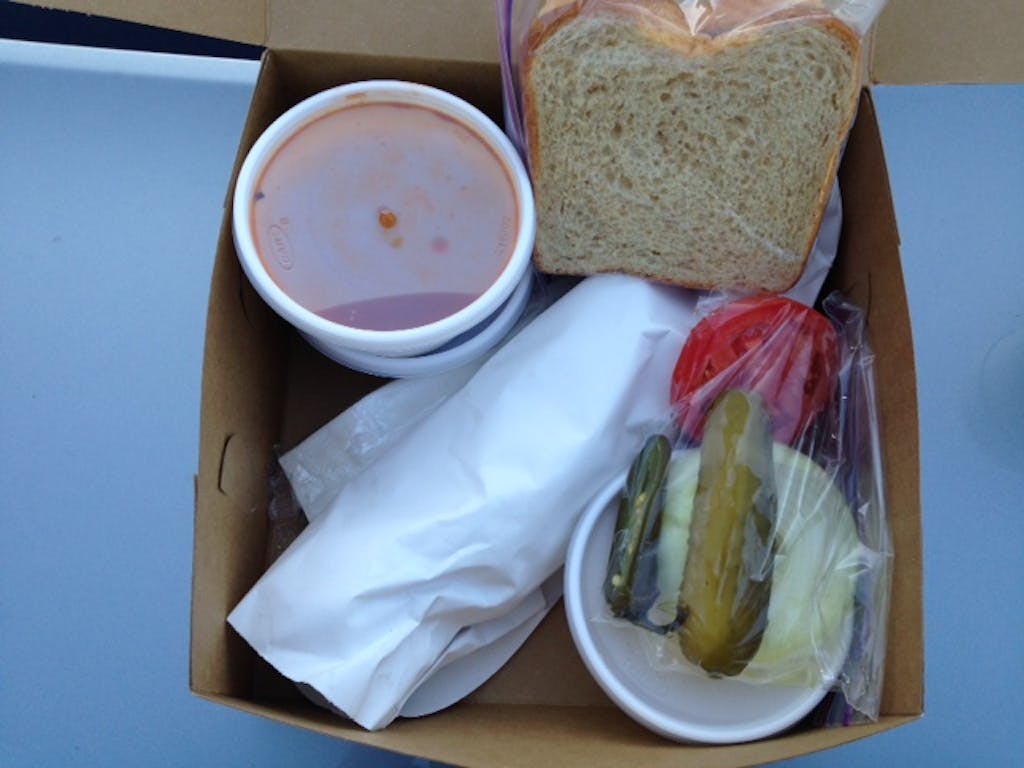 The food was packaged exactly as it had been in the Calallen location. Just one taste of the beans, potato salad and sauce confirmed they were the exact same recipe that was being used in Calallen as well. The taut sausage link bursted with juice and flavor while the pork filling was well seasoned. The pork ribs needed more time in the smoker to tenderize and to pick up more smoke, but their black pepper kick was pleasant enough. The smoke on the brisket was much more pronounced, as was its girth. This was the thickest slice of brisket I’ve ever been served. It nearly equaled the rib and the sausage link in width. It didn’t help matters that it was a tight slice of flat which was a bit dry and undercooked. It took some real jaw power to put away a few bites. I thought this might be an anomaly until I read a number of online reviews complaining of this very thing. Brisket is already a tough cut of meat, so it’s just adding one more potential problem to slice it so thick. 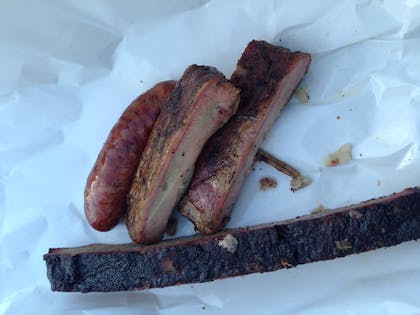 Service issues aside, this new version of Cotten’s Barbecue is still serviceable. Seeing the consistency between the food served here and at the family’s other location in Calallen is heartening. It’s good to know that family traditions can be carried on over such a long period, and in this case a long distance. Now I’m just hoping that thick brisket slice can become a thing of the past.