This is the first in a dual review. It’s rare to find two barbecue joints with food so similar to one another, but Cotten’s Catering in Calallen and Cotten’s Barbecue in San Antonio are nearly dead ringers. It all goes back to 1947 when Joe Cotten starting selling barbecue in Robstown just south of Corpus Christi. The joint was host to presidents and celebrities and was one of Texas Monthly’s Top 50 barbecue joints in 1997. All of that history came to a dramatic close when a fire erupted on March 2, 2011 and destroyed the much heralded Joe Cotten’s. Its burned out remains stuck around for months while owner Cecil Cotten hoped that it would be rebuilt as did his brother and Joe Cotten’s manager Kenneth. The cause of the fire was never determined, and the rebuild never happened. The building was leveled in early 2012, but the empty lot and the lonely sign still remain along US Highway 77.

It was longtime Joe Cotten’s employee Jesse Pena who first got back into the local barbecue game. He opened Mr. G’s BBQ in Corpus Christi in late 2011 using the same cooking methods and the famous Cotten sausage recipe. Then last year, Joe Cotten’s grandsons Michael Cotten and Chris Knaus started a take out only operation in Calallen just west of Corpus Christi. It was an instant hit for long-time fans, and they even got a chance to cater for country singer Josh Abbott and football star Johnny Manziel. The name of this new joint wasn’t a hit with their great uncle Cecil Cotten. He owns the naming rights to “Joe Cotten’s Barbecue” and “Cotten’s Barbecue” and asked his nephews to change the name almost a year after they opened. The “BBQ” portion of the sign is still ghosted on the header over the door, but the methods are all the same. They’ve also since added an attached dining room.

The menu is simple. Order meat by the pound, a sandwich or a plate. The plates come with one, two or three meats for the same price. The rest of the order is filled out with some Joe Cotten signatures – a pickle spear, a slice of onion, a slice of tomato, a half jalapeño, white bread and their famous sauce and beans. The sauce is thick and tomatoey. With the onions and peppers and very little sweetness, it’s more like a ranchero sauce than a typical barbecue sauce. The pintos are covered in a rich broth studded with spices. A side of mashed potato salad was a great complement to cool things off. It was all well executed and so neatly packaged. Each item had its own bag or container, and each of the meats was wrapped in wax paper. It all came neatly stacked in a cake box like a personal picnic. 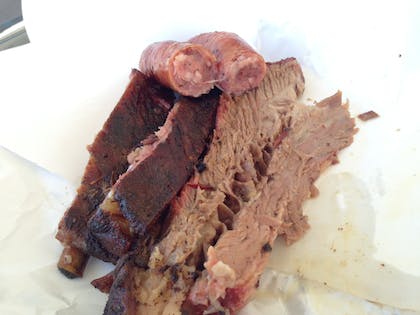 As I unwrapped each meat it was obvious the ribs were going to be good. The well-formed crust was deeply colored. The smokiness of the mesquite was very apparent. The texture was also perfect, but what was missing from this well smoked rib was some seasoning. They didn’t hold back on the salt in the sausage. The pork casing snapped and juice squirted a bit. The link was smoky, salty and juicy. There isn’t much more you can ask for in a good sausage. The brisket easily brought up the rear here. The flavors of the smoke and seasoning were washed out. The texture was also a bit off like it had been cooked to quickly. Holding the meat in foil under the heat lamps didn’t help.

I never got to eat at the original Joe Cotten’s, but even some nostalgic friends admit that the sliced brisket wasn’t great. Maybe this location is just true to the original. That’s really the point anyway. This is a continuation of a family legacy and regional barbecue tradition. That doesn’t often happen into the third generation, so we should be thankful. A great plate of ribs and sausage isn’t that easy to come by either.