This joint might as well be a Texas legend. I’ve heard so much about it from magazines, friends, and readers that I was dying to make it over to this storied establishment. In my research, I noticed the scorn heaped upon the new metal building with the cheesy awning reminiscent of Caligula XXI in Dallas. As I gazed at old photos on the wall of the now abandoned building next door that used to house the Country Tavern, I’d have to agree.

Lights are turned way down in this joint, which feels more like a bar with the prominent pool table, juke box on the back wall, and tight-jean-clad waitresses. We appropriately sat at the bar, which had an odd slope toward the stool side. Luckily we didn’t spill anything. A leftover receipt for $60 with a not so generous $2 tip written in made me wonder about the service we were about to receive. I had no reason to worry, as a perky young thing was happy to bring us a couple of frosty schooners to let us settle in and decide what to eat. 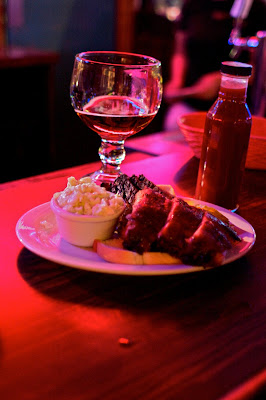 As you readers may know, it didn’t take long to decide that I’d order up a plate of ribs and sliced brisket. Ribs made these folks famous, and in true East Texas style they were served wet with a sticky sweet sauce. The incredibly tender meat was moist, almost mushy, and lacked smoky flavor. The basting didn’t allow a solid crust to form, and the flavor of the sauce was about all there was to it. Anyone favoring the Memphis style would enjoy these baby backs, but they weren’t a good example of smoky Texas ‘cue.

The brisket was better. These lean slices of beef were tender if a bit dry. A good smoke line was beneath the well-formed crust, and each slice a solid level of smokiness. The sides of classic BBQ beans and slaw were also a good accompaniment. The beans had a good kick to the flavor of the sweet sauce and the cole slaw was still crisp with just the right amount of dressing.

It may have been oversold, or I might have just had too high of expectations, but this joint just left me wanting more from the experience. Guided by comments from jilted former customers, I took the road south out of Kilgore to try out the competition.