A couple months back I served the worst version of barbecue that I’d ever cooked. The guests were warned my smoked beef gooseneck was an experiment, but the result was just plain bad. The meat shredded apart into dry flakes. The cut, technically a bottom round flat, looks like a brisket, weighs as much as one, and even has a fat cap—but that’s where the similarities end. 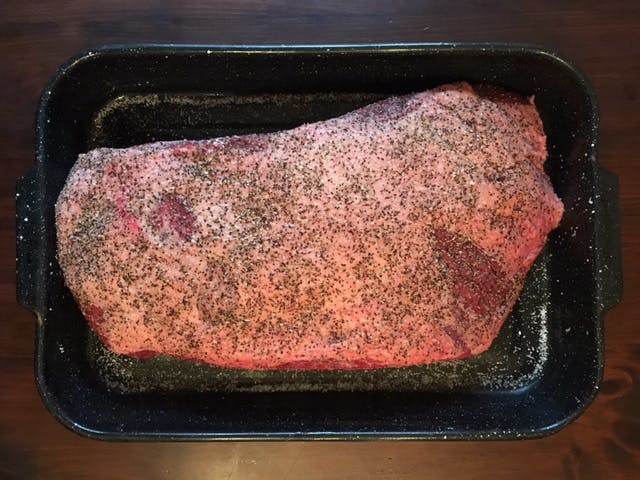 The previous attempt at bottom round flat was a failure in moisture retention. Moisture, or juiciness in meat, comes from three things: collagen, fat, and water. Brisket is so revered in barbecue because a long bath in the smoker turns a poor cut into a great bite of beef. That long cooking time is needed to turn its generous amount of collagen into gelatin, the magical stuff that feels velvety on the tongue. The intramuscular fat also melts during the cook, adding to the juiciness. A low-and-slow cooking method is helpful because it drives water out of the meat at a slower rate, but brisket can provide enough gelatin fat to still taste juicy even if it loses a lot of its water.

A bottom round flat has a similar muscle structure to a brisket in that they both have large, tough fibers. The difference is that the round is nearly all lean muscle. There’s hardly any fat and collagen. For juiciness to remain in the bottom round flat, you better hold onto the water. One way to do that is less time in the smoker.

I smoked a section of round to medium rare in a hot smoker, about 400 degrees, to cook it as fast as possible. The problem was that by the time the interior got to 120 degrees, the majority of the meat was overcooked. Still, sliced very thinly against the grain, it was palatable. To further test the theory, I put another chunk in the oven at 200 degrees to get it up to medium rare very slowly. It was pitiful. It was time to start over.

Why not give the Texas crutch a try? Wrapping a partially smoked brisket tightly in foil to finish it off is an old trick (I had used the far more breathable butcher paper in my previous failed attempt). It retains moisture in the meat, and allows large cuts to cook even faster. 44 Farms thought I was crazy to try and smoke this cut, but they gave me a smallish (1o pound) bottom round flat to try anyway. I seasoned it with salt and pepper, and set my smoker up for a 275-300 degree cook. I wanted to give it a jumpstart and get some good color on it. To promote a better bark, I sprayed it about every thirty minutes with a mix of equal parts water, Worcestershire sauce, and apple cider vinegar. Four hours later it had plenty of smoke on it, and had reached 130 degrees internal.

I wrapped it tightly in heavy duty foil and moved it to a 250 degree oven (yes, an oven. If it’s wrapped in foil already, you’re just wasting wood if you leave it in the smoker). After four hours in the oven, the bottom round flat had reached 190 degree internal temperature. After bumping the oven up to 350 degrees, I carefully removed the foil from the meat and the saved the liquid. There was a full cup of fat and another two cups of smoky beef juice that had come out of the meat. The meat went back into the oven for a brief thirty-minute roast to firm up the bark again. 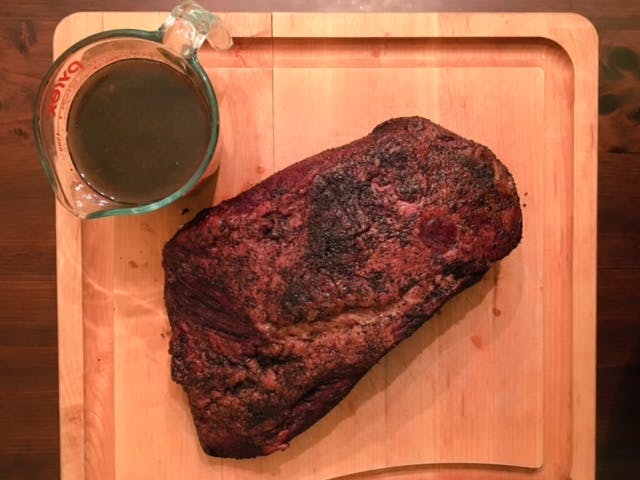 It was a success. The beef was tender and still juicy. The bark wasn’t as great as I’d like, and smoke flavor was also a bit muted, but I had to remind myself that this wasn’t a brisket. 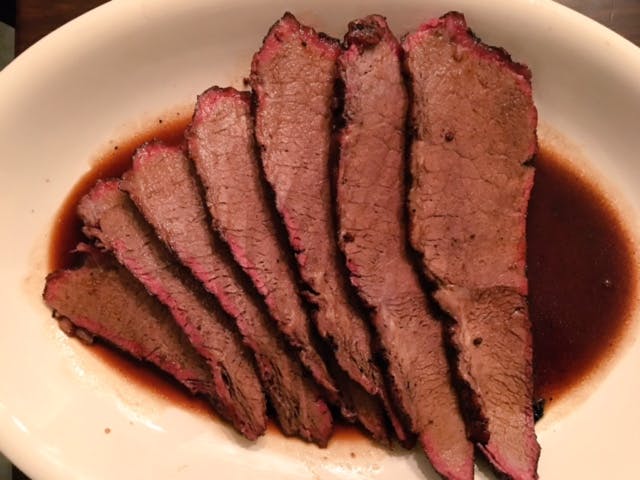 Thankfully, I’d collected all that liquid from the beef, and I poured the smoky, salty broth over the sliced beef. The photo above is just of the thin side of the bottom round flat. The thicker end is the rump roast, and slices from there resembled fatty brisket in tenderness, but didn’t quite have the fat content. Still, it was a successful dinner with a plate of smoked beef I was proud to serve.

Admittedly, this was a personal problem-solving exercise. I wanted to find a way to cook this cut of beef successfully, but it will never be as good as a well-smoked brisket. The brisket is just perfectly designed for barbecue, but if you find yourself stuck with a bottom round flat, there’s hope as long as you have a roll of aluminum foil.