Chicharrón, pork rinds, gratons, cracklins—call them what you like, but fried hog fat with the skin on is a wonderful thing. I recently attended a Louisiana boucherie (what is essentially a communal gathering where a whole hog is butchered and broken down; read more about it here), and I was able to witness how these chunks of fatback become crunchy, salty, spicy nuggets of happiness. It’s not as simple as dumping pig fat into hot oil.

At the boucherie, different cuts were used for various dishes, and the layer of fat and skin was harvested for the cracklins.

I parked myself in front of a black pot filled with hot oil. A team of cooks cut the back and belly fat into strips about an inch wide, and then into cubes from there.

A propane torch heated the fat to 300 degrees as chefs Chanel Gaudé and Bart Bell slowly stirred in the chunks of fat. Adding the fat cooled the oil down to about 250. For this 275-pound hog, four separate batches were required in this pot.

At first the chunks of fat were barely submerged in the oil, but as the fat rendered out, the solid turned to liquid.

Nearly constant stirring was required, especially scraping along the bottom of the pot to keep anything from sticking. This step took about an hour for each batch.

They were then scooped out into a cardboard box to cool. A few people came up to grab one, but this was only the first step. Much like a good, crispy French fry, a good cracklin needs to be fried twice. These chunks of par-fried fat tasted fine, but were tough to chew.

Once the first batch was cooled, it was time to crank the heat up in the frying pot to 400 degrees. Once it was hot enough, the cooled cracklins went back into the hot oil for their second bath. This is where they puff up (click here for a time-lapse video of the process) almost immediately after hitting the hot oil. They then cook for about five more minutes until crisp and ready for seasoning.

When the seasoning went on, we all underestimated how much would be required. They just kept shaking on what seemed like too much until the heat and salt finally registered properly.

The finished batch was the best version of cracklins I’ve had. They key is eating them when they’re still hot from the fryer, and my ringside seat paid off. 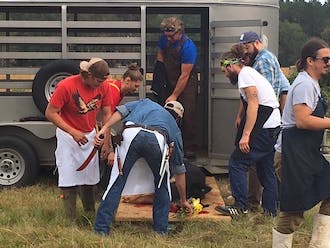 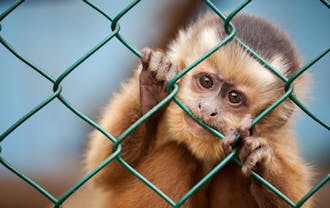 Monkeys, Humans Camped Out in RV Near Texas-Louisiana Border