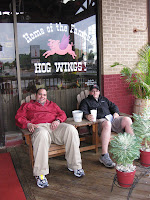 This little joint in Athens is known for “Hog Wings,” and they are incredible. Petite pork shanks cut to resemble chicken legs are rubbed and smoked to a perfect tenderness and served with a sweet and spicy asian mae poy dipping sauce. The smoky meat didn’t need the additional sauce, but they did work well together. 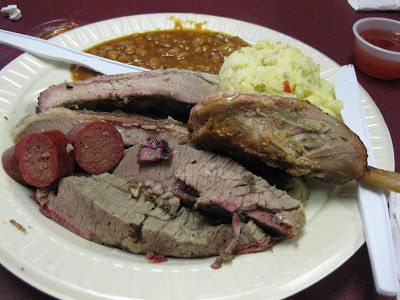 Other meats are offered including the standard brisket and ribs. The gray ribs failed to impress. A hint of smoke could be found in these tender ribs, but a well-formed crust was lacking as was any complex flavor. The tender brisket was better, with a nice smoke line and a good smoky flavor. The crust had been nearly removed, so the robust flavor was lacking, but these were solidly good slices. Besides the standards, a great version of hot links that are available. These links have no resemblance to the hot dog-like versions found so often elsewhere. The coarsely ground meat had a deep red line below the casing, and a good black pepper kick contributed well to the flavor of these great links. 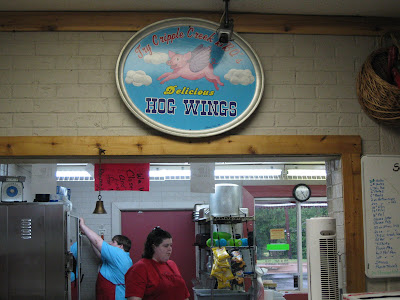 The sides here all seemed to start right out of the can, but they had all been doctored up a bit to make them Cripple Creek’s own. The baked beans had flecks of dried onions, and the potato salad had a good mustardy kick. Service at the tables was also friendly. I was offered a free hog wing as a starter just for asking what they were.

While the brisket and ribs didn’t exactly wow us, the hog wings and the hot links were so good we just had to bump up the rating.