River Cottage is a Cooking school in rural southwest England that focuses on the use of local and ethically raised meat. In England, River Cottage’s chef Hugh Fearnley-Whittingstall has been the host of several food related television shows and the group has published a number of focused handbooks on subjects ranging from mushrooms to booze. The latest in these handbooks, released in the U.S. in April, is No. 13 on the subject of curing and smoking meat. 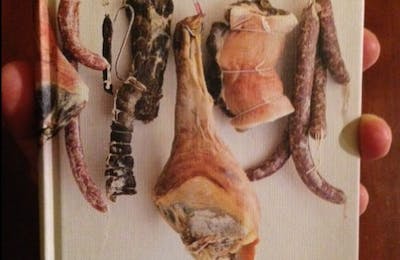 Curing & Smoking reads like a textbook, in a good way. The book is very strong in the “how” department, but there’s just as much in here on the “why” as well. You’ll be well beyond the halfway point before the principles of meat curing give way to the recipes. There are explanations of how salt acts upon meat in the curing stage, the difference between good and bad bacteria during aging, why mold can’t hide on the middle of your salami (hint: they’re aerobic), and a scientific explanation of how cured meats retain their red hue (hint: buy the book).

The tone of Curing & Smoking makes the whole endeavor of curing meat seem attainable. The author puts the reader at ease with a process that can feel overwhelming so that is seems less daunting. There’s also plenty of emphasis placed on the humble nature of the cooking apparatuses, like the makeshift smokers they use at River Cottage, so as not to deter the beginner.

It might seem trivial, but I also like the size of the book. It feels like a tool in your hand, and the rugged cover says it means business. Feel free to splatter some ground meat over the pages, but don’t cover up any of those beautiful photos that accompany the very clear step-by-step instructions for classics like pancetta and prosciutto. Beyond familiar charcuterie recipes, there are a few that were new to me like pine-smoked mussels, a goat violin which is basically a goat leg a la prosciutto, and venison biltong which results in something similar to beef jerky.

Incorporating both curing and smoking, the recipes start off with bacon. This is the bacon we know and love in the States, but in England they call it “streaky bacon.” This is about as complicated as the smoking recipes get. With an emphasis on cold-smoking, you won’t find a recipe for a brisket or a rack of ribs, or even simple smoked sausage, but that’s where this next book shines. 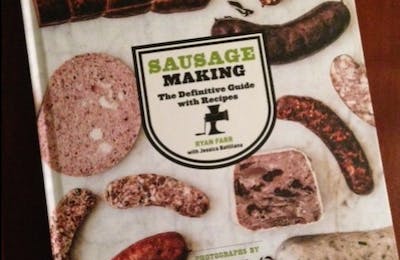 4505 Meats began in San Francisco selling chicharrones on the streets and in local bars in 2009, which eventually led to them opening a full service butcher shop three years later. Just within the past month they went from only selling cured meats as a retail shop to entering the barbecue market. 4505 Burgers & BBQ is serving brisket, pulled pork, and ribs to a smoked meat-starved city. Oddly, the only sausage on their new menu is a hot dog..

If you’d rather make those sausages at home than get them at the butcher shop, they’ve provided thirty-eight recipes of their favorites in a new cookbook. Chef Ryan Farr was inspired to share his knowledge of sausage making after realizing just how bad supermarket hot dogs can be. “[O]nce mass-produced factory sausages became the norm, the quality of commercially available links suffered.”

The recipes are organized in order of texture – Coarse, Firm, Soft, and Smooth. And each category comes with a Master Ratio of meat (lean and/or fatty) fat, liquid, and salt so you can replicate the same style using different ingredients.

Next to every recipe is a length-wise cross section of the sausage from that recipe to help you picture the end goal. You’ll find plenty of unique sausages like guinea hen and kimchee, smoked trout and pork sausage, and even a Cajun boudin. Then, for those seeking a challenge is the fabulous looking whole suckling pig ballotine stuffed with bacon and sausage. Toward the end there’s also a bonus section on condiments to serve with the sausage.

Most helpful to novices who have never stuffed a casing are fifteen full color pages in a row showing the complete sausage-making process from chopping the meat trough grinding and seasoning, and all the way to making the links. This helps to show that this is not a collection of recipes that serve only as an advertisement for 4505, but a real effort to teach. If you’ve never attempted to make your own sausage, this is a great place to start.