John Brotherton and Jay Yates seemed headed in different directions in the barbecue business until they found a way to work together. Both started with their own food trucks. John ran Hall of Flame BBQ in Pflugerville, but it closed earlier this year. Jay was successful enough with Curly’s Perfect Pig that he decided to make a move into a permanent building in downtown Round Rock. After John had shut down Hall of Flame he traveled the state sampling barbecue to fill his smoked meat void, but he still had the itch to cook for people. When the road trip tour ended, he called Jay and they decided to work together. Soon after, Curly’s Carolina, TX Barbeque was born.

The building is only half done. A shell space on the right should be operational by January. For now there’s a small space on the left with a few tables and very little standing room. Out back you’ll find two smokers. A standard offset smoker is reserved for briskets and is fueled with oak. A big vertical smoker uses pecan for the pork shoulders and ribs. It’s all cooked with wood, but there are no coals. We love our smokers here in Texas, but in the Carolinas the pork shoulders and whole hogs are cooked directly over hickory coals. It creates a flavor similar to the Texas Hill Country style of cooking, but doesn’t taste much like slow smoked pork. I questioned Jay and John about this and Jay hoped to have a direct-heat cooker operational soon and even hinted that whole hogs could be on the horizon. Until then, the meat won’t have much Carolina flavor until you squeeze on the vinegar sauce. 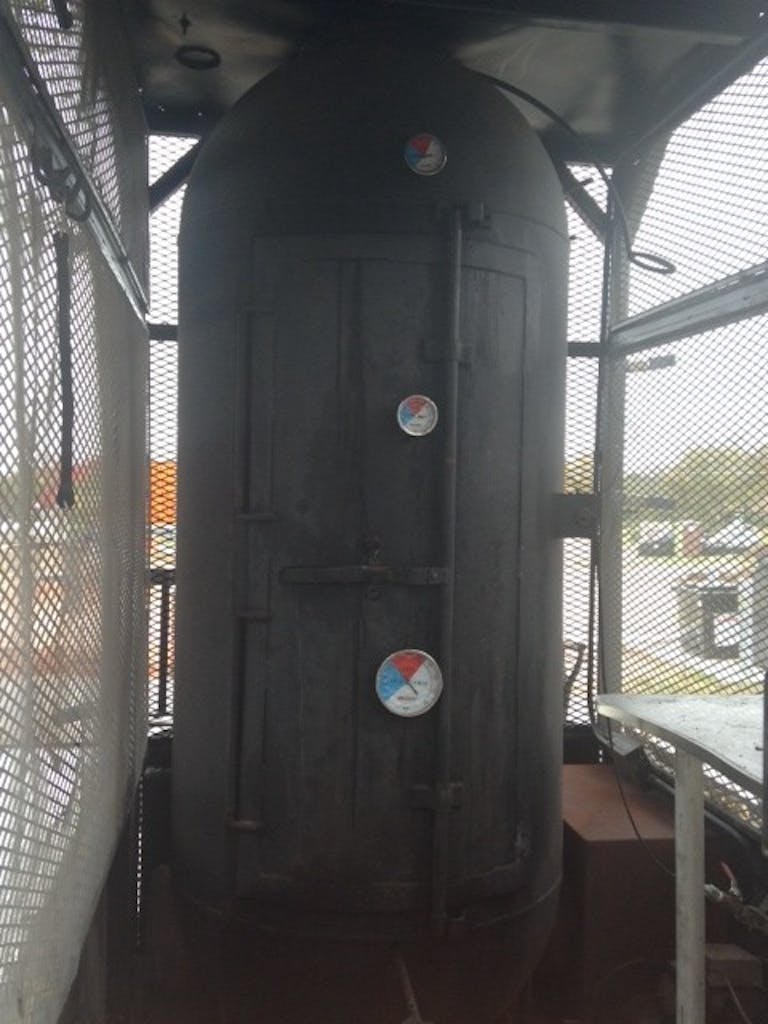 There were a few more Carolina staples on the chalkboard menu at the counter. I wanted some hushpuppies and fried okra, but the fryers were down. Instead I went for mac & cheese and the wasabi cole slaw with my Carolina, Texas Trinity plate. This trinity includes sliced brisket, spare ribs and pulled pork. I have to admit that I ordered the wasabi cole slaw only to see if it was as bad as it sounds, but I was pleasantly surprised. It’s a mix of crunchy cabbage, ramen noodles, sesame seeds and just enough wasabi for a kick, and it was really good. The runny mac & cheese wasn’t as successful. 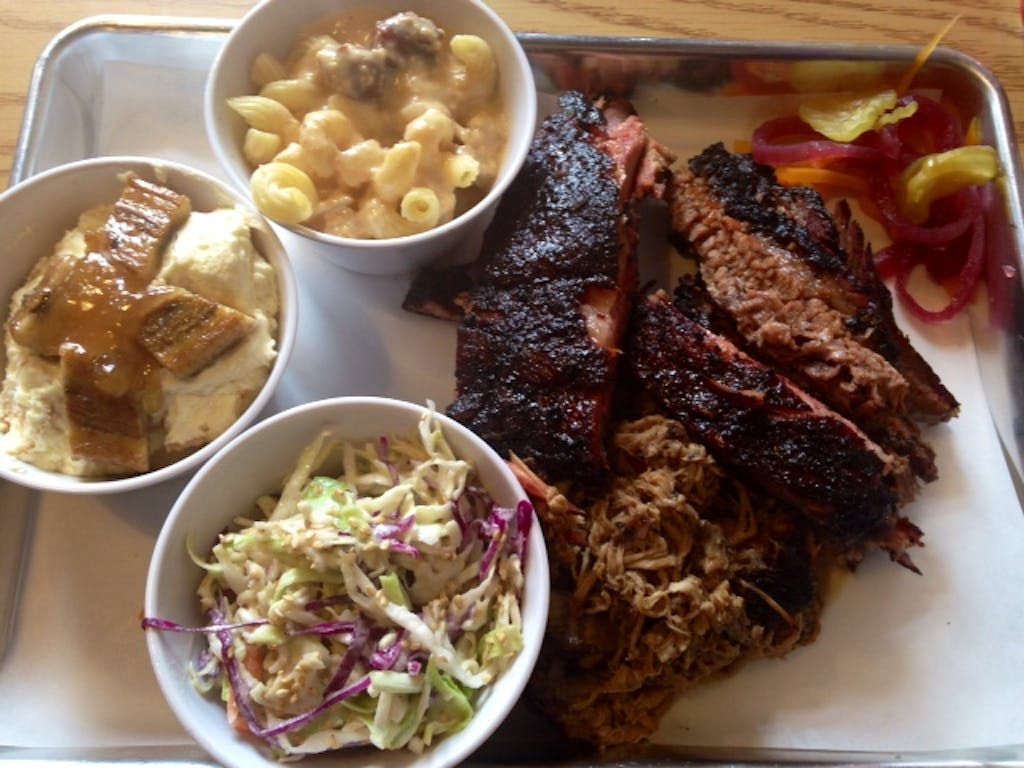 Orders are taken at the counter and brought out to the tables. This can be uncomfortable if you’re used to dealing directly with the carver, but the barbecue on my plate looked promising. Ribs had a great bark and a good smoky flavor. The meat could have been more tender, but it was still a good pile of bones. Given all the dark and crusty bits int he mix, I was hoping for more flavor from the pulled pork. It was plenty moist, but it needed some of the sauce to liven it up. If you reach for the sauce, there are three options. A thin vinegar sauce provides a solid rendition of Carolina flavor. I liked the mustard sauce best which uses a hearty German mustard as the base. It was the perfect marriage of Central Texas and South Carolina. A third sauce was a moderately sweet tomato sauce with a bit of chile powder. It worked well even with the brisket. 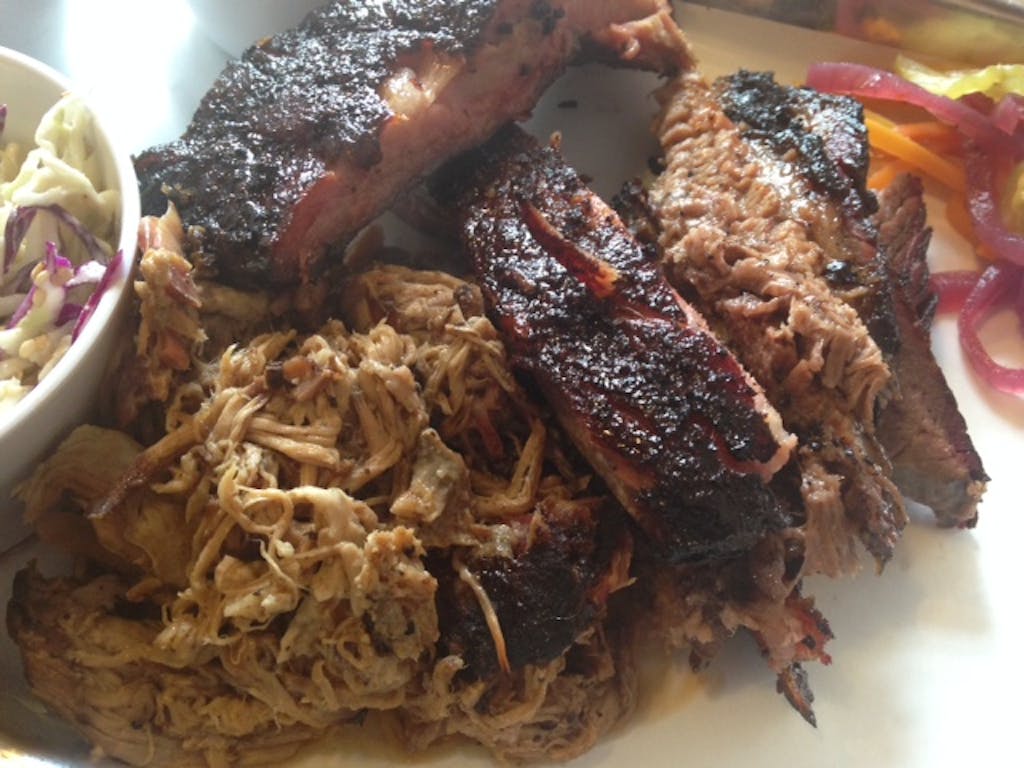 It was the brisket that I was most impressed with. There’s a bit of sugar in the rub which helps with the well-formed crust, but it wasn’t over-seasoned. The meat was tender and juicy with a line of well rendered fat. This was well respected brisket that I’d be happy to return for. If only they would give the same respect to banana pudding. They smoke bananas to top the pudding which makes it even more puzzling why they’d use fake banana-flavored pudding as the base. 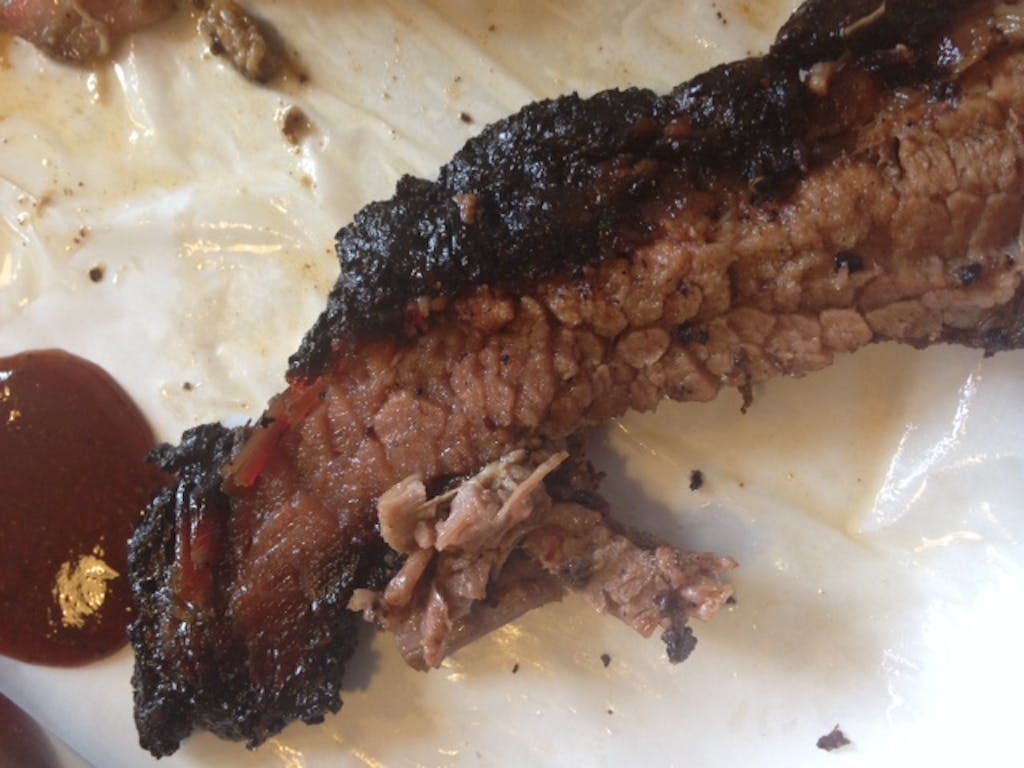 I liked the idea of mixing the styles of barbecue. Texas barbecue has been co-opted by barbecue joints across the world, so there’s no reason we can’t steal a little from North Carolina. The thing is that when you choose to replicate a style, it needs to go deeper than the sauce. They do Texas very well here, but until they start cooking with coals, the Carolina side has a ways to go.