Just outside of downtown San Saba is Double G Pit Stop, a combination drive-thru beer barn and barbecue joint. You can get a drink any day, but for barbecue you’ll have to wait until the weekend. Owner and pitmaster Bobby Galindo only fires up the pits on Saturdays and Sundays, and the smoke wafts across Wallace Street from morning to early evening. 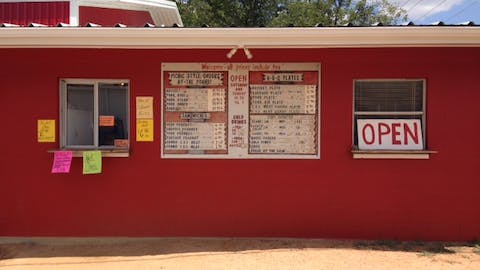 It’ll take a while to mull over the large menu painted onto the side of the building, but they’ll be patient with you at the walk-up window. You can also choose to eat at one of a few tables inside the small dining area. That’s where I ended up after Galindo let me hand pick a pork chop from the pit. He then led me to the far cooker where another round of his signature pork steaks were just finishing up. Along with the large spare ribs, I had tripled up on pork, but you won’t find the pulled variety. Galindo thinks it was invented by accident after a pork butt was forgotten about in the back of a pit long ago. A half chicken and a slice of brisket also made it onto my plate, which was a repurposed cardboard beer tray.

All of the meats are seasoned simply with salt and pepper. Galindo scoffs at other pitmasters who fool with fancy rubs. “All they’re doing is wasting their money on spices.” He also gets all he can out of that salt. On Thursday he seasons the meat and places it together in large tubs which sit in the cooler until he’s ready to begin cooking early Saturday morning. It gives the meat a distinct cured, hammy flavor. Even in the dense, triple-thick chop, it was well seasoned to the core. When I ate on a Sunday, the cuts had been sitting in salt for four days, and it affected the texture of the meat. Even with a plastic knife, the slices left a clean cut edge instead of the fibrous texture you’d expect. The meat fibers had tightened in the curing process, but it wasn’t tough. The pork was like a mix between smoked ham and a grilled pork chop. Slices of the pork steak were similar, but more tender. With more surface area for seasoning, and better marbling, I preferred it slightly over the leaner chop, but you won’t be disappointed with either. Both are at once unique and familiar, but with a deep flavor from the mesquite coals.

Galindo’s been cooking barbecue since he was in high school (where he played football against Terry Wootan who owns Cooper’s in nearby Llano), and in that time he’s learned some tricks. His meats are cooked over mesquite coals which requires the mesquite to be burnt down in a separate burn box. He needs coals all day long. He doesn’t want the fire to go out, but he also doesn’t want to burn up all of his mesquite. A friend nearby gives him all the pecan he needs, so he mixes it in as a sacrificial wood. “Pecan burns slow, but it just turns to ash. The coals aren’t as good to cook with as mesquite,” he notes.

By 2:30 in the afternoon, those coals had done a number on the chicken. It was likely a juicy bronzed bird a few hours before, but it looked deflated and wrinkled by the time I sat down. It had great flavor, but was beyond overcooked. The brisket veered in the other direction. This cut can naturally be tougher when cooked over direct heat, but I could hardly pull apart the slices from the lean end. The slicer also did themselves no favors with a thick cut. Finishing up with more pork was a smart move since the large spare ribs were tender with a nice bark and plenty of salt and pepper. 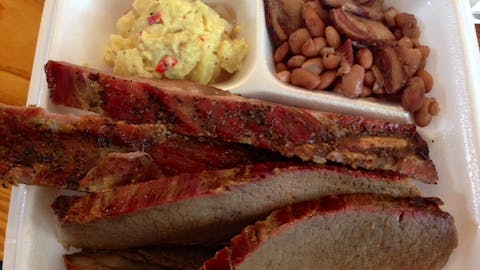 I guess I asked too many questions because as I left, Galindo wondered aloud why I was so inquisitive. I fessed up and he said he thought it was puzzling why he’d never made it into Texas Monthly after almost three decades in business. He laughed it off saying he’s done with worrying about accolades coming in from anywhere. “As long as I’m making a living doing what I’m doing, I’m happy. If my product isn’t any good, people ain’t gonna come, so I guess I’m doing okay.”