East of Dallas, there’s a twenty mile stretch of Highway 205 that connects Rockwall and Terrell. Right in the middle is a converted barn, complete with a grain silo, that houses Eddie Deen’s BBQ. You might know that name because you’ve had a catered meal at the Eddie Deen Ranch in downtown Dallas, or maybe you’ve attended a recent Texas gubernatorial inauguration, but the Deen family has opened several restaurants around the area over the past few years.

I never made it to the Deens Jackson St. BBQ in Kaufman before it closed. Smokey’s in Fort Worth was great before they sold it, and Crossroads BBQ is the best barbecue option in Arlington. A few months ago I toured the large facility in Terrell where most of the food is prepared for the Eddie Deen barbecue empire. Two big Oyler rotisseries cranked out smoked briskets, ribs, sausage, and chicken, and I was able to taste a little of everything. This was Eddie Deen’s barbecue at its best – straight from the smoker – and it was good. But I wondered how good it would be after it was packed and shipped up the road to the restaurant. You see, nothing is smoked at the Eddie Deen’s BBQ on 205.

I arrived right when they opened for the day at 11:00. The meats were unwrapped and laid on the board for slicing. The brisket was a fresh one. I asked for the jalapeño pulled pork, and a few slices of pickled jalapeño were chopped fine and tossed into the already-pulled meat. Slices of chicken breast and a couple ribs rounded out the four meat plate. Sides like a crunchy mayo slaw, an oregano-heavy pasta salad, and mustard potato salad are self-serve from a cooler. Warm barbecue sauce and beans fortified with leftover barbecue and pico de gallo are ladled from a warming tray. 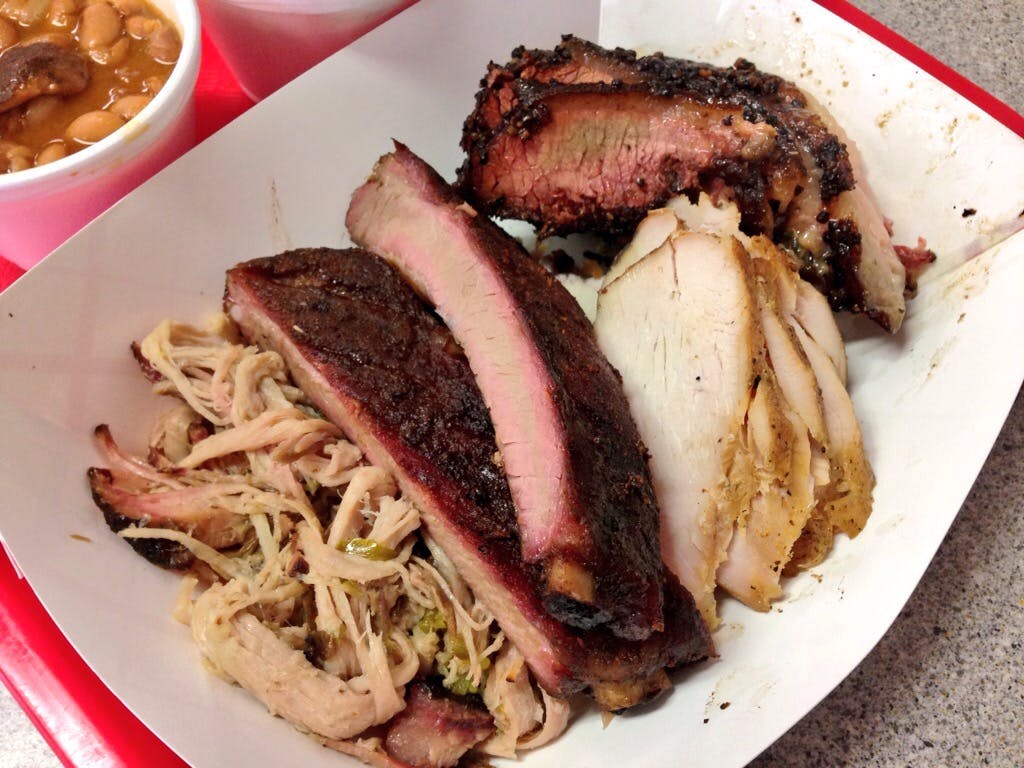 The ribs were tender, but the dull surface didn’t match the glossy, sweet glazed ribs I’d had a few months earlier. There was a nice level of spice in the rub which gave the ribs some bite. They were actually spicier than the tame jalapeño pulled pork. The underwhelming pork required some sauce to give it a boost in flavor. 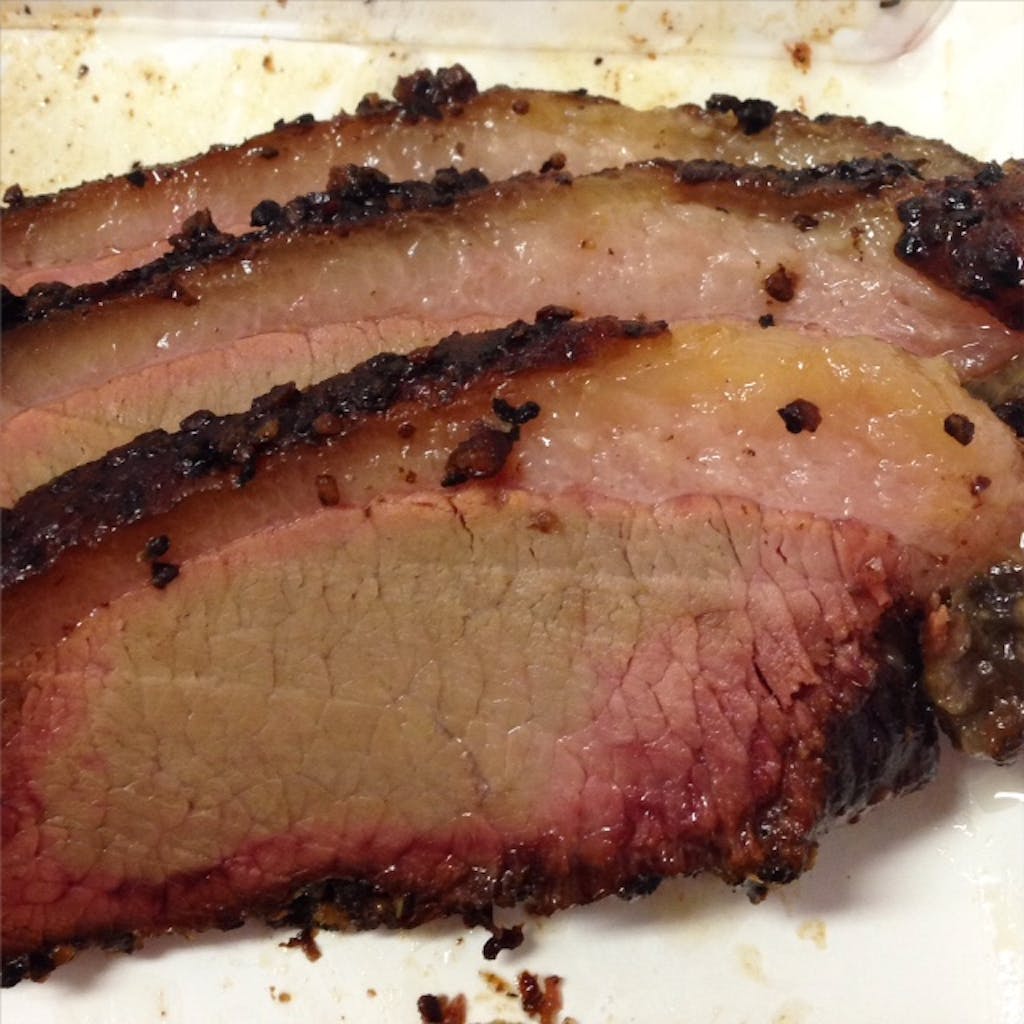 Slices of the white meat chicken were remarkably moist. Chicken breasts are brined before being smoked, so that’s got to help them stay juicy, but I’m guessing my visit early in the day also helped. The chicken had a mild, but adequate smokiness too. Of all the meats, the brisket was the most impressive. It was heavily seasoned with salt and cracked black pepper. Each slice had a line of well rendered fat along the edge, and it was all moist, tender, and smoky. This was brisket worth seeking out whether or not it came from a smoker a few miles down the road. 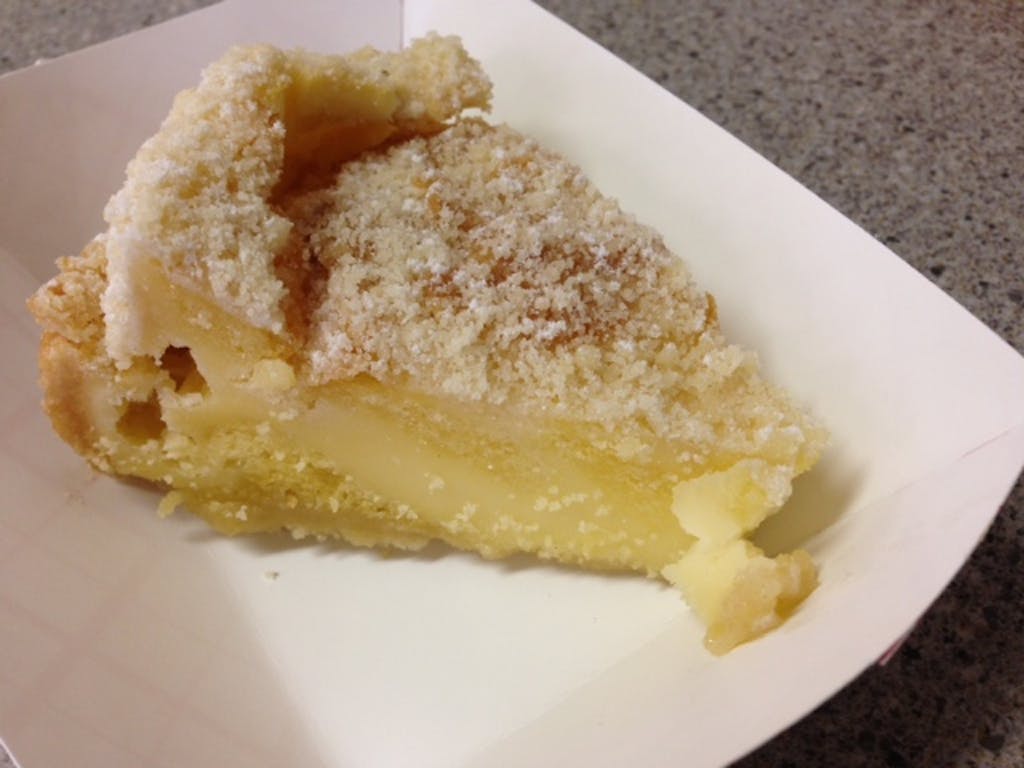 The dessert case shouldn’t be ignored either. You’ll always find the buttermilk pie that the Deens have become known for. Eddie’s son Brent Deen says he prefers the buttermilk fried pie, but I had my eye on a slice of lemon mascarpone cake. It sounds a bit fancy for a barbecue joint, but think of it as a cross between a lemon bar and a cheesecake. It was dense, sweet, and fantastic.

Smoked off site or not, the barbecue at Eddie Deen’s is good. It may have been an off day for the ribs and pulled pork, but the brisket, smoked chicken, and really everything else makes this joint worth the trip from Dallas.