FM Smoke House began with sous vide brisket and bacon grease injections. The owners of Holy Grail Pub in Plano had some success with inventive barbecue items at their weekend “Smoke Out” barbecue events, so they brought some of those ideas along when they branched out last year into Irving to serve barbecue.

A few months after opening, the gimmicks weren’t working. The brisket was dry and flavorless. The bacon grease had long seeped out and the tell-tale tenderness of sous vide was nowhere to be found, but the sides were good. After two visits with nearly the same results, I gave up on the possibility of good barbecue in Irving. Then, a few months ago, a friend suggested I give them another try.

I tucked into a pile of sliced brisket on a recent visit. The smoke came on strong, but the meat was juicy (even the lean slices) and the doneness was spot on. This was just some good, honest, simple barbecue. Pitmaster Rick Stewart explained that the sous vide and mixing of animal fluids had gone by the wayside (despite the claims on the outdated online menu). They made a choice to focus on a simpler version of barbecue, and it was working.

The pulled pork was also an improvement. Again, the good smoke came along with moist tendrils of pork. It could have used some more seasoning, but a dip in the mustard sauce, one of three available, remedied that. A house made sausage was heavily spiced and loosely packed. A limp and chewy casing was just in the way, but the filling was unique and showed an admirable level of effort. 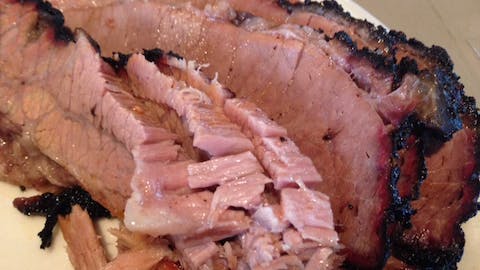 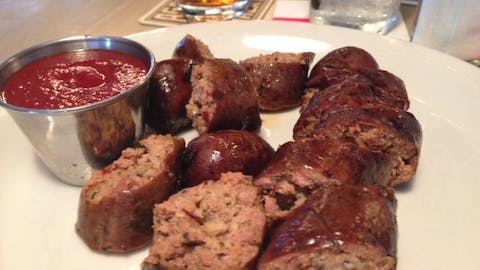 Some good barbecue and a great Texas beer list, along with a decadently rich mac & cheese (worth the $3 up charge) and fried okra that’s in the running for Dallas’s best had me planning a return visit.

A week later, some friends from New York had a long layover at DFW. I suggested we meet at FM Smoke House which is just ten minutes from the north gate of the airport. There’s plenty on the menu besides barbecue, so we ventured into the more inventive options.

A chicken fried smoked prime rib sounded like everything that’s right about Texas, and it looked like stunner on the table. Then we cut into it. Left with the smooth surface of sliced prime rib, the breading had nothing to cling to. It sloughed off the meat almost immediately. The beef beneath lacked seasoning and smoke, and relied heavily on the gravy for flavor. The excellent bacon mashed potatoes were almost enough to save it. 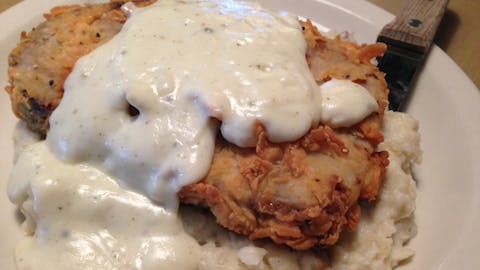 Another sure winner based on the description was the brisket stuffed chile relleno. Sadly, the breading was cold and chewy by the time it arrived. The filling of shredded brisket was too salty. We moved onto the smoked prime rib French dip which was the unanimous favorite. Juicy beef with grilled onions on a good roll with salty au jus is a recipe for success. A side of greasy, bitter brussels sprouts wasn’t a good complement. 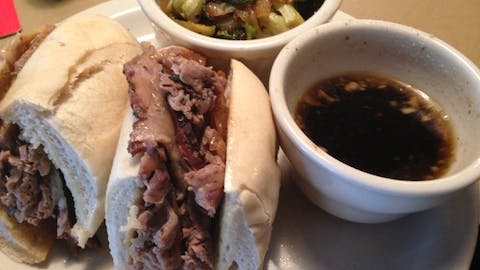 We had struck out on most of the fancy side of the menu, so on a final visit I got back to barbecue. You won’t find pork ribs as an option, but the giant beef rib was a potential stand-in if done well. A recent photo of a juicy smoked/grilled pork chop on their Facebook page helped me complete my order before I even arrived.

It was false advertising. The bone-in pork chop was as thick and dry as a brick. It must’ve been re-heated on the flat top instead of the grill. Other than a sweet and spicy syrup drizzled on the plate, there was no seasoning. I couldn’t get even a whiff of smoke from a bite off the fatty edge of the chop. 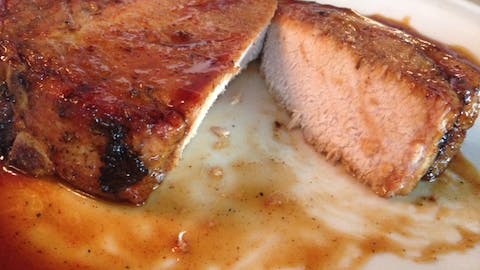 While the pork chop had everything cooked out of it, the beef rib was woefully undercooked. As my teeth came together for a bite, I could feel them breaking through each individual layer of unrendered fat. Barbecue sauce speckled onto the cut side of the rib like cake frosting didn’t help. This tomato-based sauce had been so reduced, it tasted like a tomato jam. 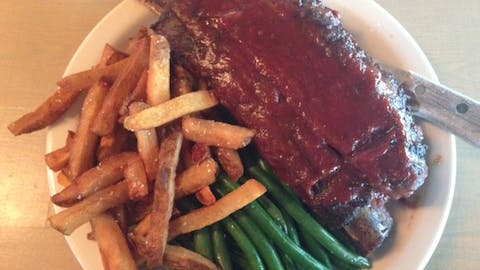 Thankfully, the okra was still great, and hearty fries were also good and crispy. Green beans were fresh if a bit crunchy. Almost as an afterthought, I got another serving of brisket (available in 1/2 lb increments) which was easily the best smoked meat on the table. Again, the meat was smoky, well seasoned, and moist. There was some fat left on every slice which melted readily on the tongue. This was some honestly good brisket. 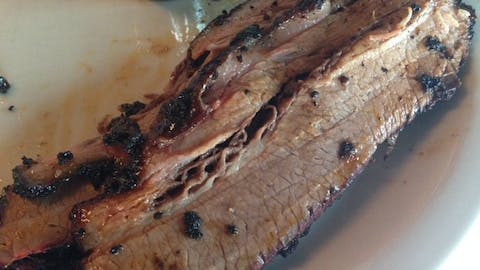 I left the table feeling like I’d just been a judge on Top Chef when an overachieving contestant finds the time to create an extra dish. That extra dish is always the one that seems to flop at the judge’s table, but still factors into the overall score. At FM Smoke House you’ll do better sticking with the first dish – barbecue. It is barbecue that prompted them to open in the first place, and it is barbecue that mostly hits the mark. The rest of the menu – the overachieving side – is still looking for the target.