Although he runs Franklin Barbecue out of Austin, Aaron Franklin is known worldwide for his barbecue. Franklin’s smoked meats are respected by his peers and revered by critics, and he has a James Beard Award to prove it. He has shared his knowledge through his show, BBQ With Franklin, and his best-selling book, but up until last week he’d never offered a hands-on cooking class. 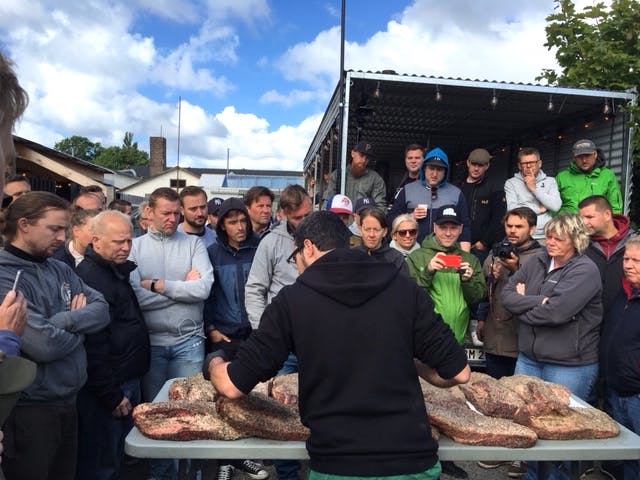 For his first-ever barbecue class, Franklin made the trek to Holy Smoke BBQ, just outside of Nyhamnsläge, Sweden. It’s a small joint in southwest Sweden—far closer to Denmark than Stockholm—with a Salt Lick road-trip destination feel to it. Johan Fritzell and Johan Åkerberg teamed up two years ago to open it, and they’ve been serving Texas-style beef ribs and brisket on the weekends ever since. They invited Franklin in to help spread the gospel of Texas barbecue, and to celebrate the new Swedish translation of Franklin’s book. Braun Hughes, Franklin’s kitchen manager and brisket whisperer (he hates the term “pitmaster”), came along to help cook the briskets. Stuart McSpadden joined us to photograph the event, and I was there to observe and sprinkle in some lessons on Texas barbecue history. A smoker built by Franklin was shipped over for the occasion. 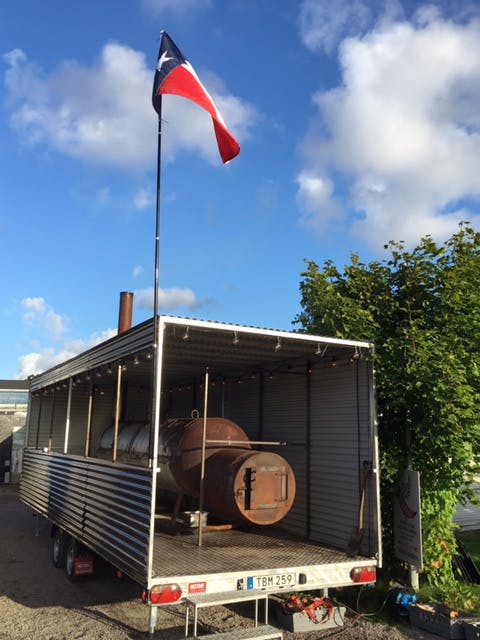 For two days, sixty students arrived at seven in the morning prepared to spend the next fourteen hours cooking, eating, and talking about barbecue. They came from Sweden, of course, but also from Hungary, England, and California. That’s a long way to travel for some brisket knowledge, but they wanted the hands-on experience with the brisket king. Most likely, they were hoping to unlock the secret of a Franklin brisket.

Franklin didn’t hold back on the details, but everything he shared probably left some students feeling intimidated. That’s because there is no single secret to get that signature brisket jiggle, or a special step that creates the glistening bark. The cooking process at Franklin Barbecue is not vastly different from their competition. The only secret is the rigidity with which they follow the steps in their method. It’s the only way to produce predictable results with such regularity. 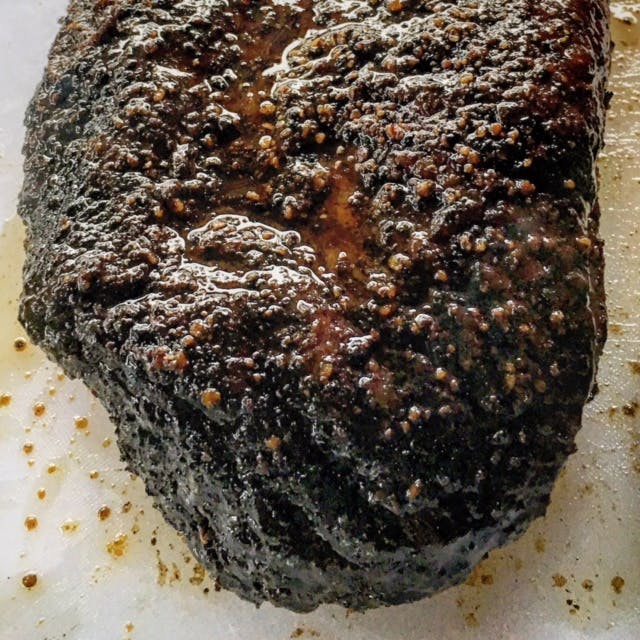 I followed along closely over both classes armed with the knowledge I’d taken from Franklin’s book. Although there wasn’t one secret to smoking the perfect brisket, these are six most important steps I gathered that will help you raise your brisket game:

Beef Selection: Beef in the U.S. is graded Select, Choice, and Prime, with Prime being the most marbled. You can make great barbecue from any grade, but starting with Prime means you’ll have the marbling required to keep the leaner flat side moist through the long cook. Franklin also stresses that beef free of growth hormones is preferable. Growth hormones promote the addition of lean muscle meat, but not marbling. He also believes the accelerated growth has an effect on the flavor of the fat. His preferred brand is Creekstone, but good luck finding their Prime briskets. Franklin buys most of them.

Trimming: A whole brisket is quite an investment. And in Sweden it’s even more expensive than in the U.S., so there were audible groans as Franklin aggressively trimmed the fat from the briskets. Each side was shaped by trimming, thin ends of the flat were removed, the fat cap was trimmed down to a quarter inch all around, and lots of hard white fat was taken away from the bottom of the point. That meant a lot of waste on the table, but it makes sense if you’re keeping Franklin’s intent in mind. He wants a brisket without any fins or bumps that’ll create a barrier to the breeze of smoke and heat created by the offset smokers. It’s also important to envision what you’ll want to actually eat off the brisket. If it looks like something you won’t want to bite into after it comes off the smoker—get rid of it. There’s no need to waste time and heat energy on large deposits of fat that will get trimmed off and thrown away after the cook. Trim it off before it’s seasoned and smoked. 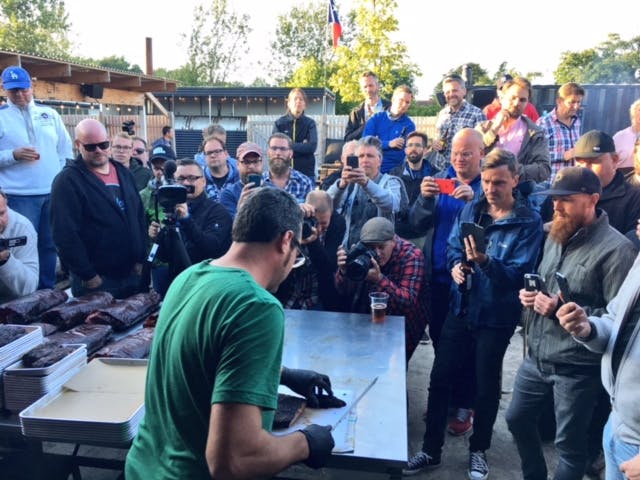 Fire Maintenance: The temperature of the smokers at Franklin Barbecue deviate by ten degrees at most, putting the entire cook within 265-275 degrees. It’s a lot to ask from a backyard cooker, but someone touches the fires in all five of their smokers at least once every fifteen minutes. To keep that constant temperature, they build a solid bed of wood coals in the bottom of the fire box, and use its thermal mass to hold the smoker temp while adding just a log or two at a time. The type of wood isn’t nearly as important as the moisture content. Dry wood burns immediately, while wetter wood smolders and boils off its water before fully igniting. A mix of both works well to help control your smoker’s heat curve, but dry wood is essential to provide predictable heat. Braun struggled with the dense, wet white oak on site the first day, and even baked out some of the moisture in the smoker once the brisket had come off. The drier wood he prepared did make for better briskets on day two of the class. 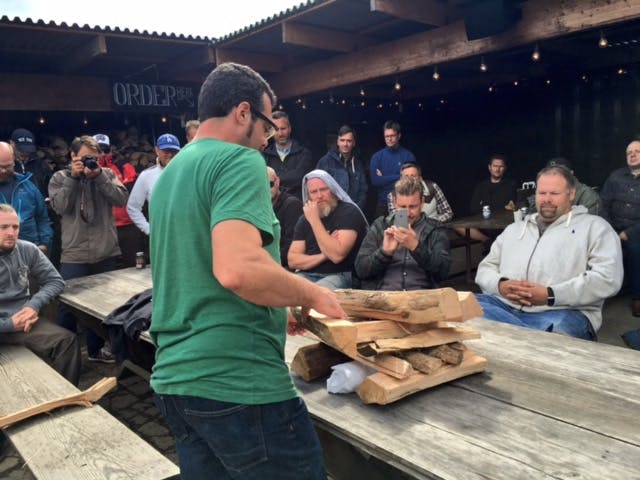 Doneness: Questions from the class were often variations of “How long do you smoke the meat?” Franklin shot these down over and over. Every brisket is different and requires individual evaluation. Rather than setting a timer, the best way to determine doneness is by pressing up into the bottom of the brisket instead of the fat cap. The fat cap will always be done before the meat. Checking the bottom of the flat toward the middle of the brisket lets you know when the whole piece is tender. Franklin encouraged the use of an instant-read thermometer to check the progress of the brisket, but warned that using any single internal temperature as a marker for doneness is dangerous. (Playing devil’s advocate, I reminded the crowd that his book says 203 degrees is a good compromise until you get used to checking it by feel.)

Resting: As I said, there isn’t a single secret to the Franklin brisket method, but from personal experience, this is the secret that is both the most important and most overlooked. The brisket isn’t done cooking when it comes off the smoker. Cutting into a hot brisket fresh off the smoker is the best way to ruin everything you’ve put into it up to this point. There will be some carry-over cooking, so use a thermometer to track it. If using a Cambro or an ice chest as a warmer, be sure to let the brisket rest before it goes in. The climbing temperature of a brisket that’s still in the midst of the carry-over cooking will accelerate when placed into an insulated box. That could lead to a brisket that turns into complete mush after a few hours. Instead, make sure the brisket temperature is headed down before placing into a warmer, and that it’s even lower for slicing. Franklin recommends an internal temperature of 137.5 degrees. I wasn’t sure if he was being sarcastic, but the point is to cool the brisket down. Steam released from cutting into a hot brisket is moisture that is lost forever, so a great slice of brisket will never be too hot to the touch. Plan the extended resting time into your cook. We’re not talking about fifteen minutes on the counter. On a hot day, it might take four hours for a brisket to ease down to the 140 degree range. The closer you get to the temp, the better the end product will be. 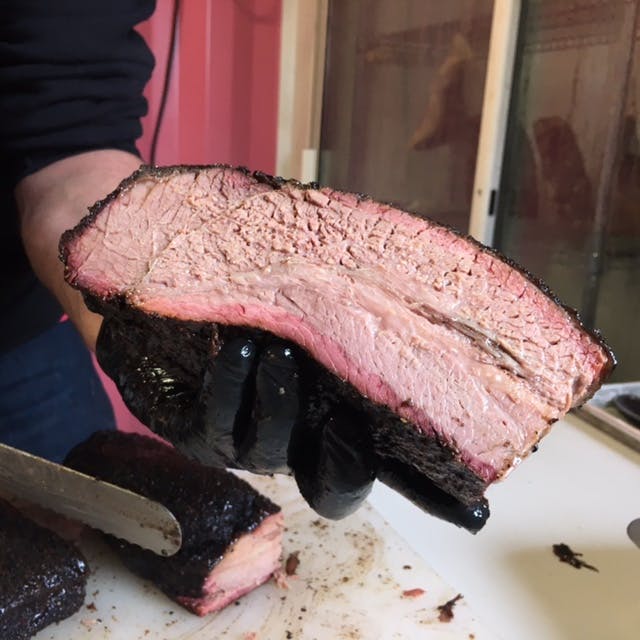 Slicing: There is an art to slicing a brisket if you want it to resemble one from Franklin Barbecue. As shown in the short clip below, the flat gets cut into pencil-thick slices against the grain. Once you reach the middle of the brisket, turn the point 90 degrees and slice in the opposite direction. Those slices are cutting against the grain of both the flat and the point, but perpendicular to neither. It makes for a full slice of juicy, fatty brisket with a piece of the tender flat.

When we arrived in Sweden, Franklin and Hughes were worried about cooking in the new environment. I ribbed them a bit, figuring that their concern was overblown. They had their usual Creekstone briskets and a smoker that they built. Surely it wouldn’t be hard for them to replicate their processes in Austin here in Sweden—but they were right. The temperature was cool, humid, and breezy. The wood was wetter and denser than they were used to. Even the bigger salt and pepper grain sizes affected the coverage of seasonings on the brisket. These were small differences, but they never dismiss the details at Franklin.

Hughes cooked three rounds of briskets, and I tried them all. The third batch was noticeably better than the first, and Hughes figured he’d have them nailed if given two more batches. He and Franklin knew they’d eventually get there, but also understood that adjustments would be needed along the way. All of the students should have left with the realization that the real key is repetition. Your tenth brisket will be better than your ninth. Or in the case of Hughes, who had 60,000 briskets under his belt when he took stock eighteen months ago, you know the next one won’t be as good as the last if you forget about the details. With a bag of dry wood, a Prime brisket, and a Thermapen, I feel ready to tackle the next cook.