It’s been a while since I’ve found an honest “sugar cookie” on my brisket, but as I waited for my order to be filled, owner and pitmaster Aaron Franklin handed me a preview morsel from the fatty end of the brisket and the flavor was transcendent. If I lived in Austin, I would come here every day if I could be guaranteed a bite like that one. 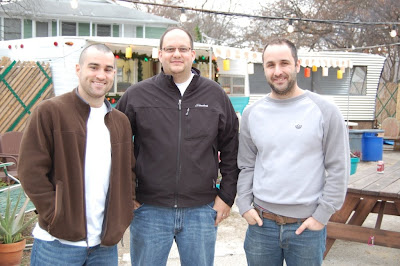 Drew and Brad, the boys over at Man Up Texas BBQ, met me in the cold weather to dine alfresco, but our hearts were soon warmed by some excellent smoked meat.

Brisket can be ordered fatty or lean, so we tried both. The fatty brisket had lots of beautifully rendered fat throughout the meat and nearly melted in the mouth. The smokiness along with the great flavor from the rub created nearly perfect slices—nearly perfect because the lean slices were the definition of perfection. Each slice had an great crust, a beautiful smokering, and a nice morsel of buttery fat clinging to the meat. 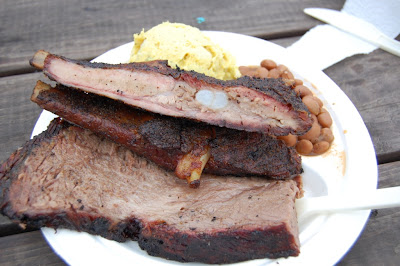 Heavy salt and black pepper covered the large spare ribs. Each rib had not a speck of unrendered fat, and the meat pulled from the bone with just a slight tug from the teeth. The texture of the meat was great, but it was bettered by the intense flavor. 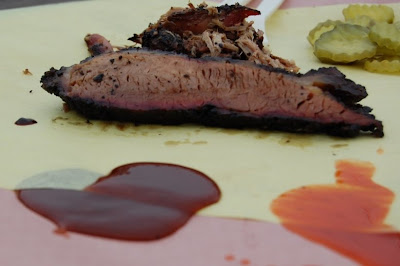 Side items included a good potato salad, very heavy on the mustard, and some fairly bland pintos. A bourbon-banana pudding put a fitting cap on the meal, as Aaron passed out large free samples to the group. Afterward, he showed us his pit enclosed in the sheet-metal shed. He brought the pit over from John Mueller’s old place on Manor Road, where he got his introduction into barbecue. 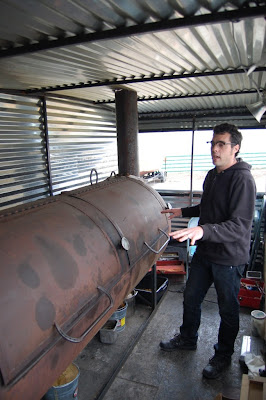 Aaron spent a few years perfecting his craft while smoking in the backyard until the crowds that gathered started to outgrow his space. At that point he knew it was the right time to open up a place of his own. Lucky for us.