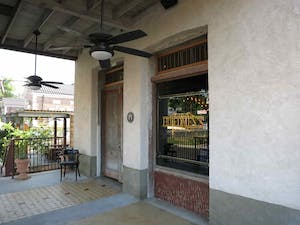 Evan LeRoy has come a long way from New York. He worked for a while at Hill Country Barbecue in Manhattan before making his way to Austin. That’s a long way to come so you can cook in the back of a bar, but it’s not any bar and it’s not just any kind of cooking. LeRoy is doing some honest barbecue in an old offset smoker out back of Freedmen’s bar. The building itself has a long history dating back to 1869 when it was built as a store by a former slave in the middle of a freedman’s community named Wheatville. It’s now right in the heart of Austin, but how does it hold up to the stout barbecue competition in the city?

Several weeks ago I went with a friend for my first visit so we could sample a good bit of the lengthy menu. There’s plenty that’s smoked and it’s not all meat. Smoked beets with chèvre may be more heart healthy, we were here for beef and pork. We started with the Holy Trinity Plate of brisket, ribs and sausage for $17. Any meat can be added for $5, so the pork belly came along for the ride. Seeing a few slices of both lean and fatty brisket on the tray showed me that somebody knew what they were doing back in the kitchen. I’d rather be able to pick my brisket portions straight from the carving table rather than have it delivered by a server, but this was a good sampling. The brisket was stunning. A flawless texture and well rendered fat throughout made for incredibly moist meat. The seasoning was heavy on the black pepper (good) and salt (not as good), but the smokiness was spot on.

Most all was well with the pork side of the tray as well. Thick slices of pork belly were silky tender, but the heavy rub could be a little less sweet and the smoke flavor could be more developed. The spare ribs had plenty of smoke. The black bark held juicy meat beneath. The bits came away from the bone nicely, but again, the rub was a bit heavy. Even given the small quibbles, I’d happily order either of them again. The made-in-house sausage was also very good. The links were juicy and well made with a great snappy casing. I expected a bit more flair in the seasoning given the rest of the menu, but it was more reserved. It’s still a solid link with plenty of peppery flavor.

The heft of the beef short rib was impressive. The common problem with these type of beef ribs is usually having the patience to get them done. In this case they had sat in the heat for too long, The meat was overcooked. It slumped off the bone, and the knife had shredded the edges as it was sliced. While the beef was mushy, the flavor from the smoke and the peppery rub was great. Even after all the meat we’d just ingested, we nearly polished off the beef rib. As I paid the bill I was already plotting my next visit.

Last week I was dining alone at the bar at Freedmen’s. A modest two meat plate was in order.  More of that brisket and some pulled pork came with a generous garnish of house made pickles. It would be hard to top the brisket from my earlier meal here, but this one was flawless. A thin bark crackled under my teeth as it gave way to a beautiful line of rendered fat. The bark and fat carried a smokiness that enveloped my entire palate. I say that any great brisket should exhibit a good level of moisture and tenderness and have a balance of smokiness, beefiness and seasoning. None of those three flavors should overpower. The brisket at Freedmen’s nailed all of those characteristics.

A vinegar sauce gave the pulled pork a decidedly Carolina flavor, but the bark was all Texas. It was pulled rather than shredded, and the moist meat was full of good smoke and rendered fat. A side of German potato salad, served in a jar, was at once dense and creamy. The vinegar kick was there, but there was a real depth of flavor from the bacon fat. If only there’d be more of this potato salad around the state and less from a delivery truck.

I didn’t want to waste a pile of food, but I really wanted to try the chopped beef sandwich. It was made with leftovers, but they had chopped together both beef rib meat and brisket. As my neighbor at the bar was perusing the menu I suggested we split the $5 sandwich and he’d get the rest of my two-meat platter. He agreed and soon I was tucking into one of the finest chopped beef sandwiches I’d ever eaten. Meat, sauce and bread were the only ingredients, but the sum of those parts was magical. My half was gone in three bites.

Of course dessert would be smoked too. I skipped the salted and smoked chocolate mousse and got the smoked banana pudding instead. A jar is layered with smoked banana slices, a custard and whipped cream. There are cookies in there for crunchiness too. I can’t say that the smoke flavor of the bananas was obvious, but the whole dessert was well executed. I now have a new member in the top five banana puddings that I’ve had the pleasure of finishing a meal with.

Next time it’ll be hard not to get the brisket, but I’ll have to save room to try another beef rib. Given everything else I’ve eaten there, it deserves another shot. Lucky for me, that means another meal at Freedmen’s where they’ve found a way to take a setting that diverts from the Austin norm of lunch-only and exterior seating to create a barbecue joint that on it’s way to being as good as any of them in town.