It was the end of a long day. My friends Nick and Clark had stayed with me bite for bite through six other barbecue joints and we were on our way to Houston to eat at this mightily heralded joint in northwest Houston that’s just over a year old. Greg Gatlin had his heyday on the gridiron as a defensive back for the Rice Owls, but barbecue is his game now. He was manning the counter inside the small dining room as I tried to order a small plate for my already satiated friends and I. I met some Houston friends there who had other ideas and we soon made our way to the covered picnic tables with a large foil tray brimming with all flavors of smoked meat. 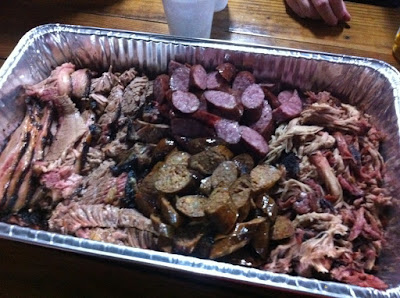 I started with the grayish hot links. These are house made without red dyes or nitrates, so they may not look like your idea of hot links, but they pack some heat. The casings are a bit chewy, but the meat and spices beneath are smoky and delicious. The regular sausage (made elsewhere) has a great snap and good black pepper flavor, but those hot links have superior flavor. Rosy pulled pork is flecked with black bits of highly seasoned crust. The texture is a good balance between toothsome and silky from the remaining fat.

All of the meats on the menu that I tried are excellent versions, but it’s the brisket that has me considering a road trip from Dallas to Houston fortnightly. The true connoisseur will always go for the fatty brisket, and it was well represented here. Thick slices were just on the edge of disintegration. They were barely held together with strands of well-cooked fat that had good smoke and great flavor from the subtle seasoning, but it was the lean brisket from the flat cut that stole the show for me. When it is done properly, a lean cut of brisket with a 1/4″ thick layer of fat remaining can be a thing of smoked wonder. I find that the fat locks in the smokiness greater than the meat, so a bit of each makes for a perfect bite of brisket. This fat was the epitome of what I like. It’s nearly clear and barely clinging to the meat. A pinch of the fingers goes clean through without a hint of resistance. The pencil-thick slices of meat were just hovering over the optimal tenderness as a few broke in half under their own weight, but it was far from mushy. A thick black crust enveloped the whole smoky slice and provided a slight crispness to the very edge. My brain overruled my bulging stomach as I continued to another slice.

Already well on our way to demolishing the meat pile, out came the large bowls of family-style side items. I have a dim recollection of any save the dirty rice, which was the best I’ve had anywhere. Almost as much meat as rice, this side could easily make a meal in itself. Prompted by my dining companions I mixed in a bit of sauce and took a great side to an even higher level. I’ll take this Gulf Coast flavor with my Texas style BBQ any day. 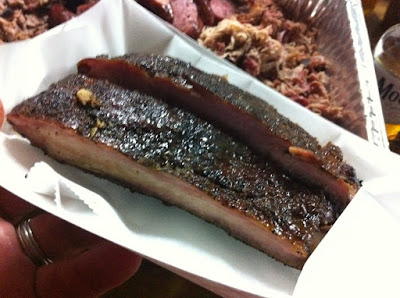 Being late in the day, I wasn’t surprised that the popular ribs were already gone. After a bit of begging from the table, a few of these beauties being held back (probably for the owner’s dinner) were released by the generous kitchen. The ribs were sweet, smoky, and magnificent with a sugary rub that didn’t overwhelm the well-formed crust. These perfectly tender ribs would have been a great way to cap off this excellent meal, but before I could ask, the peach cobbler arrived. Prior to this meal I could hardly imagine ingesting more than a few bites of anything, but the bottom of the peach cobbler bowl was clean before I left the table.

With the emergence of Virgie’s and the hopeful comeback of Pierson’s, Houston is quickly becoming a barbecue destination of its own. Let’s hope 2012 brings more quality urban BBQ to our fine state.