You’d think finding good barbecued goat in the Texas Hill Country wouldn’t be so difficult. This area has been the U.S. epicenter of sheep and goat ranching since the nineteenth century when wool and mohair (wool from goats) production took a foothold. Herds expanded greatly in the twentieth century, and while numbers have fallen in this century, Texas remains the largest wool-producing state in the country.

Despite the wealth of this livestock in the Hill Country region, there’s still some aversion to the idea of substituting goat meat as a main source of protein. (Texas Monthly‘s own Sonia Smith wrote about the potential of goat ranches gaining traction in an increasingly drought-stricken Texas last year.) But in some areas of the Hill Country, there’s respect and love for the other “other white meat,” as evidenced by two popular goat cook-offs: In April you can check out the State Championship BBQ & Goat Cook-off in Goldthwaite, and this past weekend I attended the World’s Championship Bar-B-Que Goat Cook-off in Brady.

First, let’s establish that goat is not always cabrito, no matter what the menu says. Cabrito is specifically a young goat that has only been milk fed (more here), and is more popular on menus in South Texas. In the Hill Country, you’ll likely be eating a mature, grass-fed animal. Instead of a seven- or eight-pound cabrito, this goat is from a twenty- or thirty-pound carcass. The meat is gamier, but it can be fantastic when cooked well, especially barbecued. So, why is it hard to find? One reason is that it’s so darn expensive.

Notoriously costly cabrito can run in the $10 per pound range for raw meat. Good goat, which is less coveted, is still about $8 per pound on the wholesale market. The barbecue joints that do carry it have to charge north of $20 per pound to make a profit. This knocks most places out of the goat game entirely. Customers conditioned to inexpensive barbecue balk at the high cost, and because many people are unfamiliar with the taste of the meat at all, they skip it altogether. If it doesn’t sell out, the owner is left with some very costly leftovers. Most don’t bother to risk it.

Shaun Geistweidt goes through a little more effort to get his goat cheaper. He’s the owner of The Spread Pit BBQ in Brady where goat is always on the menu (currently at $22.98 per pound), so he takes care of his own supply. To bypass the wholesale market, he buys the animals at auction and takes them to a local slaughterhouse to be processed.

The Spread cooks the meat over mesquite coals, a technique that did wonders on a goat leg that I ordered at dinner time. I opted not to have it dipped into the vat of lemon butter in the warming pit, wanting to get all the goat flavor. A peppery exterior gave way to juicy, tender meat. The meat was sweet and not too fatty, somewhere in between lamb and pork.

Down the street from the Spread is Mac’s Bar-B-Q. They sometimes offer goat as a special, and it was on the menu this weekend in honor of the goat cook-off. A goat dinner with a half pound of meat and two sides was $20. They indirectly smoke it and pull the meat for service. The moist meat was good and smoky, but it needed a bit more cooking time to knock the chewiness out of it.

Just thirty miles south of Brady is the original Cooper’s BBQ in Mason (more on the Cooper’s BBQ family). Dual pits out front were smoking furiously trying to get the pork chops done, but I had my pick of goat cuts. A half rack of ribs were meaty with a salty, crispy crust. I ate every bite of the tender meat, but it’ll cost you. Goat is $25.99 per pound, which is why I’d stay away from a cut like the backstrap where the meat will be tender, but you’ll be paying for a whole lot of spine. If that’s too rich for you, then go for the goat sausage at $17.99 per pound. It’s made locally from a mix of goat and pork, then cooked over the mesquite coals. It’s one of the more unique sausages I’ve tried, and it tastes great too.

Because of it’s high cost, Hill Country pitmasters don’t put a whole lot of goat on the pits. You’ve got to arrive early if you want a taste. At Cooper’s in Llano there were just two servings remaining at 11:30 on a Sunday. I took one which was a goat shoulder ($21.49 per pound). A salty rub had enough pepper to provide some heat on the nicely burnished crust. The meat was incredibly juicy and tender, and was one of the better bites of goat I’ve had, which is saying something since I had just sampled from forty different goat entries at the cook-off in Brady the day prior.

But that’s not to diminish what I tasted at the the World’s Championship Bar-B-Que Goat Cook-off. The event, now in its forty-first year, drew 206 teams that entered their version of smoked goat. Along with about forty other people, I judged the competition. A goat horn hanging around my neck marked me as a rookie, while some of the judges had been a part of the competition since the very beginning. 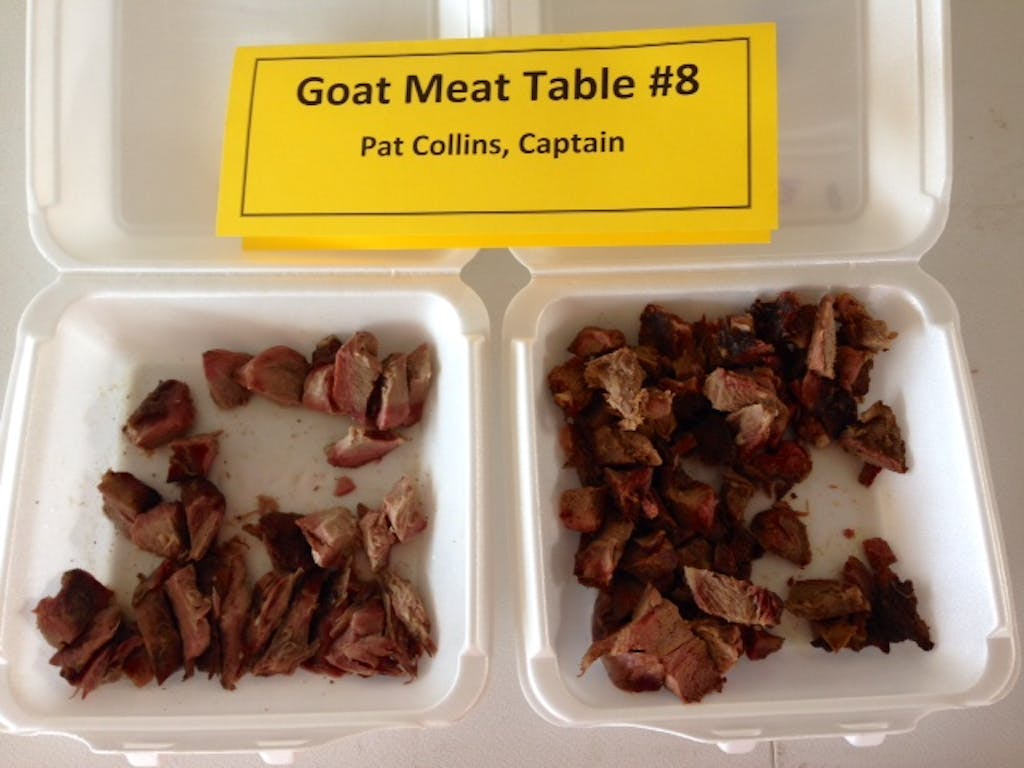 A sea of Styrofoam boxes were layed out on eight tables. Each box was filled with pulled, chunked, or sliced goat meat and nothing else. Each table was assigned five judges, with the idea of eliminating five entries from every table based on our accumulated score. The next table we moved on to had fewer and fewer entries remaining until in the whole room we got down to just sixteen that went to the final table. There, the most seasoned and revered judges would determine the spots one through ten. 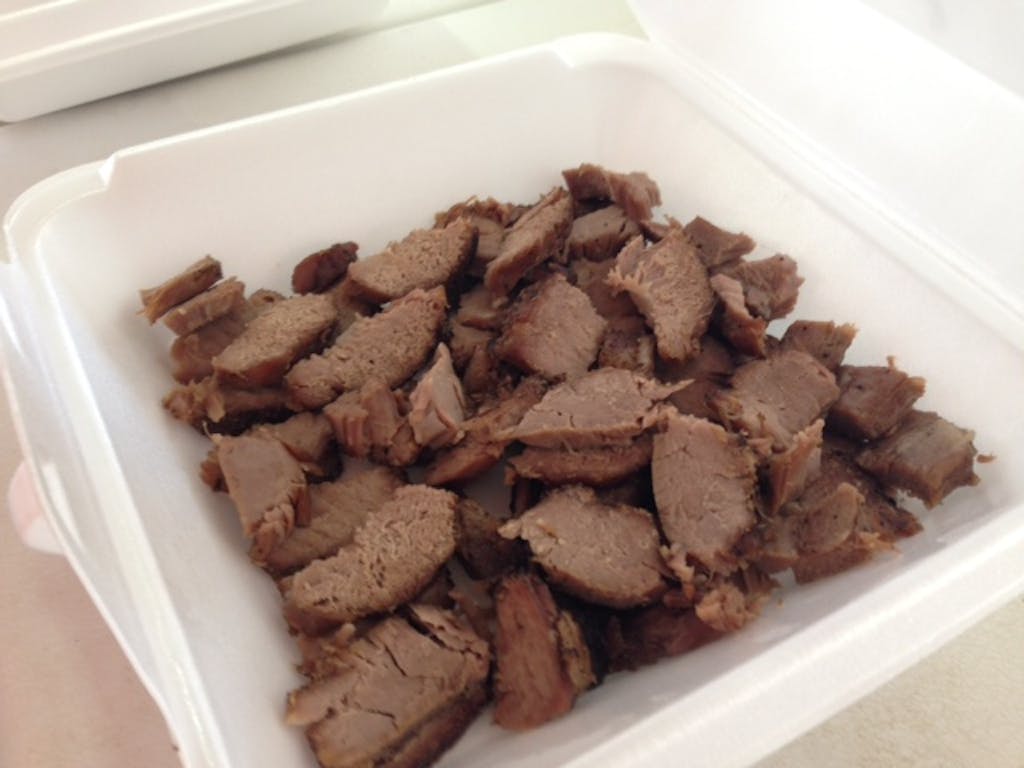 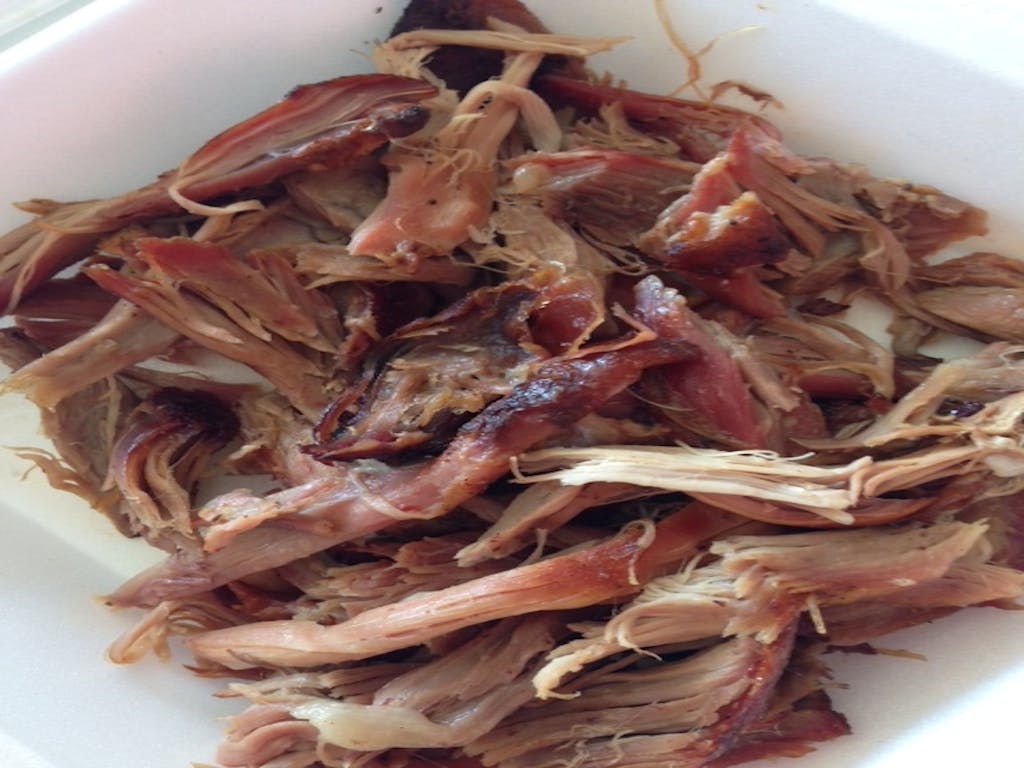 Unlike the restaurants I previously mentioned, which cook over direct heat, most of the rigs at the cook-off are steel offset smokers. It was the seasonings and varying levels of skill that made for variation. The starting point for every team is similar. The day before the event, they are given a frozen half carcass of a Spanish/Boer cross goat. The half weighs in at about seventeen pounds according to competition organizer Skye Smith. “They get the shoulder, withers, ribs, and ham to cook,” she told me.

If you’re not judging there’s still a way to sample the goat. For $12 a plate you can line up to get a full goat meal starting at 11:00. It was a popular option, and was sold out in just two hours.

Back in the judging pavilion, seasoned judge Kim King guided us through the process, and hinted to the rookies what characteristics we should be looking for. Thankfully, most of the entries were pretty good. Very few required use of the nearby trash cans (though a couple had an unfortunate taste of lighter fluid). The most revered entries were smoky and not too saucy or salty.

In the end, the hometown advantage was evident. Eight of the top ten teams hailed from Brady, including the Lonesome Dove Saloon Cooking Team, led by local boy Ronnie Aston. After the top contestants were named, the announcer said proudly, “We know how to cook goat in these parts.” No arguments there. Now let’s hope we can find it on more menus soon.