Rose Diamond once ruled the world of smoked turkey. In 1938, customers in New York, Miami, and Hollywood enjoyed her smoked turkeys shipped out from her Fort Worth home. According to The Claude News, they brined for at least ten days before being smoked in a brick pit in Diamond’s backyard for the better part of a day. “Properly smoked turkey is a rare delicacy,” the paper reminded its readers. By the next year, the Fort Worth Star-Telegram declared, “Smoked turkey is the rage of the moment.” Maybe Mrs. Diamond was sold out in 1939, but something prompted a hungry soul in Dallas to request a special delivery of smoked turkeys from Tyler instead of Fort Worth, and thus began a smoked turkey dynasty.

“A gentleman in Dallas called and said he needed six turkeys,” Sam Greenberg, third-generation owner of Greenberg Smoked Turkeys in Tyler told me as we spoke between bites of Frito pie at Stanley’s Famous Pit Bar-B-Q. His father, Zelick Greenberg, brought the finished turkeys into town to a candy shop, where they were packed in straw-lines boxes and then transported to a Dallas-bound train. “That’s when he said he got into the mail order business,” Greenberg said, sounding as if this wasn’t the first time he’d told this story.

The family-owned smoked turkey business was started by Greenberg’s grandfather, also named Sam, who came to Tyler in 1903 from Poland. He brought with him a recipe for smoked bird from his mother, and the skills of a shochet, a Jew certified to slaughter animals according to Kosher requirements. Once he built a smokehouse at his dairy operation outside of town, members of the Jewish community who brought him animals to slaughter started asking him to smoke them too.

Greenberg told me the original smokehouse was a small metal building with wagon wheels mounted on the ceiling. Ducks, chickens, and turkeys would dangle on hooks connected to the wheels. Like many early Texas barbecue joints, the smoked meat was the side business of the farm. The elder Sam also ran a blacksmith shop on the square in Tyler. But once the shipping began in 1939, Sam and Zelick built five more smokehouses to keep up with the growing demand. Just a few years later, sometime in the early 1940s, it was all taken by a Christmas Eve fire. 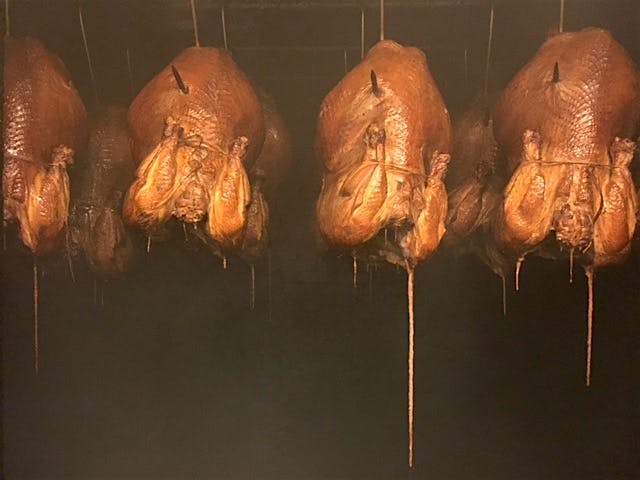 The flames from real hickory logs mixed with the dripping fat of smoking birds can have that effect. It’s why most commercial smokehouses use highly technological ovens with temperature and humidity control. Racks of meat are wheeled in, buttons are pushed, vats of sawdust sprinkle their contents onto electric hot plates to create wisps of smoke. And that’s the process I expected to find at the Greenberg plant. I followed Greenberg in his Lexus (just look for the GIBLET license plate), but when we pulled inside the gate there were neat stacks of split hickory wood.

Smoke billowed out from under a partially opened garage door. Inside, the air was so thick with smoke I thought for a second we were within some sort of large horizontal chimney. It was the pit room. Pitmaster Ray Wallace has overseen the operations of this room for thirty-five years. We spoke briefly because his every utterance unleashed a series of coughs. He wore knee-high boots, leather gloves, and safety glasses for protection, but he would be well-served by a respirator. A hairnet over his baseball cap seemed like comical overkill in this room full of nothing but wood, smoke, fire, and sparks. 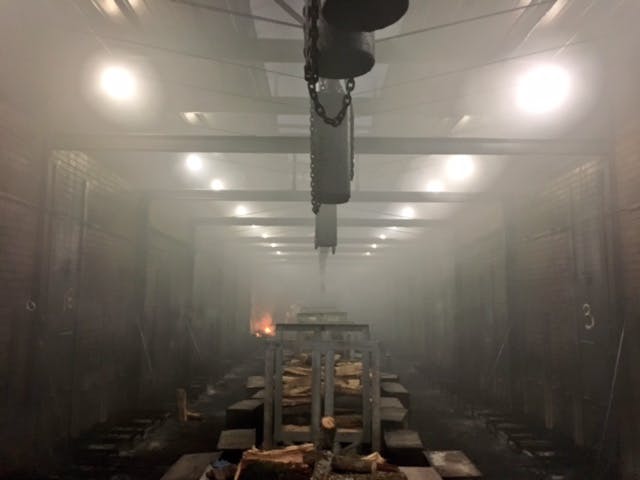 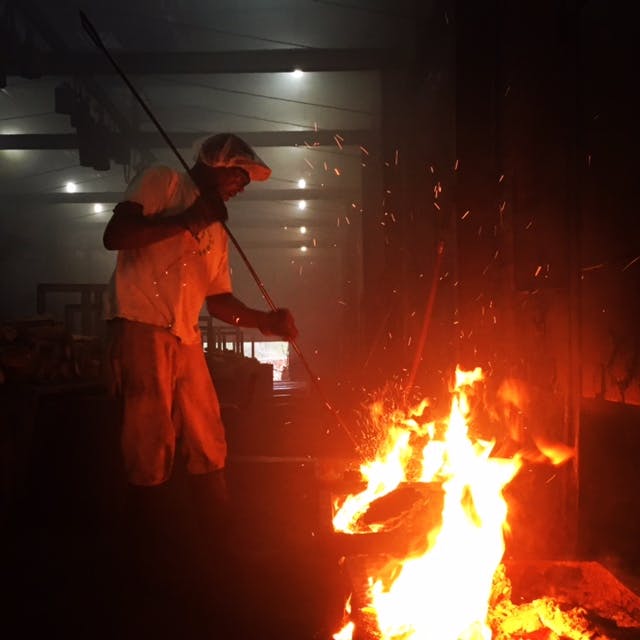 There’s no access to the turkeys from this room. They fill the twenty separate smoking chambers flanking the pit room on the other side of each wall. Wallace can only tend to the fires that fuel each chamber. He slides metal plates up to their open position as corresponding counterweights lower on the other side of the pulley system. Behind the doors are metal drawers full of fire. He slides them out with a long metal rod along a track built into the floor. They look like iron milk crates. Wallace sprays each one with a water hose, turning the red hot coals to a dull gray, and rendering fire into thick smoke. They want these birds to cook long and slow, up to 24 hours, and you can’t do that with a raging fire, but the goal is to maximize the smoke. Wallace jams a fresh cut log on top of each tamed mound of coals, and slides the fire drawer back into place. Each smoking chamber has three drawers. After he gets through all sixty, it’s time to start back at the beginning. 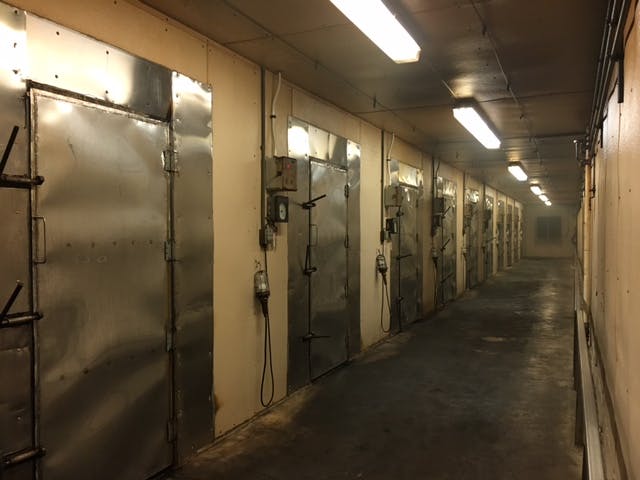 It’s not easy to find this kind of skilled labor, especially for seasonal work. Sam the elder relied on Elva Cole, a cook who he hired to man the Greenberg smokehouse in the early days. “Elva had nine children, and I think at one time all of them have worked for us,” Greenberg joked. In fact, the foreman of the smoked turkey operation today is Elva Cole Jr. “He’s the man who determines if your turkey is done right,” Greenberg assured me. 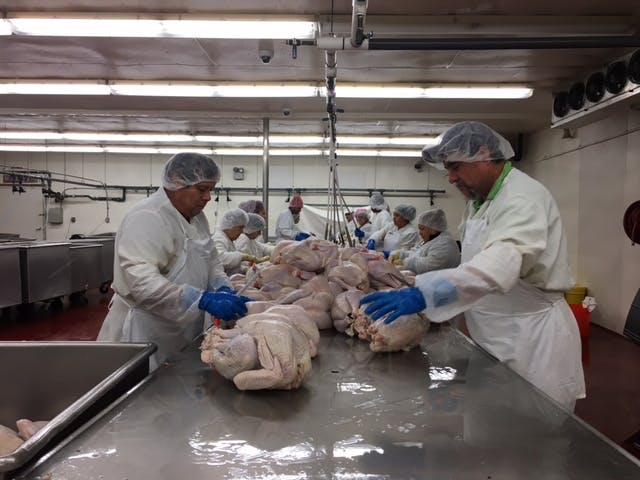 “Done right” means that each employee would be proud to serve the turkey on their holiday table.  Turkeys come fresh into the plant daily. The wings and any excess fat is removed, and they’re seasoned with a proprietary spice mixture that’s heavy on black pepper. Slits are made into the meat to get the seasoning deep into the bird, the exterior is covered, then it sits overnight before being hung in the smokehouse. There’s no brining or wet curing. They finish at half the weight of the raw turkey. It’s a double whammy due to the 12 percent spike in turkey costs this year, but Greenberg didn’t raise their prices to compensate. Greenberg still demands no blemishes on the smoked skin, which he describes as “majestic mahogany” in color. 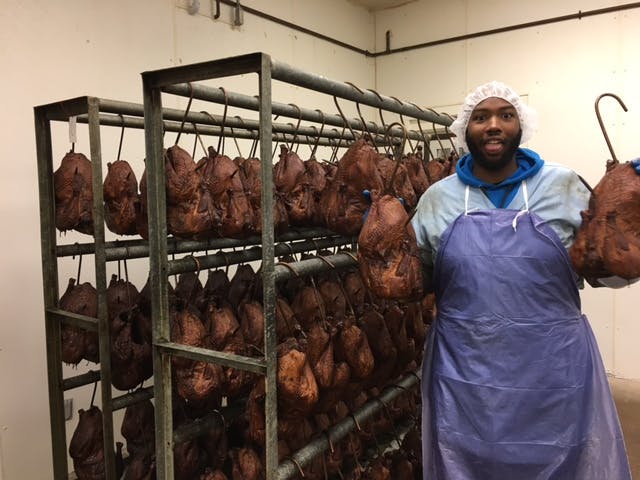 It’s a great looking bird, with a heavy smoke aroma. “I will apologize for any complaint unless you say that it’s too smoky,” Greenberg tells me. “It says it right on the package.” I’ve always eaten my Greenberg turkeys at room temperature on a sandwich with mayo, mustard, and horseradish, but I asked Greenberg how he ate his. “I slice it cold and smear on a little mayonnaise.” He has no need for bread, cheese, or other accompaniments except “cold beer and Fritos.”

Greenberg does everything he can to bring back crew members like Cole and Wallace every year. There are fourteen year-round employees at Greenberg, and 180 at the peak of the holiday season. The season for Greenberg begins on October 1, and slowly ramps up. By mid-October, they’re smoking at full capacity, and by Thanksgiving this year, they had smoked, packaged, and sold 80,000 turkeys. Another 130,000 are expected to go out the door before they close the doors for the year on Christmas Eve. 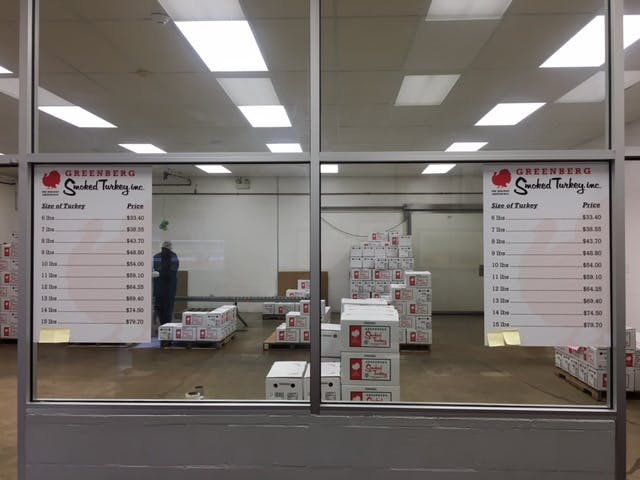 A crew of forty employees monitor orders as they come in from the website, by phone, and even by fax machine. (Greenberg says the fax may be phased out from the command center next year as they embrace other technology available to them.) It’s been less than a decade since they’ve started accepting credit cards. Before then, turkeys were delivered on the honor system with an enclosed invoice. Nowadays they’re carried at Central Market stores, a single Brookshire Brothers location in Tyler, and, of course, at the retail counter inside the Greenberg facility. Customers can order from GobbleGobble.com (a web address secured by Greenberg’s genius nephew), but Greenberg said that’s the only side of the business where they rely on anything high-tech. The smoking will always be handled with tradition in mind. “I do everything just like my grandfather and my father did it,” Greenberg promised more than once during our conversation. He won’t even change the box design. 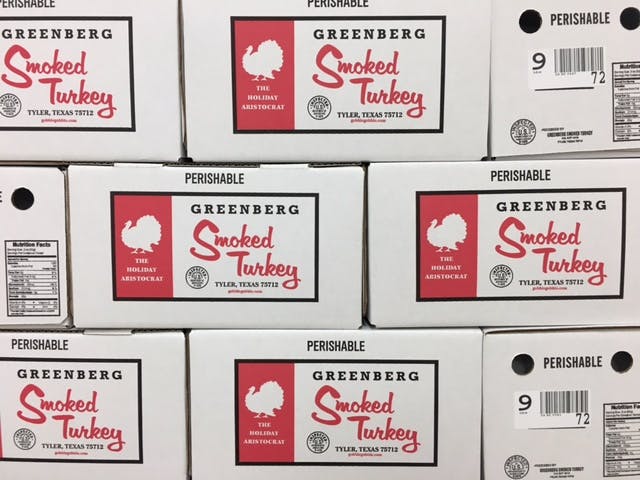 A red turkey silhouette is the only sign outside the Greenberg facility, because the local tradition is so important they don’t even need the name on the building that stands where the old Greenberg dairy once was. That fire seventy-some-odd years ago would have been enough to drive most out of the smoked turkey business, but Greenberg told me the business was lucky enough to have great employees who literally saved the invoices from the burning barn so the the family could at least ensure payment for the turkeys they’d already delivered. It was certainly a tough Christmas for them that year, and they could have gone the way of Rose Diamond in the annals of smoked turkey lore. Instead, they rebuilt and stuck with the traditional smoking method that had first grabbed the attention of that mystery customer in Dallas in 1939. That’s why we can all enjoy “The Holiday Aristocrat” on our table this season.