The Food Market on the historic square of Gonzales is part BBQ joint and part convenience store. Pass through the glass door and you’ll hear a hum of activity as you walk toward the large glass-faced cases that display the plethora of smoked meats available. Behind the counter to take your order will most likely be Richard Lopez, the third-generation owner. (A great oral history of the joint from Mr. Lopez himself can be found here.) This joint was our eighth stop of the day, so we were doing well to fit any more meat in our stomachs. I’d heard from so many sources that this joint was good, but it’s never made it into the heralded Texas Monthly Top 50, so I was skeptical. 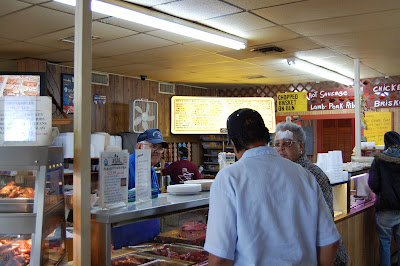 I swore to my companions that I would order the minimum required to get a taste, but the prominently displayed meats and the delightful aromas changed all that. I ordered a plate of sliced brisket, spare ribs, and sausage. I finally got to snap a shot of the brisket after we’d polished off most of the other meat…it was that good. 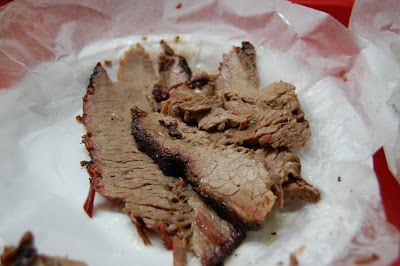 A crispy, almost candy crust coated the brisket. The texture was as if the meat had dried out, but these slices were perfectly moist and tender with perfectly rendered fat. The crust’s flavor was also smoky, as was each slice from top to bottom. We later learned from a clipping on the wall that the crust was formed by smoking the briskets in a pan that captures the rendered fat and juices. The brisket is then seared in this pan during the cooking process to get that wonderful crust. The ribs were equally as good, if not as complex. There was little rub, but the wonderfully smoky flavor ran through the moist, if not incredibly tender meat. Each bite just made me want another despite the lack of gastric real estate. The sausage was run-down-your-chin juicy (fatty) with lingering heat not reminiscent of anything else in the area. The meat had a fine grind, and the casings had good snap. Of the joints tried on this day, Gonzales Food Market was the only place that nailed every meat. This joint should be considered a must try for anyone traveling the Central Texas BBQ trail, and how it has never cracked the Top 50, I can’t begin to know.