As you head northwest toward Lubbock out of the small town of Post, the steep road seems to point skyward. Cresting the edge of the Caprock Escarpment, U.S. 84 cuts through the relentlessly flat carpet of prairie atop the Llano Estacado, or Staked Plains. Charles Goodnight, the famous Panhandle cattle rancher, told his biographer that “there is nothing to create an echo” in this land. It’s easier to spot a grain elevator or windmill than a tree interrupting the horizon, so it’s no wonder this region has never had a reputation for really good barbecue. But that’s changed over the past decade.

In 2013 Tyler’s Barbeque was the lone Panhandle representative on Texas Monthly’s top fifty list. It now has some company: Evie Mae’s Barbeque, just outside Lubbock (not technically in the Panhandle but close enough), not only made the list in 2017, it cracked the top ten, at number nine. In the two years since, others have followed their example, transforming this patch of Texas into a veritable barbecue destination as more pitmasters ship in the wood needed to satisfy a growing demand for the quality of smoked meat found elsewhere in the state. As I toured the massive Llano Estacado over the winter, I found a lot of great barbecue as well as a community of pitmasters rooting for one another’s success.  For the March issue, I highlighted six spots, by category. Below, I’ve added some honorable mentions as well.

When Tyler Frazer opened this joint, in 2010, Amarillo barbecue was mostly served chopped on sandwiches. He brought smoky sliced brisket to the table, using mesquite wood. Once popular in this part of the state, mesquite imparts a heavier smoke than the oak most of the area upstarts now use. Frazer tames it well, putting out some of the best pork ribs around. His place draws a crowd whenever it’s open, but many hold off until Thursday, when they can get his signature green-chile macaroni and cheese.

Evie Mae’s is more than a barbecue joint. This complex includes a bakery (which alone is worth a visit for its coconut cream pie and Texas sheet cake) and a welding shop that builds barbecue pits and wood-fired grills for home and commercial use. Owners Arnis and Mallory Robbins probably couldn’t have predicted their current success four years ago, when they were slinging barbecue from a food truck parked in front of a storage unit. Customers trickled in at first, but word spread about their buttery, tender brisket and spicy, juicy links of green-chile sausage. Starting small and building from there turned Evie Mae’s into an example for barbecue entrepreneurs in the area. Lines can stretch around the restaurant on Saturdays.

“True Texas Grit” was the motto on the sign at Embers Barbecue when I visited in November. Andrew and Jewel Hill were barely hanging on to their barbecue dream in Level-land. They’d put a lot of sweat into building out a restaurant and turning an old steel tank, which Andrew and his dad had salvaged from his grandfather’s property, into a barbecue pit. But no one was showing up for their soulful offerings, including a hearty brisket stew and conchitas (“little shells”), a pasta dish similar to fideo, with chopped brisket. So at the end of 2018, they closed up shop, put the smoker on a trailer, and moved thirty minutes east to the much larger city of Lubbock. In January, they started serving barbecue on just Thursdays for now. With any luck, they’ll continue to make their green-chile-and-cheese sausage. Like most joints around here, Embers favors the green chiles of nearby New Mexico over the jalapeños favored in much of the rest of Texas.

The five-hundred-gallon smoker behind Rejino Barbeque is almost as big as the trailer that Aaron and Christina Rejino serve out of, which would lead one to expect similarly large crowds. But the Rejino flag fluttering along the sidewalk in downtown Olton (population 2,112) was the only movement on the street when I stopped in on a Saturday in November. The Rejinos promised it was busier on weekdays, when the townsfolk weren’t spending their leisure time in nearby Plainview. Sitting inside the adjacent greenhouse that serves as their dining room during the winter, I marveled over the smoky brisket, homey green-chile creamed corn, and bacon-wrapped stuffed jalapeños and hoped they’d find enough business to ensure I’d be able to make a return trip. I needn’t have worried. According to the couple, in recent weeks they’ve been selling out of barbecue earlier than they’d like and have added a second smoker.

On Wednesdays, Isaac Arellano steps away from his day job repairing cars to fire up the barbecue pit. Luckily, he doesn’t have to take too many steps; Pitforks and Smokerings operates out of the garage where he works. His dad, Cruz, bought the place before Isaac was born, so Isaac has spent more time inside this shop than he can remember. Spending a few more hours here to get the briskets just right doesn’t seem like a leap at all. The place serves customers Thursday through Saturday, starting at 11:30 a.m. I was amazed at the refinement of each item on the menu. Perfectly plump sausages, tender brisket, and expertly smoked turkey breast didn’t taste like the work of a barbecue part-timer. It helps that Arellano cooked brisket once a week for six months in preparation for opening the place. He didn’t log the same practice hours with his ribs, but they’re masterful, with the right touch of chile powder. Arellano’s attitude toward other pitmasters in the area is refreshing. When wood suppliers in Lubbock ran out of oak recently, he made the three-hour round-trip to Nazareth to meet a shipment there for Oklahoma oak and brought back some for himself and Embers Barbecue.

If you drive west out of Farwell, you’ll be in New Mexico before you can blink. Housed in a metal building at the edge of Texas, the BBQ Shop sells great barbecue out of two massive Oyler smokers on Thursdays. On Fridays and Saturdays, the BBQ Shop goes mobile, serving the town of Clovis, New Mexico, out of a food truck. Either location requires quite a haul from most of Texas, with much of the drive within sniffing distance of some of the largest cattle feedlots in the country. Kelly and Judy Mimms opened the place in 2010. Judy died in 2017, and Kelly passed the BBQ Shop on to his son and daughter-in-law, Steve and Rita Perry, later that year. Steve smokes with oak and serves the favorites, like juicy pork ribs, as well as brisket, turkey, sausage, pulled pork , and his famous pig candy, which is best described as bacon jerky in a candy coating. You’ll want a few strips for the road. They made the view on my long drive home even better.

So Snyder is just south of the Llano Estacado, but Blackland Smokehouse is too good not to mention. The original location in Roscoe is run by Cole Fullwood. His wife, Amanda, moved north to Snyder in late 2017 to open up this outpost. The massive spare ribs are excellent, and be sure to get their early enough for the red potatoes and the green chile mac & cheese.

Dyer’s is best known for their ribs and rings. The crisp onion rings use a tempura-like batter that’s popular across the Panhandle. They go best with a plate of pork ribs, crunchy coleslaw, and a slice of buttered Texas toast.

Sausage is the specialty of the house, and it comes in many varieties. A $5 sausage wrap, with a generous link of sausage—I like the jalapeño version—rolled in a flour tortilla, is a good way to sample it.

This tiny joint on Stratford’s Main Street is just twelve miles south of the Oklahoma Panhandle. If you’re going that far for barbecue, make sure not to show up on a Friday, when the menu is all burgers. On any other day, try the pulled pork Frito pie.

This reliable spot for the barbecue basics has started its fifth year in business. The sides are made fresh every day, so be sure to try the slaw and potato salad. I also liked the sweet and tender pork ribs as well as the juicy pulled pork.

Mike Havens opened in a new location after a fire in 2016, but the menu still brings the heat. There’s green chile sausage, a special of green chile stew, and you can add chopped green chiles onto just about anything for three quarters. I like them on a sandwich called the Taos, which pairs green chiles with chopped beef or pulled pork.

I don’t come here for the barbecue plates. The unique chunked brisket is fine, but the perfect onion rings are the prize. Get them alongside a pork sandwich, or just take a large order to go and eat them straight out of the bag.

Open since 1952, this might be the oldest operating barbecue joint in the region. Inside the tiny restaurant, it’s all about the sandwiches, which can be dressed up to your heart’s content from a generous condiment bar before you take a seat in one of the old school desks.

Folks line up outside this popular food truck three nights a week for massive portions of competition-style barbecue at great prices. Owner and pitmaster Lance Moore parks in Plainview on Tuesday and Wednesday evenings; he’s at Floydada on Thursdays starting at 6 p.m. Try the tender brisket, and look out for the green chile mac & cheese.

This beloved barbecue joint, serving takeout barbecue only, is no-frills. They only smoke brisket flats, so there’s no fatty brisket to be had. The smoked sausages are the size of summer sausage, and the ribs are juicy.

This article originally appeared in the March 2019 issue of Texas Monthly with the headline “Finding Great Barbecue On the Staked Plains.” Subscribe today. 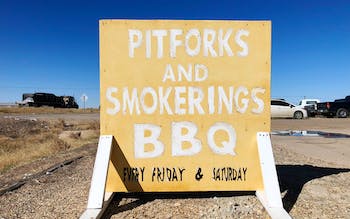 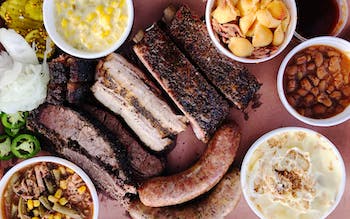 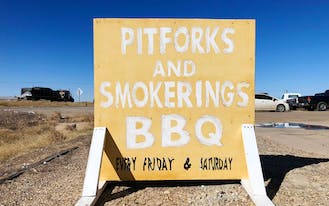 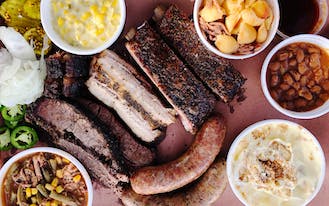 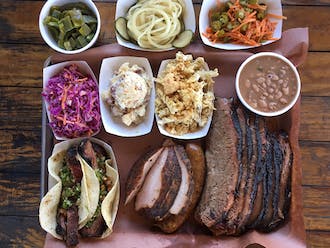 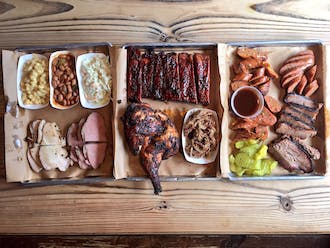