Update: Roadrunner Smokehouse has closed. Owner Elizabeth Hammond sold it to her father Tom Hammond, and it has since reopened as AJ’s Original Barbecue.

The Hammond family has been a barbecue fixture in Glen Rose for fifty years. If you’ve been to Hammond’s BBQ along Highway 67, then you probably already know this, but it’s no longer run by anyone named Hammond. Neither is Loco Coyote Grill, A J Hammond’s original barbecue joint outside of town on Country Road 1004, which was sold by the family in 2013. It’s the newest joint in town, Roadrunner Smokehouse, where A J’s son Tom Hammond decided to make his return to the barbecue business earlier this year, along with his wife Linda, and children Elizabeth and Aaron. Confused yet?

In 1985, Tom Hammond opened the second of his family’s restaurants at the current site of Hammond’s BBQ. There was a fire in 1996. After the building was repaired it was sold the following year. It burned to the ground five months later. After another rebuilding, the business was ultimately sold to Larry and Judy Higgins, and they still run it today. I hadn’t been to Hammond’s in several years, so I headed down to Glen Rose to try it head-to-head against the much newer Roadrunner Smokehouse. (I wrote about Loco Coyote Grill last year.) 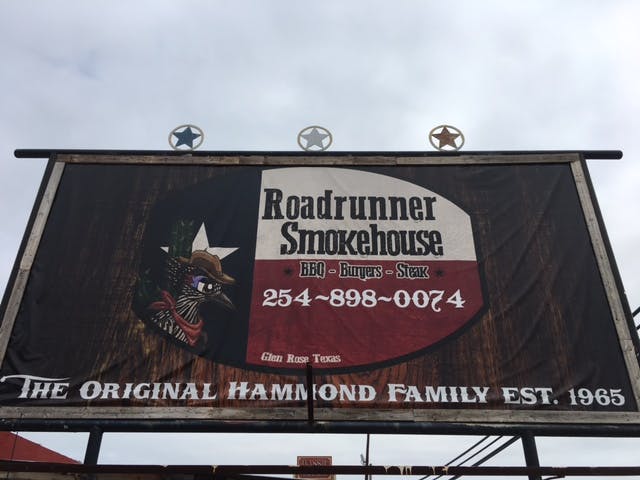 The wood-fired smoker behind Roadrunner Smokehouse had three doors, each painted with Shadrach, Meshach, and Abednego (the three Jewish men saved by God from Nebuchadnezzar’s furnace). I was hoping for the best as I sat at one of the many picnic tables that look out onto Highway 67. Tempting the same fiery fate that brought Hammond’s down in flames two decades ago, the floor is covered in sawdust, just as it is at Loco Coyote.

Thankfully, onion rings are included as a side option for the meat platter. The freshly-fried rings were the standout of the visit that included a decent sausage, dry brisket, day-old spare ribs, and turkey that you could replicate at home by going straight from the deli counter to the frying pan.

A mile up the road at Hammond’s, the dining room was still full at 1:00. It was busier than Roadrunner, but things weren’t much better in the brisket department. Ultra-lean brisket devoid of bark, fat, and flavor was sliced thin. A good dousing of sauce helped, but this was sandwich-grade brisket only.

The smoked turkey at Hammond’s was a step up, if a bit too salty, but the frozen onion rings were a disappointment. In the fried food game, there’s no side item with a bigger gap in quality than freshly battered onion rings versus the sad, pre-frozen ones. I did enjoy the pinto beans.

The only bite of barbecue between the two restaurants that was truly remarkable was from the spare ribs at Hammond’s. The black bark studded with black pepper hung onto the smoke. Each tender bite was a blast of salt, pepper, and sweetness from a finishing glaze. The meat came away from the bone easily, and in the end I was sad to only have two of them. I was also a bit crestfallen when I spied the empty white board that usually lists the pies of the day. Judy Higgins makes the pies, but only on the weekends. That gives me a another good reason to come back to Glen Rose for another plate of ribs.