Dining at Hard Eight BBQ is as much about experience as it is about the meal. During a recent visit to the original Stephenville location, I lined up with thirty other people, an impressive crowd for 1:00 p.m. on a Friday. Together we stood together facing cord upon cord of neatly piled mesquite and two giant burn barrels raging so hot that the perimeter is ringed by warning signs. Smoke poured from a half dozen stone-clad steel pits; the last one–the show pit–was a cornucopia that runneth over with at least twelve different smoked proteins. The whole thing is a big production.

When it opened in 2003, Hard Eight BBQ was devoted to the Hill Country-style of barbecue, in which mesquite (or sometimes oak) is burned down to coals that are then shoveled into a pit directly below the meat. Wood smoke doesn’t bathe the meat, a la the indirect-heat method; rather, fat drips off of the meat directly onto the coals, vaporizing the liquid and creating a wonderful and flavorful smoke of its own. That’s how Hard Eight produces all of that smoke you see when you’re waiting in line at one of their three restaurants (the other two are in Coppell and Roanoke). But upon closer examination, you’ll see that there’s not much coming off of the steel pits on display.

I watched the pit tenders open a couple that were full of briskets. The meat had been on for only a couple of hours, and the briskets were getting wrapped in foil to continue cooking. As I watched the process, I noticed the doors to another building open. This was where the rest of the staff was, tending to some gas-fired Southern Pride rotisserie smokers. When I inquired at the show pit about which items were cooked in those rotisseries, the meat cutter told me, “Everything but the brisket.”

At all three locations, I asked about the cooking method. At each one, I was told that Southern Prides do the bulk of the barbecue. So, to Hard Eight’s credit, they weren’t trying to hide the ball. Yet while it’s not deliberate deception, it was disappointing to hear that one of the great Hill Country-style barbecue joints in Texas has almost completely veered away from direct-heat cooking.

Disappointing, but understandable. Using rotisserie smokers is simply more efficient, especially for a place that attracts huge crowds. This past Friday night, I went to the Coppell location at 6:30 and waited in line for a full hour, a testament to Hard Eight’s popularity.

It’s easy to see why it draws the hordes it does. When visitors to Dallas want a quintessential barbecue experience, Hard Eight delivers. It’s the North Texas version of the Salt Lick, the famous barbecue restaurant in Dripping Springs that people from Austin have long their taken out-of-state guests to, an almost required rite of passage for giving guests a “Texas experience.” And like Hard Eight, the Salt Lick smokes most of their meat in rotisseries back in the kitchen. At both, the show pits up front are mesmerizing in a way a pair of stainless steel rotisseries will never be, something I witnessed first-hand during my visit as I overheard a group from Boston marvel at the mesquite fire and array of meats.

Crafting this classic Texas barbecue scene is probably why the photo on the front page of Hard Eight’s website still features chickens, spare ribs, and chops being cooked over a direct-heat fire, and why their promotional video states that “their meat is prepared using old-world techniques.” Cue the shovelful of hot coals being emptied into a steel pit–nevermind that that cooking method is used on only 1/12th of their menu.

And that 1/12th could stand some work. The brisket has some solid smoky flavor to it, but after so many hours in a foil wrap, the texture is closer to pot roast. It’s sliced thick, and still ends up as over-tender-yet-juicy chunks of beef on the platter.

If you want the flavor of the coals, your best bet is a menu item not displayed on the show pit. After several visits to Hard Eight BBQ, I’m convinced the 16-ounce grilled ribeye steak is their best dish. When you order one, a pitmaster brings a few shovelfuls of coals over to a large grill. The cooking surface is swiveled aside to make way for the coals, but once it’s back in place the steak goes over the fire. A liberal coating of rub (salt, pepper, garlic powder, and onion powder) goes on both side of the meat, and it’s finished off with a liberal dousing from a squeeze bottle of seasoned butter.

The ribeye was cooked a perfect medium-rare, still juicy and seasoned just right. The flavor from the coals elevated beyond a ribeye you might get at a run-of-the-mill steakhouse; so did the $27.50 price tag (which includes two sides).

But that’s a reasonable price when you compare it to the sad-looking, overcooked prime rib that goes for $25 a pound on its own. One big benefit of ordering from a pit with everything on display is that you can avoid making that $25 mistake. Unfortunately, the quality of their other famous cut, the pork chop, is harder to parse based on appearances. At about three-fingers thick, the pork chops are huge, but they’re individually wrapped in plastic. One day it was juicy (in Stephenville); on another it was as dry as the brown grass outside (in Coppell); on a third try they were sold out at 8:30 p.m. (in Roanoke).

The rest of the meats are hit-or-miss. Pork ribs vary from tender and well-seasoned to dry and too salty to enjoy; the turkey breast might as well have been roasted; the half chicken had great flavor and juiciness; and, as already noted, the sliced brisket isn’t a stunner, but the chopped version in a baked potato works quite well. Both sausages are good, and if you like spice, the jalapeño version delivers.

Hard Eight does sides and desserts well. Fresh, hot seasoned fries and hand-battered onion rings were standouts, while a chunky slaw was refreshing. The free jalapeño-spiced pinto beans are worth room on a full plate. Corn is available roasted (still in the husk) or boiled; I suggest the roasted. I asked for mine to be dipped in their garlic butter–a vat of which is kept on the pit to stay warm and melty, and which they will dip pretty much anything into–but I found it too strong for any of the meats. A variety of cobblers come pre-scooped into styrofoam containers. All are good, if basic.

I’m not saying you can’t have a good meal here, but knowing how things are prepared will help you know what gives you the best chances for a good selection. Anyone caught up in the appetizing visual of smoky steel pits should at least be informed that only the brisket ever sees the inside of one. And while Hard Eight has its issues with consistency, they have the same problem that any restaurant aiming for high volume will have. Besides, Texas will always have a need for huge barbecue houses like this one to feed the throngs of tourists looking for cold beer, real flames, and to maybe go home with the lingering smell of wood smoke in their luggage. 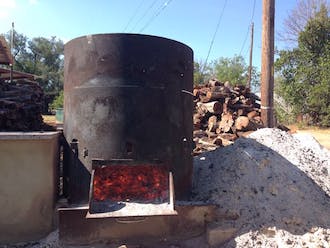 Where Has All the Hill Country Barbecue Gone? 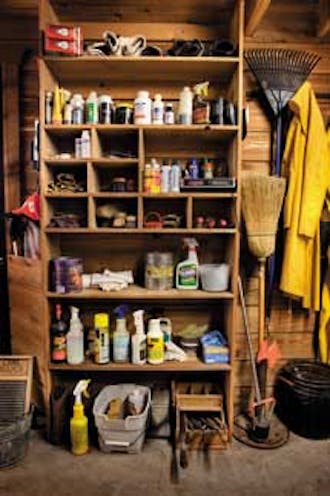