If you’re headed south on Highway 77 you won’t see the sign for Harris Bar-B-Que, but it doesn’t matter. A huge, black offset smoker will likely be blowing smoke across the road just south of downtown Waxahachie. Kelvin Harris used this smoker when he was darting around Cedar Hill and Dallas trying to find gas stations and parking lots to sell his barbecue. After too many years of operating less than legally, he decided to quit his day-job in aircraft maintenance and put all of his time and passion into a barbecue joint. Thus far it seems he made the right decision. 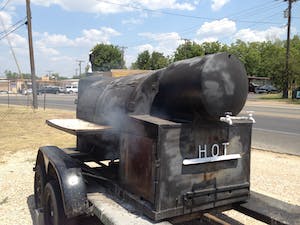 That smoker out front is admittedly for show. Harris has another larger pit in the screened in pit room attached to the back of the building. Between the two you’re going to smell smoke when you get out of the car. As Harris says in a recent promotional video, his barbecue is done “on the pit, straight stick, no gas, no electric.” The intensity of the smoke on the meat here leaves no doubt about the fuel. It’s done with hickory and oak, and some pecan when he can find it. A jet-black crust provides a thick coating over the brisket slices which were perfectly tender and moist. Between the flavors of smoke, seasoning, and beef, it was the smoke that overpowered the other two. It was great brisket that could only be improved by a cleaner smoke the leaves a little less residue. 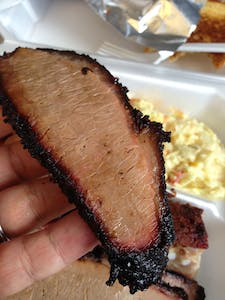 The ribs were thick spares. There was some sweetness in the rub and more good smoke, but with a better balance than the brisket. It took a little effort to get the meat off the bone, but they were by no means tough. A simple potato salad was of the mashed variety with some sweetness added. The beans were much more complex. There was nearly as much meat as beans from all the trimmings that were added. They got another layer of  flavor from a cilantro-heavy pico de gallo. 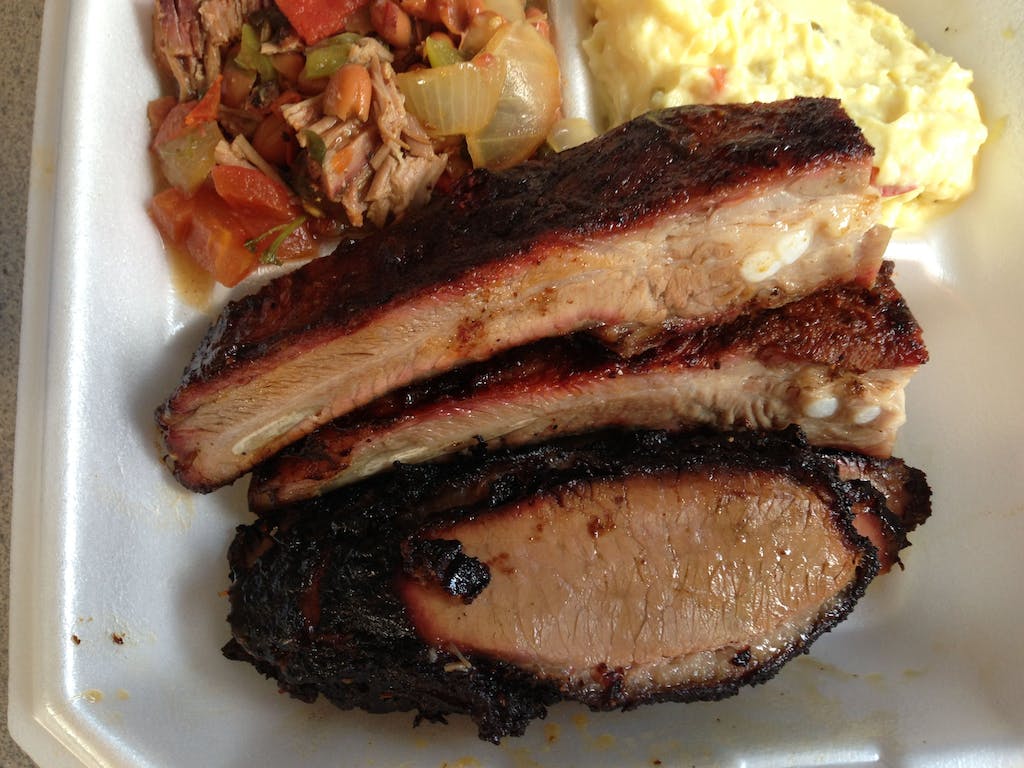 The sauces tasted like a doctored commercial sauce with the spicy sauce needing more kick to match its name. Its sweetness was a great complement to the smoky brisket in the chopped beef sandwich. A generous amount of sauced was ladled on the meat (they ask how you’d like it when ordering) which would make most commercially made buns too soggy to lift. This bun however was generously buttered and left on the griddle long enough to create an almost sweet layer of pleasantly chewy bread. This was a nice textural difference from the decadently fatty chopped beef. Some dill pickle chips and sliced onion turned this into a flawless chopped brisket sandwich. 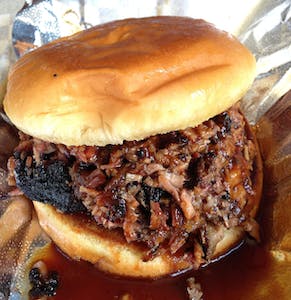 After my meal I talked briefly to owner Kelvin Harris. He said he had too much passion for barbecue to not make it his full time job. After just four months in business, that passion is showing. The meats here also show some real skill and barbecue experience. With a cleaner fire and a little less smoke on the brisket, it could be some of the state’s best. I’m glad it’s less than an hour from home.