This joint has been on my list for a long time. Back in June 2008 Texas Monthly’s “Top 50 BBQ Joints” listed Hashknife on the Chisholm, and a name like that really piqued my attention. Peadenville is barely a blip on the map at the crossroads of two state highways. Besides this joint and a gas station on the opposite corner, Peadenville is made up entirely of horse and cattle farms. As I neared the crossroads, the scent of smoke filled the air and the word “BARBECUE” come into focus, and my mouth started to water. 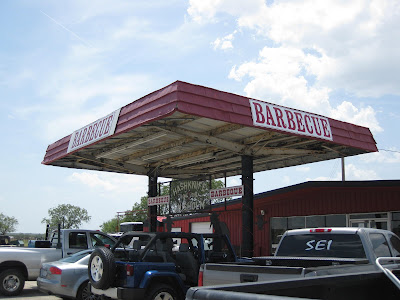 Orders are taken at the counter inside, then delivered to your table. The coveted three meat plate was offered, so I took them up on it. A plate piled high with ribs, brisket, beans, and coleslaw arrived as I breathed in the intoxicating aroma. Hot links arrived a few minutes later after a slight mix-up. The moist brisket, smoked in a Southern Pride over pecan and oak, was falling apart a bit, but the fat was well rendered. A good bark and nice smoke line provided a good depth a flavor and great smokiness. Pecan-smoked ribs has a great crust from a slightly sweet rub. The meat was moist and tender with robust smoky flavor. Those late hot links had a good snap to go along with the smoky, beefy flavor coupled with a black pepper and bit of heat. The homemade potato salad and kicked up ranch-style beans were a good addition. 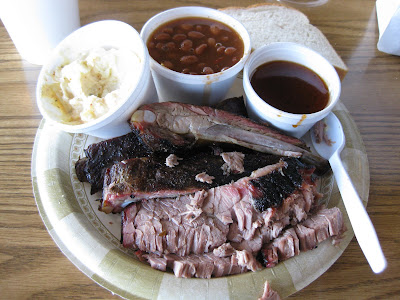 FULL DISCLOSURE: As I neared the door to leave, the pitmaster, “Big” Jim McLennan, hollered at me. He said he reads the blog and gave me a T-shirt (which oddly enough misspells the town’s name as “Pedenville”) and asked for a good rating. I told him his meat had already done the talking, but the shirt was a nice touch.