The United States has many beloved barbecue styles, but meat cooked over fire in the fiftieth state rarely enters the discussion. Hawaiian barbecue traditions have been exported by the Honolulu-based L&L Hawaiian Barbecue chain to twelve states and six other countries, but those restaurants don’t really cook barbecue. Rather, they specialize in plate lunches, which are, as they describe on their website, “the comfort food of the islands.” This is true. Plate-lunch shops are all over Hawaii and serve up iconic dishes like loco moco, chicken katsu, and oven-baked versions of kalua pig, and while they may put out good food, you won’t find a stick of wood at most plate-lunch joints.

I traveled around Oahu and Maui searching for the real barbecue of Hawaii. For the most part I passed up restaurants advertising brisket and ribs. I wasn’t interested in Hawaii’s version of mainland barbecue. I wanted to understand Hawaiian barbecue. I wrote previously about the most important barbecue tradition in Hawaii, kalua pig, and the challenge of finding an authentic, imu-cooked version. It was much less difficult to find the other barbecue that is equally revered on the islands: huli-huli chicken.

Huli-huli literally means “turn, turn”, and that’s how these whole, split chickens are cooked. They’re brined, then affixed to a rotisserie that hovers over a charcoal fire. The native kiawe wood (similar to mesquite) is also a common fuel. You can find it on plenty of restaurant menus, but it’s best to seek out the roadside stands that serve it because you can see up-close-and-personal how they’re cooking it.

I found some other surprises along the way, as good food certainly isn’t in short supply on the islands. This is by no means a complete list of great Hawaiian barbecue, but I wanted to share some of the great bites of barbecue that I enjoyed in Hawaii. (Most of these picks are on Oahu. Joey’s Kitchen is the lone exception in the Whaler’s Village in Maui.) 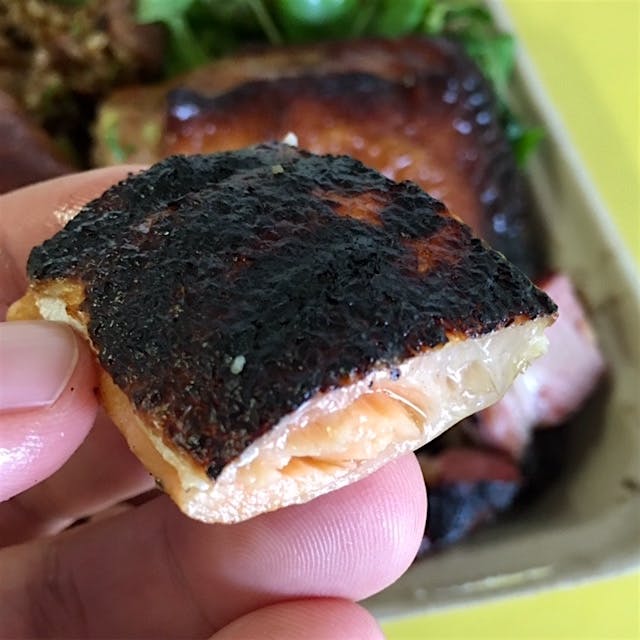 This tiny joint in the Kalihi neighborhood of Honolulu smokes a dizzying array of meats. Duck, chicken, pork, butterfish collars, and even a smoked pork burger fill the menu, but your first choice should be the smoked salmon belly. All of their meats get a good dose of guava-wood smoke in a huge Hobart chamber smoker, which is a smoker I’ve most often seen used by commercial sausage makers. The final step before serving is a dose of high heat on the charbroiler. With the heavy char and the deep smoke, these chunks of salmon belly were like Hawaii’s answer to burnt ends. Crisp, fatty, luscious, smoky, and a little sweet, these salmon bellies were the best–and most unique–bite of barbecue I had in Hawaii.

Joey’s Kitchen in Lahina on Maui 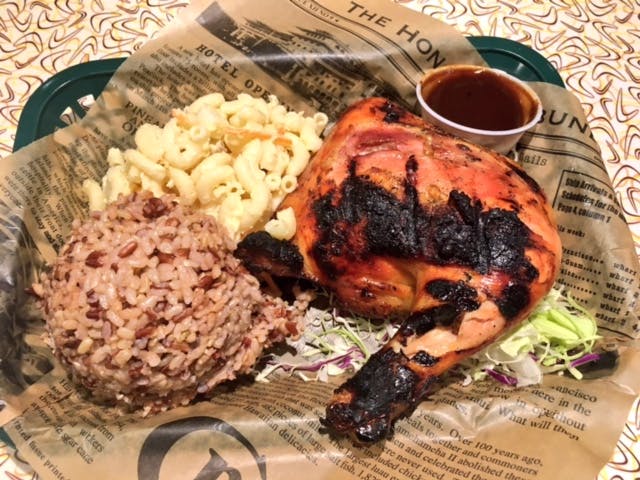 Chef Joey Macadangdang runs the best food court restaurant I’ve ever been to. The Subway next to it inside the Whaler’s Village shopping plaza can’t compete with grilled mahi mahi and kalua pig sandwiches, but it was their huli-huli chicken that was most memorable. The meat was juicy, and the skin was exquisitely crisp. The simple macaroni salad also went nicely with the smoky chicken. 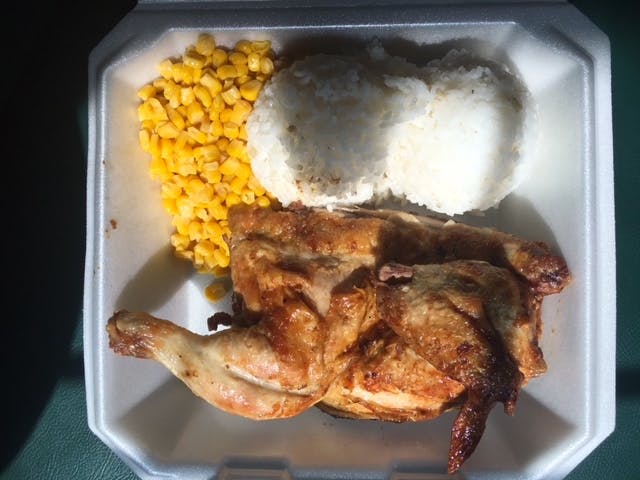 A rotisserie was being loaded with chickens in the parking lot as I walked in just before the dinner rush. These brined birds take just about thirty minutes to cook over the kiawe wood charcoal. The rotisserie turns so fast I thought I might catch a hot breeze, but it was some good chicken. The skin was more crisp than it looked, and the meat was incredibly juicy. With sides like canned corn and plain white rice, I’d stick with the $6.25 half chicken next time. 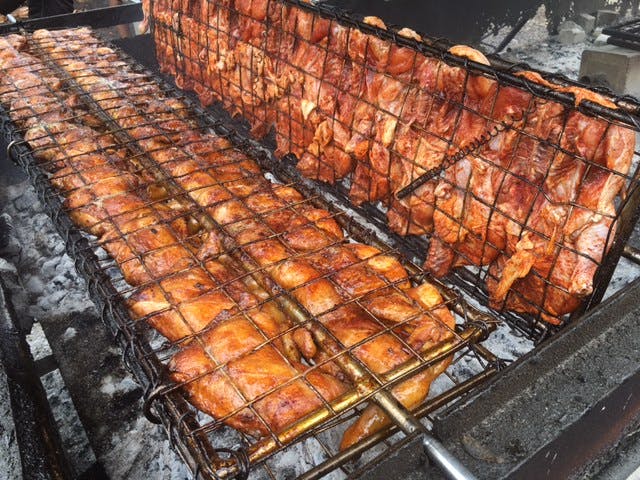 Mike’s is a roadside stand made popular by Guy Fieri who praised their huli-huli chicken (pictured at the top) for good reason. It was superb, as was the macaroni salad. The sound of kaiwe wood being split was the only thing that interrupted the peaceful setting. (The rooster running amongst the picnic tables stayed quiet. Maybe he was too scared of the roti to crow.) Flats of half chickens were being loaded onto the rotisserie trailer in preparation for a busy lunch hour, and the smell enveloped the whole site. Mike’s is in the running for the best chicken on the islands in my book. 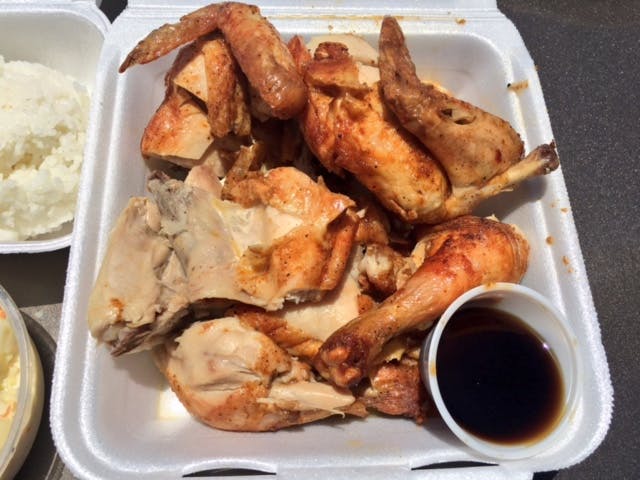 Chicken, salt, and rice are the only items on the menu at Ray’s, which sets up in an empty lot next to a grocery store on the North Shore on Saturdays and Sundays. It was certainly some of the best chicken on the island, but it was also the experience that added to the allure. There’s some effort in the trek up to Haleiwa from Honolulu, and you have to hit it on the weekend. A cutthroat parking situation must be navigated before you get in line to pay cash for chicken that you’ll likely eat on your trunk. A large trailer is loaded with mesquite lump charcoal (despite the name, I didn’t see any kiawe wood), and dozens of chickens spin above it at once. My wife and I split a $10 whole chicken, and it was gone in about four minutes. Maybe it tasted better because we had to work for it. The birds aren’t enormous, which helps in the tenderness department. Between the brine and the seasoning, there was plenty of salt, and the skin was nicely crisp. 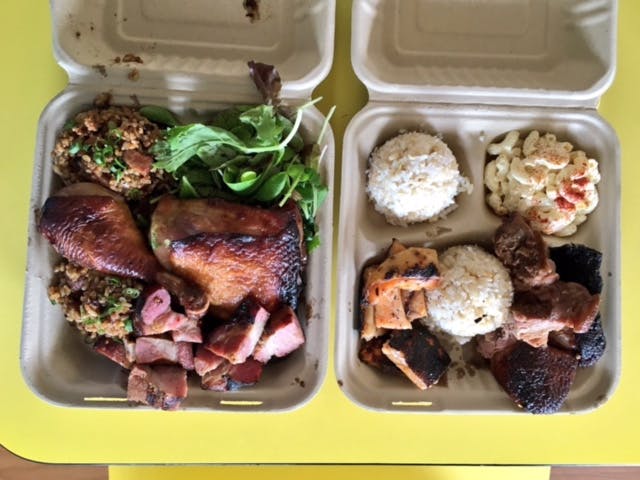 The greatness at Guava Smoked doesn’t end with the smoked salmon bellies. In a state where unseasoned white rice is ubiquitous, it was refreshing to find Guava Smoked’s version of fried rice. Chunks of their smoked pork shoulder are fried up with white and brown rice, oyster sauce, and soy sauce. It’s simple, but it’s loaded with so much good pork that it eats like a main course. 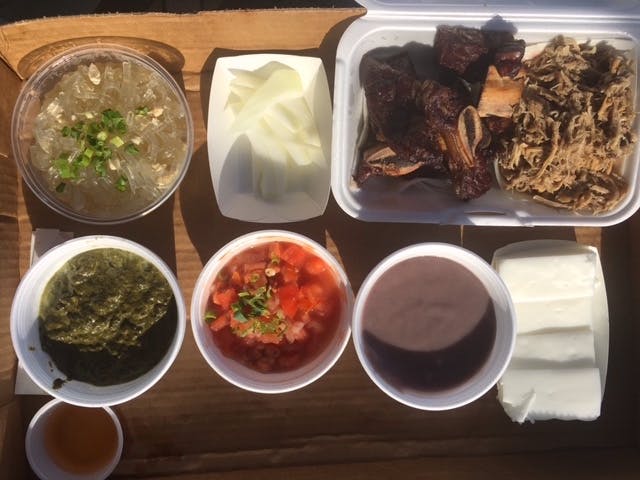 Few restaurants bother to cook their pig in an imu, the traditional pit used for kalua pig. They all call it kalua pig anyway, which leads to some confusion. At Helena’s, their pig doesn’t come out of the oven. They cook it all in their imu, and the result isn’t as soupy as many other versions of kalua pork that I tried.  Douse it with some chile pepper water and enjoy. 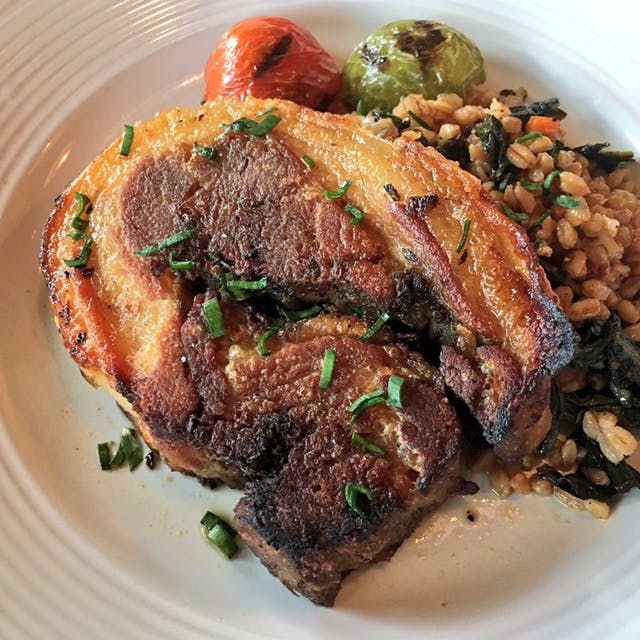 You can argue over whether or not this is barbecue, but it was an incredible piece of pork. Ed Kenney and his crew at Mud Hen Water wrap a pork belly around strips of pork shoulder before wood-roasting it. To serve it, a slice is seared hot until the edges get crunchy. The pork used for this special (it’s not always on the menu) was from a producer who captures wild boars and feeds them macadamia nuts for several weeks before slaughter. The fat was rich and nutty, and the meat was so succulent that I ate every bite. After hiking Diamond Head, I felt like I deserved it. A few days later I tried to order again after a snorkeling trip, but it was already gone. I’ll have to time my next trip to Honolulu to coincide with this dish being on a specials board. It was that memorably good. 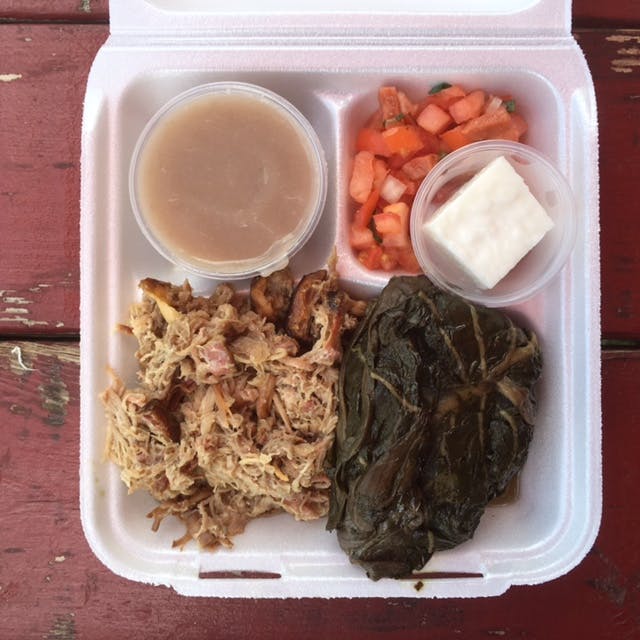 While not done in a traditional imu, I enjoyed the smoky pork, made in a cabinet smoker, at this walk-up on the east side of the island in Kaneohe. A trip out here puts you at a much slower pace than bustling Honolulu, so it feels right to linger at one of the picnic tables just outside the ordering window. Along with the smoked pork, the staff suggested the laulau. It’s a package of seasoned pork wrapped in taro leaves and cooked until fork-tender. Get it long with the “kalua” pork. 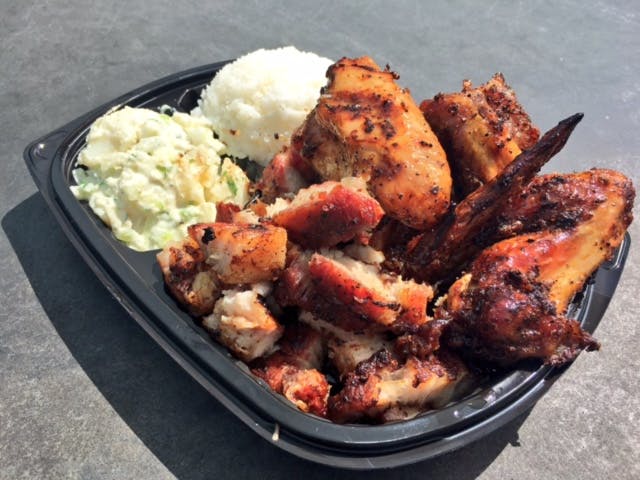 Yes, that Whole Foods. The location in the Kahala Mall in Honolulu was near the resort I where I was staying. A friend told me to check out their smoked fish selection, but I was predictably drawn to their barbecue counter. Most of their new stores offer smoked meats. In Texas you can get brisket, ribs, and sausage smoked on site in nearly every location, but this is the first where I saw smoked pork belly on offer. I skipped the brisket, and got the wings and pork belly. They’re seasoned heavily and smoked with kiawe wood in  Southern Pride just behind the counter. The pork belly is sliced thick and seasoned before smoking. When it’s served, they take one of the thick strips of the smoked belly and slice it into bite-sized chunks. The fat was nearly melted, and the salty pork nuggets were crunchy and tender all at once. I couldn’t deny how good they were, even if they did come from a gas-fired rotisserie in a Texas-based grocery store in Honolulu.