You won’t find it if you’re not looking for it. Hidden at a blind curve a good ways outside of town, and definitely not in view of the Interstate, Hays Co. Bar-B-Que has been flying under the radar. It didn’t help that they’ve already changed names since opening after receiving the dreaded cease and desist for their previous moniker. After lingering here for a bit, it reminded me of Milt’s Pit BBQ just twenty minutes north in Kyle. They’re both independent joints serving Central Texas style barbecue on butcher paper on the wrong side of I-35. 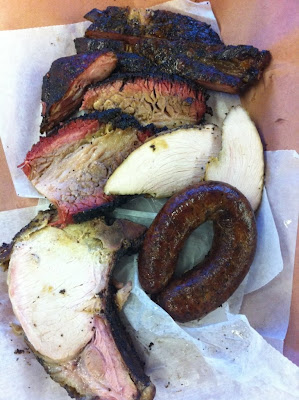 You can order plates here, but we were after some meat. It was nearing closing time so we promised to eat fast. Service wasn’t rushed even with the late hour, but some of the meats were showing fatigue. A thick cut of pork chop was a bit dried out, but the remaining crust was probably never as crisp as I’d prefer. A couple of sad dry ribs had been hacked apart from what remained of an old rack, but what followed was their most impressive gesture. The guy ringing up the order (Josh) noticed the ribs, and without a word or extra charge brought two thick moist ribs to our table and apologized. A thick crust of salt and black pepper provided a smoky burst on the ribs that was lacking in the chop, but the meat could have come off the bone a bit more easily. The fatty brisket was admirable at this late hour. Plenty of silky fat had created a moisture shield, so the meat beneath hadn’t dried out too much. With an exquisite crust and smokering, these slices were perfectly smoky and well seasoned. Slices of real turkey breast had somehow survived the whole day unscathed. The meat was perfectly moist and tender. The simple seasoning of smoke, salt and pepper let the poultry shine. Sausage making is an art rarely practiced by newcomers, but these homemade links are high quality. The mix is mostly brisket with some pork shoulder, and the seasoning is high in black pepper. The grind was a bit loose and the casings more crinkled than taut. They were excellent on their own, but a swipe through the Luling knock-off sauce (it’s almost identical to City Market’s) brought them to a new level. 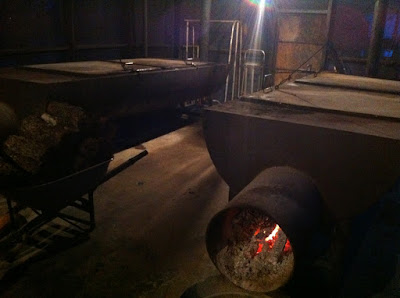 While taking a tour out back of the impressive pit room where mesquite an oak smoke fill the air, a call came in from the owner who was attending to business in Austin. An employee had tipped him off after I offered a post-meal, but pre-tour business card. I reassured the nervous voice on the other end of the line that his staff had treated me well in his absence. An uncomfortable first for me personally, but the call showed the dedication of the ownership – as if the meats weren’t example enough. My next visit (and there will be a next) will be planned closer to the lunch rush where I can hopefully sample the meats at their peak, but I certainly didn’t leave disappointed at dinner time.