The former McBee’s in Hondo has gotten a new lease on life. Heavy purchased the joint after moving back home from Austin where he had worked at Bert’s BBQ. He’s using the same methods of indirectly smoking with mesquite in the same brick pit used by McBee’s but the results are incredible. I was worried when we stopped in at eleven-thirty to find only two other customers, but once we left an hour later, the joint was full with a line out the door. 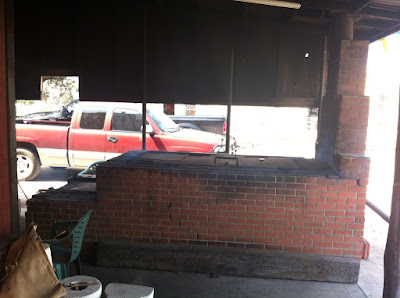 We got a sampling of meats that included sausage, pork loin, ribs, and both fatty and lean brisket. The sausage was gray, denoting fresh sausage with no preservatives. It was smoky, juicy, and perfectly seasoned. I thought it might be homemade, but instead Heavy has fresh, uncooked links delivered from Pollok’s, in Falls City, twice a week. It’s worth the shipping cost. Pork loin is a lean cut that’s apt to dry out, but this one was juicy with a deep smokiness. The simple seasoning of just salt and cracked black pepper served it and the other meats well. 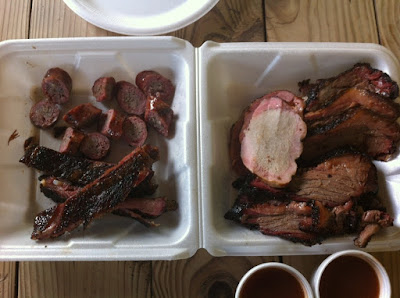 The spare ribs were perfectly tender with a nicely rendered fat layer. The bark gave them a deep smokiness, and they were tending toward dry in a good way. A thin, tomatoey sauce had plenty of black pepper and vinegar with just the right amount of sweetness. It was so good I was drinking it from the cup, but the irony was that I wouldn’t dare use it on any of the excellent smoked meats. 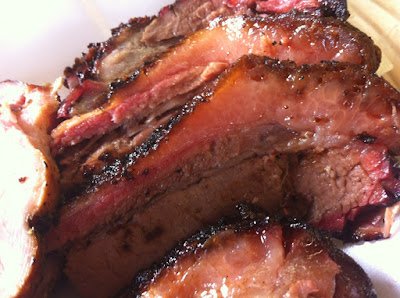 As I watched the deep-black-crusted brisket relax onto the cutting board I knew I was in for something good. Heavy’s knife glided effortlessly as each slice fell gently onto the next. The beef neither quivered nor bounced. The fat melted onto my fingers as I brought a few finger-fulls to my mouth. I braced in anticipation, and it didn’t let me down. Even the thick fat that remained was good to the last bite, holding onto the smoke tightly. The beef was buttery tender no matter if it was from the moist or lean end, and every slice had a deep smoky flavor. I was even more impressed when I learned that he smoked with all mesquite and refused to pre-wrap the meat in foil while cooking, otherwise known as “the Texas crutch.” To manage a mesquite fire in this way takes real skill. If I’d just ordered brisket, I would have been ridiculously impressed, but with all of the other excellent meats Heavy’s is a must-visit from anywhere in the state.