The fire burns brightly in a brick pit out front of Heavy’s in Hondo. It’s a hulking brick pit built by the McBee family back when they opened this barbecue joint, and it’s prominent location on the front corner of the building, along with the smoke that pours out of it, is a tempting advertisement for travelers driving through town. Back behind a tarp is a stainless steel Southern Pride rotisserie smoker. It looks like it might be purposefully hidden, but owner and pitmaster Darryn “Heavy” Bernal doesn’t hesitate when I ask him about the two cookers. On the rotisserie he says “it’s so much easier. I don’t have to baby it.”

Barbecue purists, and I count myself in that group, generally scoff at the notion of making barbecue easier. But then, we don’t get to a restaurant at 5:30 every morning, and stay until 9:00 most nights. That’s the normal day for Heavy and his wife Kim who opened this place four years ago, so stoking a fire several times throughout the night doesn’t fit into their reality.

In the morning, Heavy checks on the briskets that have been cooking overnight in the rotisserie, and lights the mesquite in the brick pit to cook the rest of the menu. Lunch and dinner both are served most days, so if items start running low during lunch, Heavy loads the rotisserie to cook through the afternoon while he serves his customers. It’s a necessary convenience given his small staff.

During lunch last weekend, the ribs from the brick pit were intense, with too much mesquite smoke clinging to the bark. The brisket was more mellow. It still held plenty of smoky flavor, which would likely have been overwhelming if cooked in the same low, slow fire as the ribs. Sometimes, a little less smoke is better. 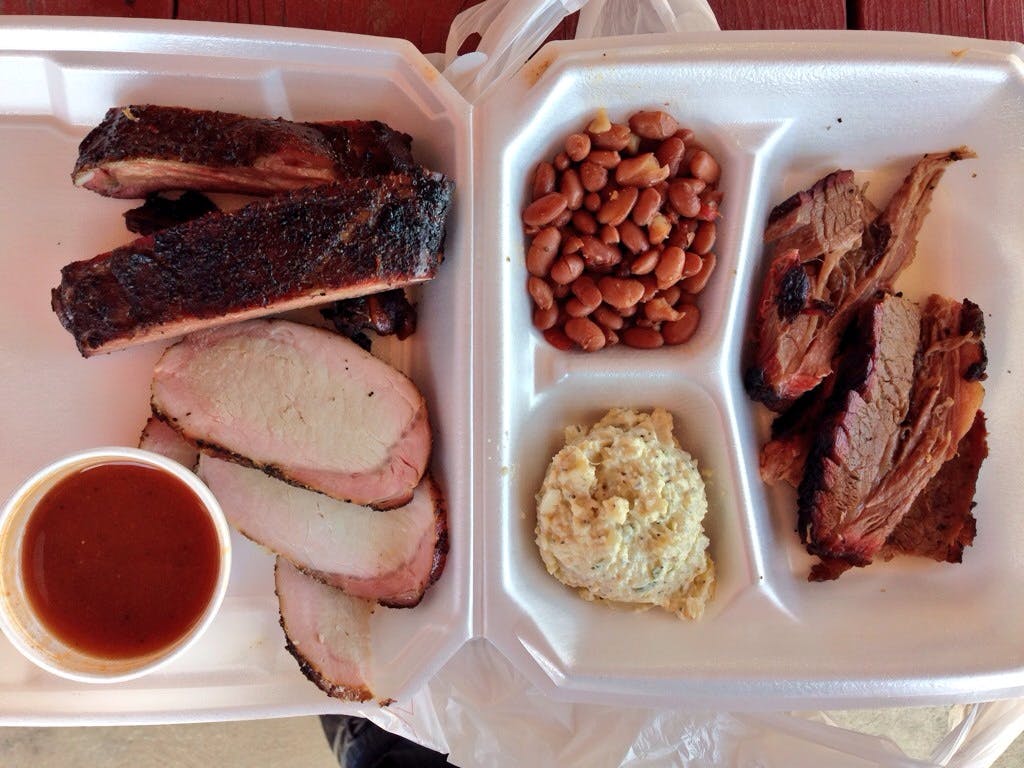 Rotisserie or not, this is good brisket. Thick slices had a black crust, and plenty of good fat left on. It was well-seasoned and moist, but cut a bit sloppily. Besides the heavy smoke, the ribs were very good, if a bit toothsome. The peppery bark provided some good heat without being overwhelming. That same peppery rub also graced the juicy pork loin. It went particularly well with the homemade sauce. This thin tomato-based sauce wasn’t too sweet with a nice acidic kick. It was so good it was drinkable.

The sides are simple, but well made. The pinto beans are good and salty with plenty of flavor without being fortified by meat. A scoop of potato salad was somewhere between cubed and mashed, and was bound with a mayo and mustard base.

After grazing over my entire order, I wanted more. Back inside, a glass holding case had a few more tempting items on display. A few slices of turkey were smoky, juicy, and peppery. It was turkey that made me feel good about recommending poultry instead of (okay, maybe alongside) the beef. 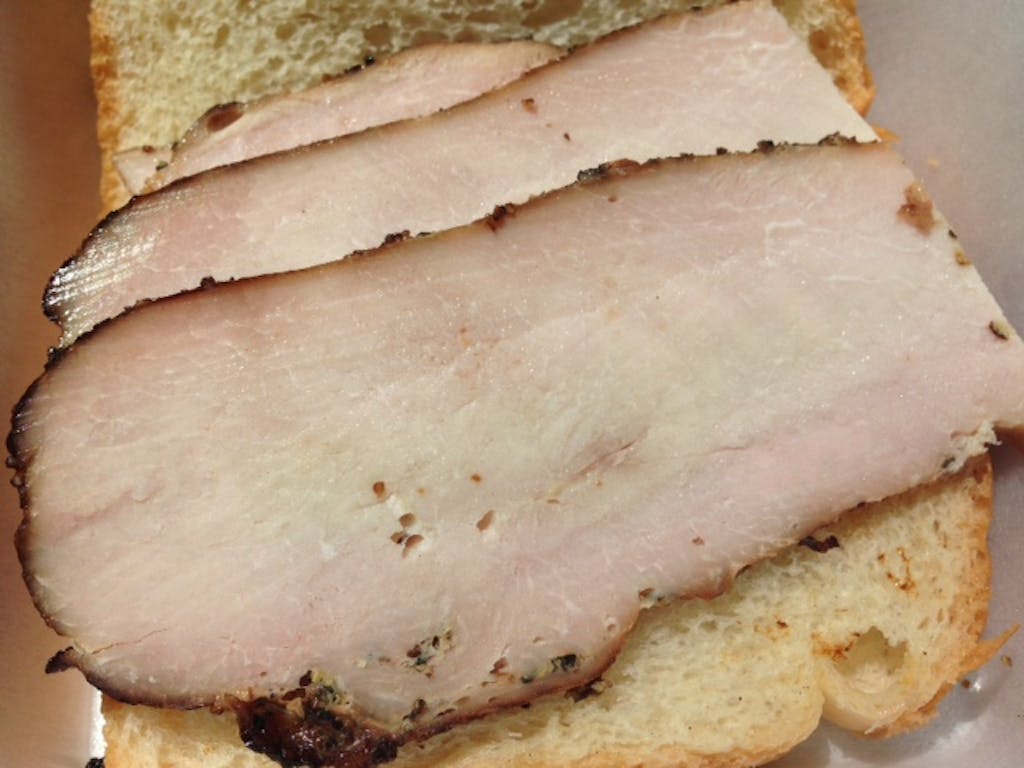 Marcian Pollok emigrated from Poland in 1854 with a sausage recipe, and they still make it at Pollok’s Market in Falls City, five generations later. That’s who Heavy orders two hundred pounds of sausage from every week. He gets it in raw and smokes it over mesquite until the casings are about to burst. There’s a rush of fat and garlic in every bite, with plenty of pepper coming along for the ride. It’s a great sausage, so don’t miss it like I almost did. 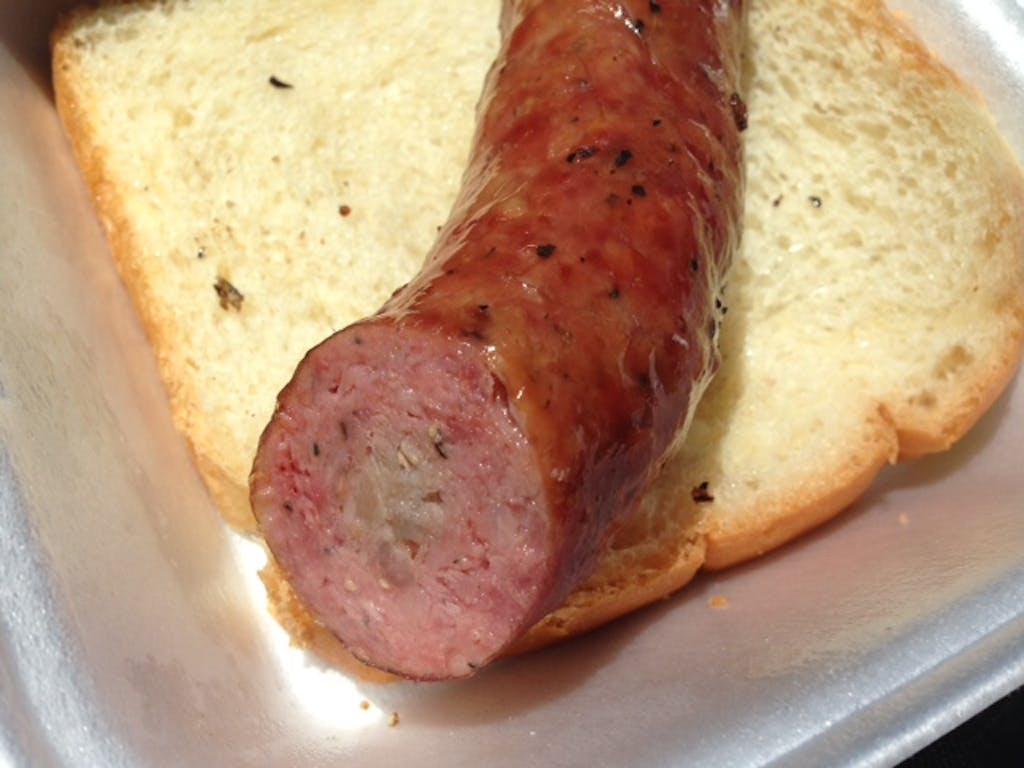 Heavy learned the barbecue trade in Austin when he worked for Bert’s BBQ, but he moved back to Hondo to raise his kids and live near the rest of his family. Here along Highway 90 on the south edge of the Hill Country, this is the best barbecue for a long ways. Hondo residents should be thankful that Heavy came back home.