Bacon is more popular than ever; cooking with lard is no longer taboo; and lardo—cured pork back fat—is a luxury item on charcuterie plates around the country. America is slowly rediscovering its love of pork fat, and yet good, fatty pork is still hard to come by.

It all started back in 1977 when the U.S. government released the first dietary guidelines, brought forth by a committee led by George McGovern. The meat industry went ballistic when the report called to “decrease meat consumption.” After a series of hearings, a suggestion by Senator Bob Dole to amend that guideline to say “Increase consumption of lean meat” was accepted by the meat industry. From that point forward, every edition of our country’s dietary guidelines has suggested the consumption of lean meat.

Pork preferences, at this time, had already been trending toward breeds without excessive fat. Lard began to be replaced with vegetable-based Crisco, and Americans began to demand cuts with less fat. A 1956 film from the University of Illinois entitled Pork People Like was intended as a message to pork producers to start raising what they called “meat-type hogs” which were leaner and longer. It sent us on our way to the dry, flavorless pork that dominates the market today.

In the film above, a woman is shown making her meat selection at the grocery store. She examines and passes on the fatty cuts of pork, and chooses a chicken instead. The narrator takes note. “Here’s something that she likes, and the pork industry has lost another sale.” And following those dietary guidelines from 1977 they continued to lose out to chicken. In 1960 Americans ate three times the amount of pork as chicken, but that gap began to close quickly after 1977. Just twelve years later, we began eating more chicken per person than pork.* It was in the midst of that rapid rise of chicken that we started hearing about “Pork. The Other White Meat.”

From that point, the pork industry’s chips were all in on lean. All of their efforts went toward creating breeds with less and less fat. And it wasn’t just back fat that suffered, but the intramuscular fat—marbling—also disappeared. What also went missing was any diversity in hog breeding. The lean American Yorkshire heavily dominates the market. Not only is it lean, but it also grows incredibly fast. The general rule of the pork industry is that a normal hog will be ready for slaughter at an age of three months, three weeks, and three days. In that short lifespan it’s hard for anything but lean muscle to develop, thus the death of marbling.

Pork now has less fat than ever, but it has less juiciness and pork flavor than ever as well. What the pork industry values is not flavor. The description of their own product on the “Pork. Be Inspired.” website (that’s their new motto) doesn’t even include one mention of good flavor, but there’s plenty about how lean it is. “[M]any cuts of pork are as lean or leaner than chicken. Pork tenderloin, for example, is just as lean as skinless chicken breast…. Any cuts from the loin—like pork chops and pork roast—are leaner than skinless chicken thigh.”

But won’t that make the meat dry? Their answer is just brine it, baby. Brining is a method of soaking lean meats in a salt and water solution. It’s similar to marinating, but the primary purpose is to introduce salt and moisture into lean cuts of meat like poultry, and now pork. In fact, at my local Kroger in Dallas, their entire line of store-branded pork products—called Moist & Tender—are injected with “up to 12% water, salt and sodium phosphates” solution (quoted from the label). I bought some. In fact I procured four different types of pork loin to take home and smoke.

The Kroger pork loin (on sale for $1.99 per pound, normally $3.99) came boneless since bone-in loin and cryovac don’t mix. Over at Central Market in Dallas they carried the bone-in loin rack ($7.99 per pound) in the meat case. It’s the “All Natural” HEB brand of pork, which simply means the hogs weren’t given more antibiotics than required medically, and that the meat hasn’t been injected with a salt solution. Also at Central Market was a tomahawk cut (with a longer rib bone) of a heritage hog breed.** This was Berkshire pork ($11.99 per pound), known as “Kurobuta” in Japan and prized for its great marbling. Rounding out the four options was a whole loin rack from Legend Meats in Gorman, Texas who specialize in Red Wattle hogs. Larry Barton owns the ranch and will be supplying two Red Wattles for the TMBBQ whole hog event scheduled in Dallas this coming Sunday. When I visited the ranch last week, he gave me the pork loin as a sample for smoking, but their hogs are generally sold whole. There’s just not enough of a market yet for the individual cuts.

I seasoned them all with a sprinkling of a 50/50 salt and cracked black pepper. They were smoked in an offset smoker fueled with pecan and oak at a temperature that varied from 275 to 400 degrees. This is a good cut of meat that doesn’t need to be treated as carefully as a brisket that has all that collagen to break down. Cooking these at high heat won’t damage them, in the same way that they’d be fine over direct heat on the grill. The important thing is to pull them off the smoker before they get above 160 degrees (I take mine off a little earlier), at which point they’ll really dry out. For the commodity loins, that took about two hours. For the heritage loins that were a bit bigger, it took about three hours. 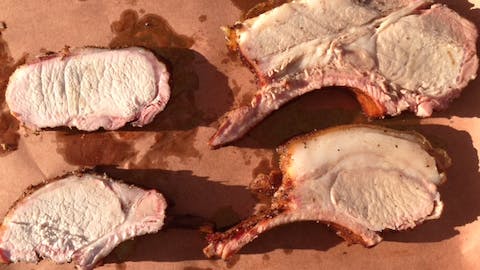 I began by tasting the Kroger pork loin. It was juicy (as it should be with the salt brine and added phosphates), and had a familiar flavor enhanced by smoke. This is similar to the pork loin that you’d get at most Texas barbecue joints that have it on the menu, and at $1.99 per pound, who can blame them. Next up was the HEB bone-in loin. It had a tighter muscle structure and was a bit drier, but it at least tasted like pork. Still, that didn’t warrant the premium price over the Kroger option, but all the brine in the Kroger brand transformed it into a generic protein. Blindfolded, I might have thought it was chicken. 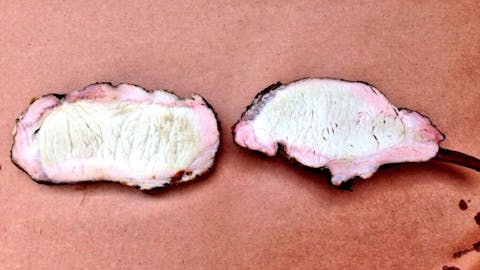 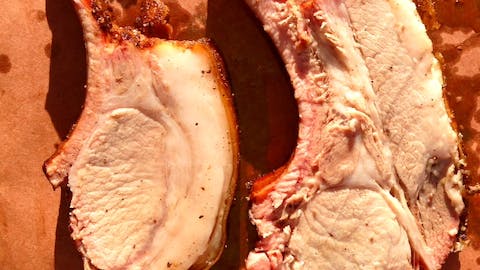 Moving on to the heritage breeds was literally like eating a different animal. The bites were juicy, rather than just moist. That was the marbling which provides the pleasing unctuousness that saltwater just can’t. The generous fat cap also captured the flavors of the smoke and rub much more noticeably. An eighth inch outer layer of fat actually slid off the Red Wattle and it was a dead ringer for bacon. A five year old neighbor who doesn’t like meat couldn’t stop eating the Berkshire. The outer layer of meat was so rich and tender it ate like a piece of spinalis off a beef ribeye. This was premium pork worth the premium price.

It’s time we start treating pork more like beef. This is one area where the pork industry and I agree, sort of. The Pork Council released new pork cuts names last year, with monikers familiar to beef lovers like porterhouse and ribeye, but they should also look at the value placed on marbling in beef. Steakhouses that carry lean Select grade steaks likely have an attached buffet. Anyone taking their steak seriously is eating Choice and Prime steaks. That’s where the fat is at, and that’s what makes it taste so good. You can buy a 90% lean ground beef, but is that what you want to make a juicy burger out of? Then we shouldn’t settle for ultra-lean pork as our only option at most grocery stores.

Heritage hog breeders across the country are trying to reintroduce fat and flavor into pork. Chefs and consumers alike have begun to realize they want their fat back, meaning some back fat is in order. Now it’s our job to support those producers as often as possible. If you see heritage pork on a menu or on the grocery store shelf, buy it. We should’t have to shop at a gourmet grocery store or drive to a ranch just to get good pork, and we shouldn’t have to brine our pork to make it edible.

**For more info on Heritage hogs, see this description of breeds from Cochon 555