It was a phone call that brought me back out to Hickory Hill BBQ. It sits along a stretch of State Highway 31, right on the western edge of the East Texas pine curtain. I’d driven by it a few times, but always found it closed, then owner Kerry Shaw called to alert me that I was missing out on the best barbecue in the world. “We’re trying to be number one in the world.” After a pause, he reiterated. “I’m serious!” 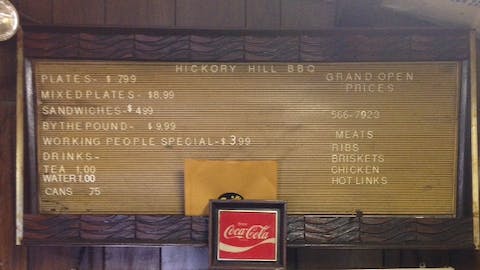 Shaw was working alone behind the counter when I stopped in. It was just before what should have been the lunch rush on a Friday, but none materialized. One other customer was paying up as I pondered my order. The “Working People Special” was too well named to pass on, and at $3.99 for two pieces of smoked chicken and a side, it was a heck of a value. At least it would have been a good value if the chicken had been edible. The skin had soaked up so much heavy, dirty smoke that its surface was blackened with a finger-staining layer of soot. Even removing the skin couldn’t eliminate the sting of creosote on the tongue so strong it lingered beyond the meals that followed it. 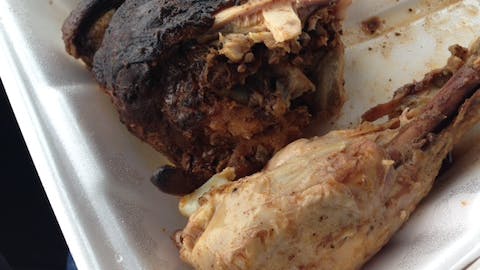 The rest of the meal was less offensive, but still little reward for the wait. Without a single other customer in the restaurant, thirty-five minutes passed before the order was presented and I was able to pay. In that time, I counted no less than five separate and unsolicited assertions from Shaw that he was on his way to being the best barbecue joint in the world. Immediately prior, I had eaten a few slices of superlative brisket at Stanley’s Famous Pit Barbecue in the middle of Tyler. Hickory Hill’s was closer to salty and tender roast beef, but it would be a stretch to crown it even the best in Tyler. 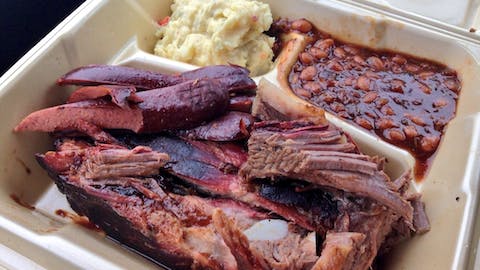 Rounding out the combo plate were hot links (from a secret supplier) with the consistency of a hot dog, and ribs so overcooked the meat sloughed off into a pile as the bone slid out cleanly. A scoop of canned beans floating in a lake of commercial barbecue sauce was sweeter than most desserts, making the sweetish potato salad taste subdued in comparison. At least the old-fashioned pricing of $8.99 for the whole plate kept it from being much of an investment.

That old time pricing echoes the motto of Hickory Hill. “The Way It Used To Be,” is reflected in the low cost and in the all-wood cooking style. Shaw says he uses a proprietary mixture of five woods (presumably one of them is hickory) in his offset smoker. His cooking methods mirror those of the previous owner, Mr. Big. Shaw grew up in the area and remembers visiting this same building when he was a boy with his grandfather for Mr. Big’s barbecue. 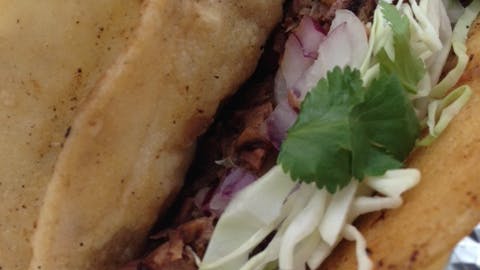 The Volcano Taco is a modern touch, and was the one redeeming item on the menu. Chopped brisket, cabbage, and cilantro with a squirt of lime came wrapped inside two corn tortillas. The different textures played nicely together. The roast beef-like brisket was well suited for the taco, but a decent taco won’t make you the best barbecue joint in the world, or in Tyler.