Johnny Doyle cooks on a gas rotisserie, but he’d do it differently if he could. He takes pride in the barbecue he puts out in his nearly forty-year-old Denison restaurant, so when a pit fire destroyed his Oylers, he wanted to replace them. “[J&R Manufacturing] told me it would be a couple months before I could get an Oyler built, so I bought two Southern Prides instead.” Now he just can’t get the bark to set on his ribs as he’d like it to. I can’t be sure if it’s the cook or the cooker, but he’s right. 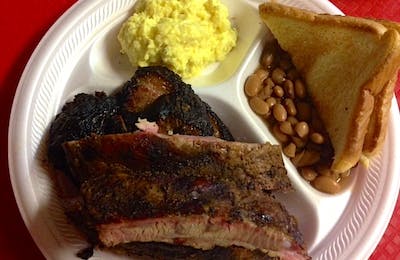 The ribs were tender and came away nicely from the bone. They even had a good smokiness, but the rub sat atop the meat like wet sawdust. The meat and rub had not become one, and there was no bark to speak of. That textural variation of crisp crust and moist meat is what makes a dry-rubbed rib so pleasing, but this rib was crying for some sauce. Luckily, they make a couple good ones here. The tomato-based version wasn’t too sweet and had just a touch of vinegar, and it livened up the ribs nicely.

Doyle’s other sauce is a regional specialty. He makes a brown gravy sauce from the flour-thickened pit drippings. It’s thick and heavily seasoned, and makes for great Texas toast dipping.

Johnny and his wife Shawn make all the sides too. In fact, there isn’t much here that’s not from scratch. If you’re used to beans from the can, a trip through Sherman, Denison, Bells, and Bonham will be a pinto bean revelation. They know how to cook them in these parts. There are few ingredients and they aren’t fortified with leftover chunks of barbecue. They’re just beans that are well cooked in a pot for long hours and seasoned with just enough salt. A side of potato salad was anything but store-bought. Chunks of egg, nearly mashed potatoes, and good kick of yellow mustard made for a bright counterpoint to the beans. Sides are self-serve along the cafeteria line, so you can get a few spoonfuls if you like. 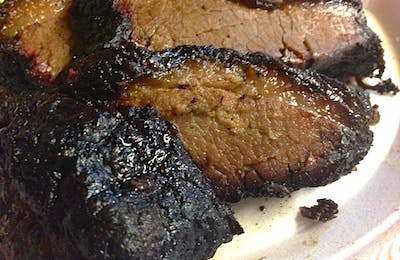 Then there’s the brisket. In these parts you normally need to beg for any crust to be left on the meat. The fatty end is usually chopped for sandwiches, and the sauce on the side is a foreign concept. But Johnny Doyle does it differently. A nice line of rendered fat hid beneath a crunchy bark created from hours in the pit and few on the steam table. Brisket in the mid-afternoon is usually dried out when held in this manner, but the Hickory House beef was juicy and tender. There was plenty of smoke, pepper, and salt to flavor it too.

Maybe the ribs were better back before the pit fire, but it looks like Doyle has found his sweet spot with the brisket. He recognized me just before I left, and asked me for some tips on the ribs. I’m not sure if it was for flattery or if he was really looking to improve, but it’d be worth returning to find out as long as he keeps serving brisket like that.