If you’ve spent any time on the interstates of Texas, you’ve probably seen barbecue restaurants advertised on numerous billboards, blue service signs, or obnoxiously huge structures situated along the access road. Who among hasn’t seen one of those logos and thought, is the food worth stopping for? If a place needs that much advertising, maybe the barbecue tastes terrible. Or, the food may be so good that thousands of customers stop in,  adding dollars to a huge advertising budget. In any case, to save you, dear reader, from eating terrible food, I traveled along I-30 from Texarkana to Fort Worth and stopped in at every barbecue joint with one of these signs. Starting at Exit 1 in Texarkana, Arkansas, I listed the places and gave them a ranking (see the color-coded key below):

Green ♦♦♦– Exit here for barbecue, even if you have a full tank of gas
Yellow ♦♦– If you have to pee anyway, this might be a good stop
Red ♦– Keep driving 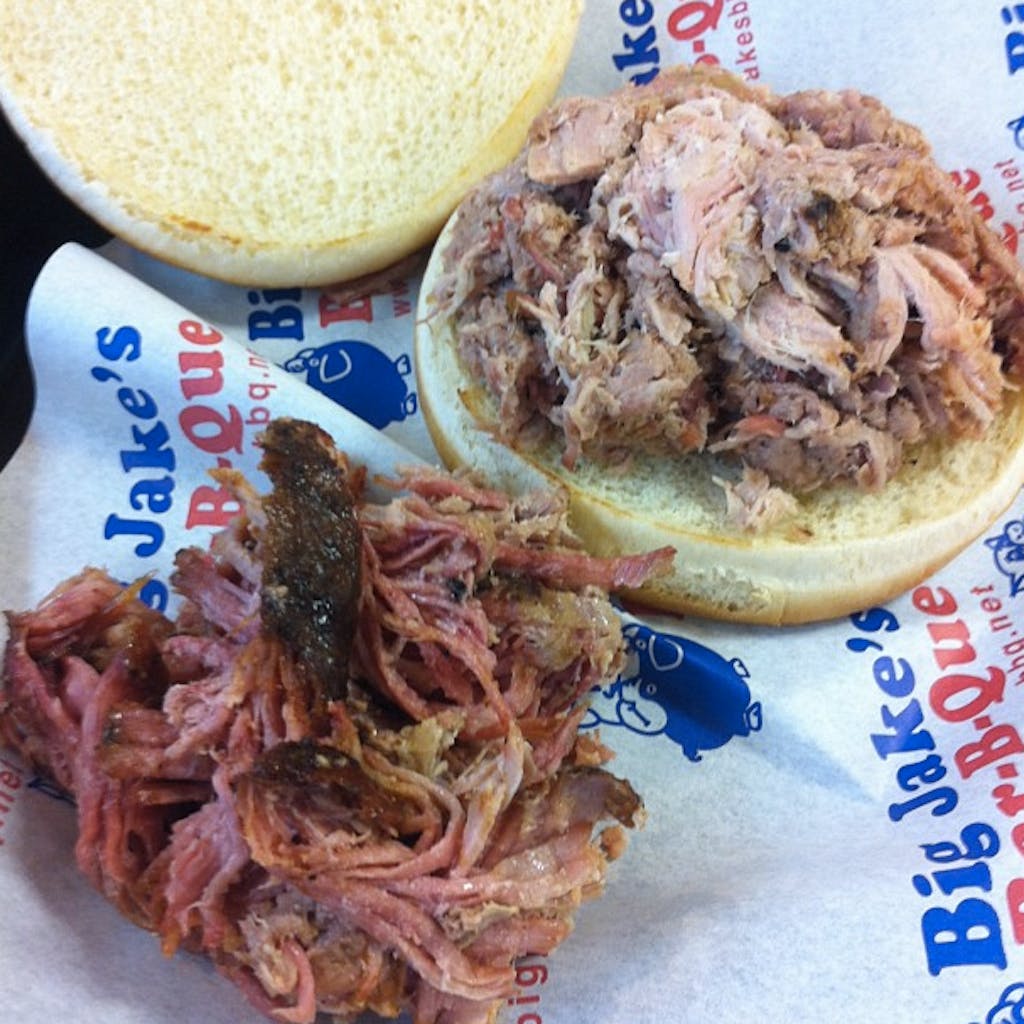 Big Jake’s (three locations in Texarkana) made it on to Texas Monthly’s honorable mention list with their excellent pulled pork sandwich.  Oddly, the chopped pork was dry with no smoke flavor, coming in at a distant third on the menu behind the aforementioned sandwich and the sweet pork ribs. Skip the lean and dry sliced brisket, but don’t forget a fried pie on your way out. 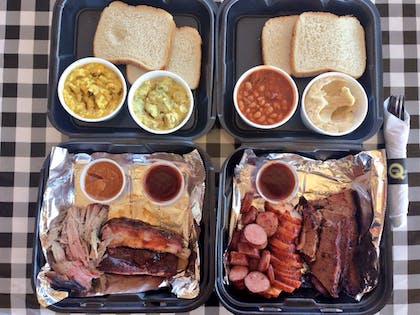 Naaman’s is making the best barbecue in this area of Texas. The brisket and home-made sausage are can’t-miss items, while fans of sweet and ultra-tender ribs will like this version. For a complete meal, add the meaty beans and cheesy corn, and a slice of the incredible cheesecake. 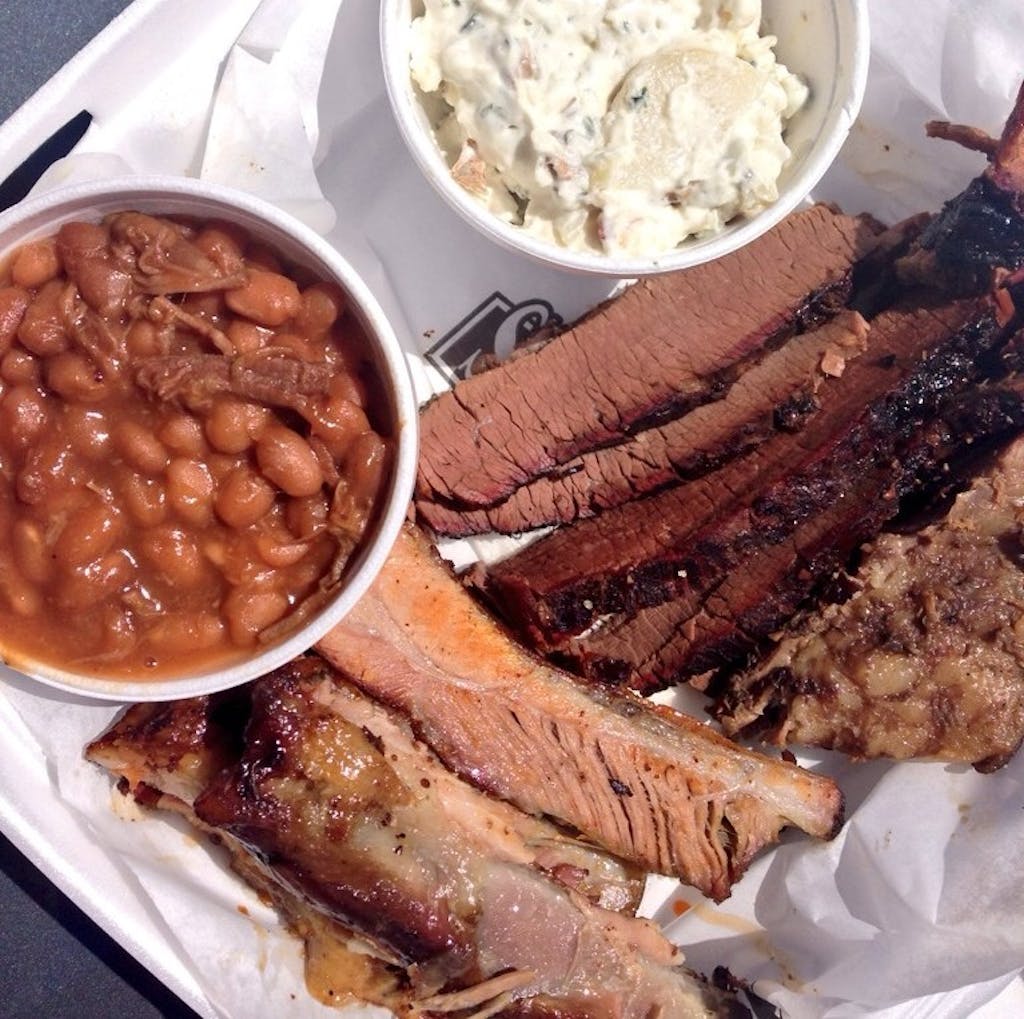 It’s pretty novel that you can buy a chia pet in the shape of Billy Sims’s head here, but the only Texas outpost from the University of Oklahoma football star’s barbecue chain wasn’t worth a return visit for the food. The brisket slices come only from the flat, and the meat is dry and flavorless. Overcooked ribs don’t help. 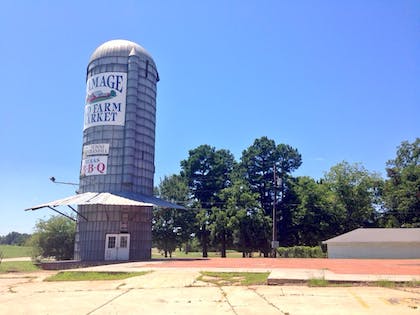 This stop is only included for clarity. This joint burned down in 2011 and has not been rebuilt, but a billboard still stands on the highway directing folks to Hooks, and the old silo with the original signage still sits alongside the highway. There’s no need to stop unless you plan to pay your respects. 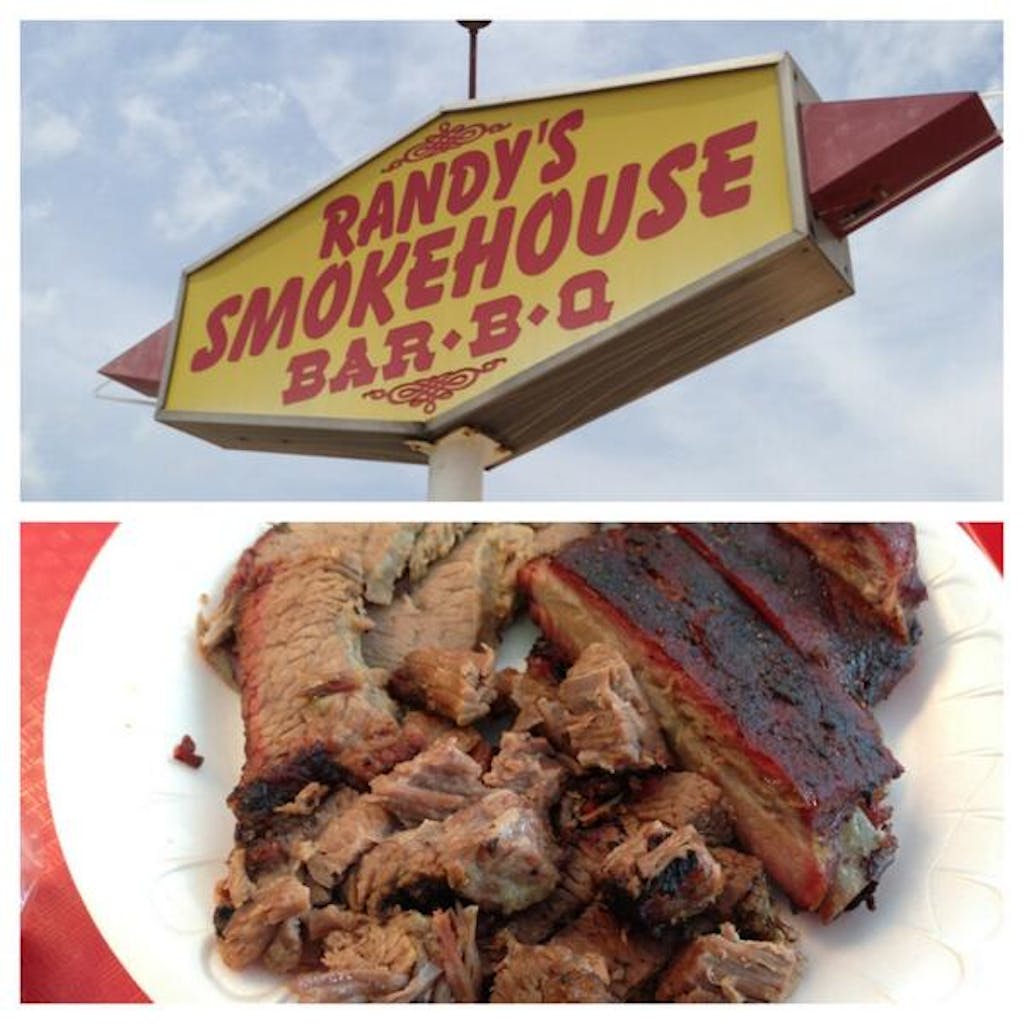 Get the ribs, and skip the brisket. They also have burnt ends on the menu, which aren’t bad if you really need a smoked beef fix. There’s also plenty coming out of the deep fryers here – everything from corn nuggets to corn dogs. 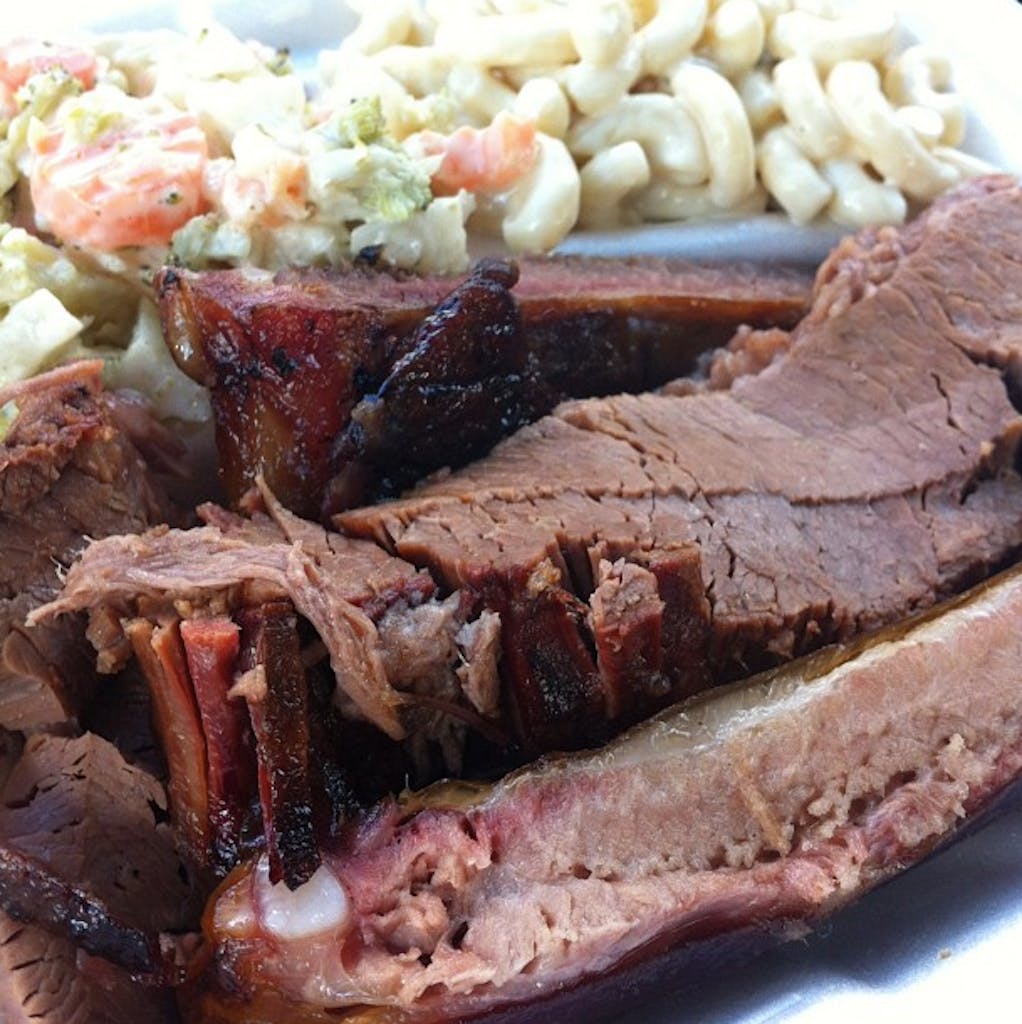 When the billboard advertises “The World’s Best BBQ,” you can be pretty certain that it’s not. Blalock Bar-B-Que doesn’t buck that trend. In fact, it’s some seriously soulless barbecue. The ribs tasted of day-old, dry pork roast, while the brisket just crumbled apart. The neon yellow banana-flavored pudding added insult to injury. 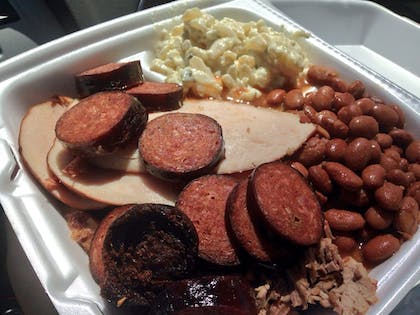 I stared at the meats on the cutting block as I placed my order thinking there was no way the server would put that petrified end of the sausage into my to-go box. She did. At least it made the rest of the dried out sausage seem juicy by comparison. They don’t serve ribs, so I went with turkey which tasted straight form the deli counter, and the sliced beef was dry and flavorless. 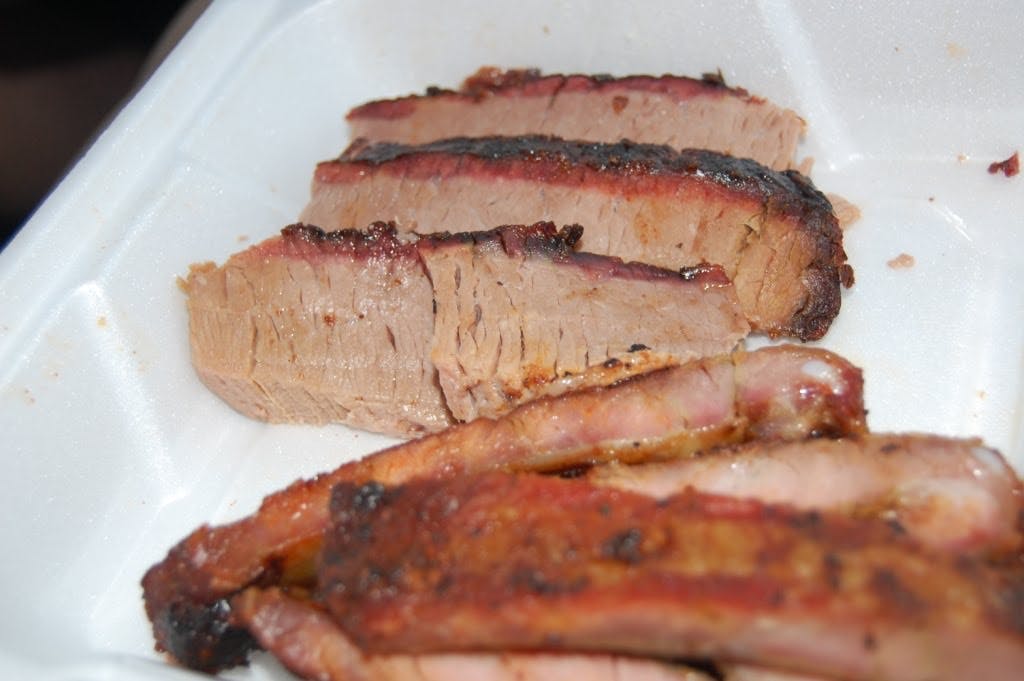 Most locations of this East Texas barbecue chain won’t ever be among Texas’s greatest, but in their defense they aim for the middle and hit it every time. The brisket is passable and the pork ribs are better than most in the area. Side items are basic, but done with enough care to be just fine when you’re hungry for barbecue. 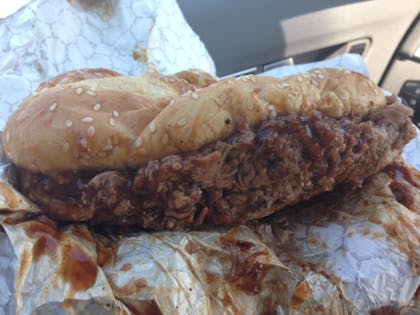 The sandwich that graces the billboards of Soulman’s barbecue is the least appetizing food image that exists in restaurant advertising. A chopped beef sandwich on a hoagie roll just isn’t that photogenic, but that’s the signature sandwich of Soulman’s. For $5.99 you too can get a “Soulman’s Sandwich.” There’s a lot of meat in there and plenty of sauce, and the finished product doesn’t look much different than those billboards. I guess they get a point for truth in advertising, but the sandwich itself is pretty bad. Dried out brisket is ground rather than chopped, then covered in a thick, sweet sauce. The meat flavor that does come through makes you wish there was more sauce. 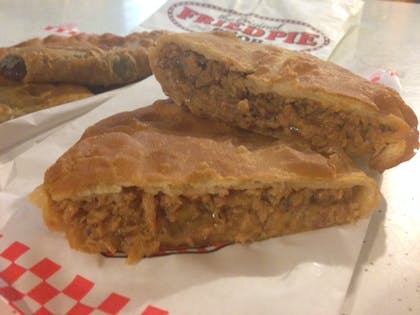 Baker’s Ribs is a chain that generally puts out good barbecue. The sliced brisket is serviceable, and the namesake ribs are pretty good, but the best thing they’ve got going for them is the Fried Pie Company inside most of their locations. It’s a fully functioning fried pie operation pumping out dozens of fresh pies every day. In addition to various fruit and cream fillings, they also do brisket and pulled pork fried pies. Since they make them right there, you can make some pretty off-the-wall requests. A mixture of pulled pork and peach was decent, but I’d recommend brisket, blackberry, and pecan. The bonus is they’ll make it fresh, so you’ve got lunch and dessert in one fresh-fried pie. 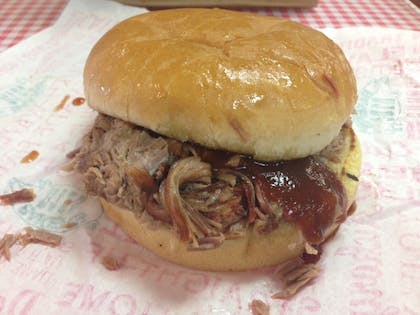 The fried pies are great at Baker’s Ribs, but the barbecue can be worth stopping for too. I prefer a chopped brisket or a pulled pork sandwich. The meat is always juicy and smoky, and the buns are buttered and grilled making for a great sandwich.

Surprisingly, there is not a barbecue billboard or sign for the final 59 miles of I-30 from Garland to the point west of Fort Worth where it disappears into I-20. 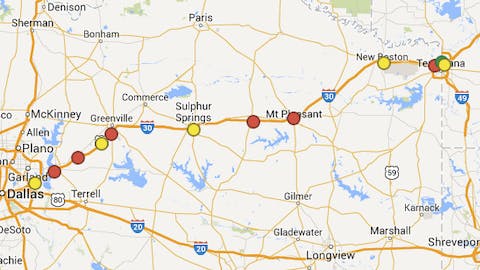 This is part of an ongoing series to try the barbecue advertised along highways across Texas. The guide for I-35 from Oklahoma to Austin is already complete. If I missed any along this route, please feel free to comment below with any omissions.