If you’ve spent any time on the interstates of Texas, then you’ve probably had a similar thought – Is that barbecue worth exiting for? You see a billboard, a collection of restaurant logos on a blue board, or a sign for BBQ right along the access road. Instincts would tell us that anyone needing a billboard might not have very good barbecue, but what if that’s not always the case? I traveled along I-35 from the Red River to Austin and tried all of the barbecue joints with one of these signs to see if they were worth your time. The Exit # is listed along with a different color in each of the listings to denote whether or not you want to heed the sign. Here’s how the colors work:

Green ♦♦♦– Exit here for barbecue, even if you have a full tank of gas
Yellow ♦♦– If you have to pee anyway, this might be a good stop
Red ♦– Keep driving 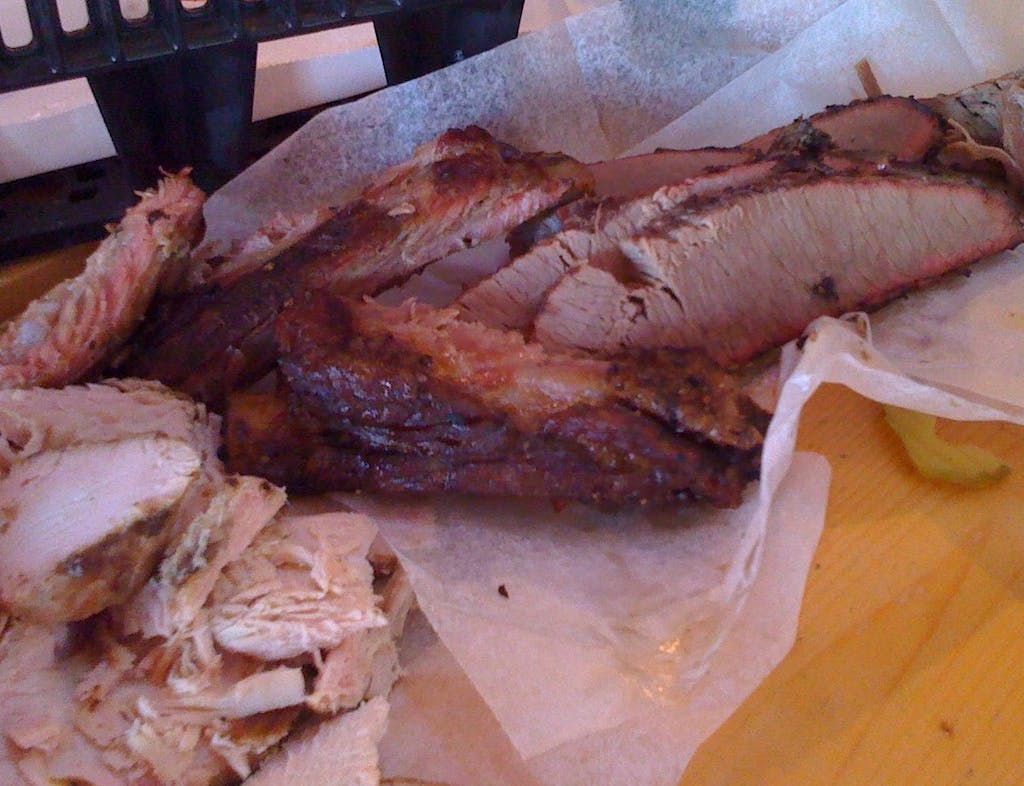 Rudy’s is a consistent chain barbecue joint. Rarely have I found it to be incredible, but there isn’t a Rudy’s location that I’ve visited that I would consider bad. This location can be tricky to get to. When traveling north there’s a big old texas U-turn required to get here. If you’re headed south you’ll need to skip over three lanes in about as many car lengths just to get in the parking lot from the exit. Inside you’ll find some decent brisket and great banana pudding. 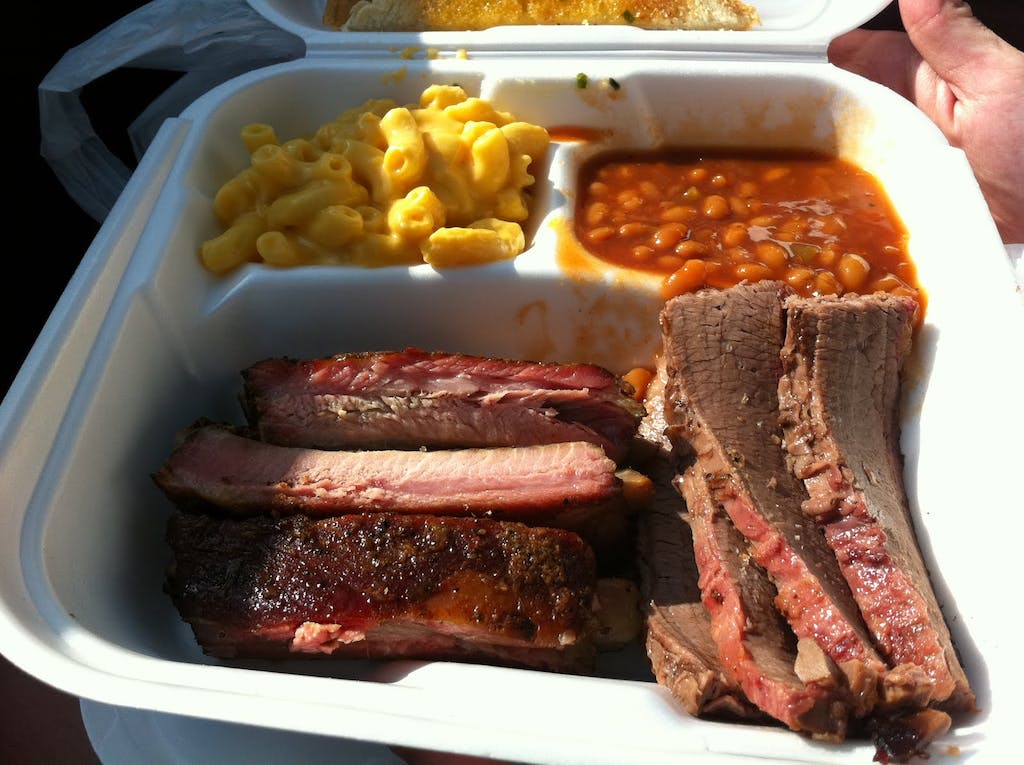 This joint bills itself as competition style barbecue, so you’ll get some sweet ribs and very lean brisket. The sliced turkey and the  sides might be the best option. 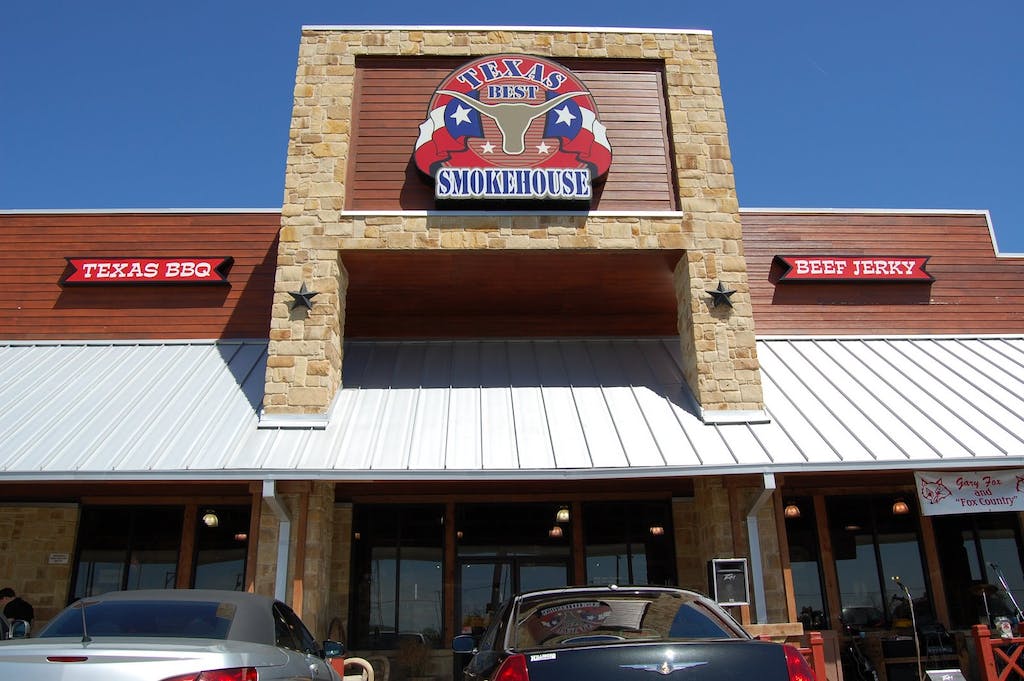 There is nothing but average barbecue to be had here, but it’ll do in a pinch. If the smoked meats don’t fill you up there’s always that enormous selection of jerkies. 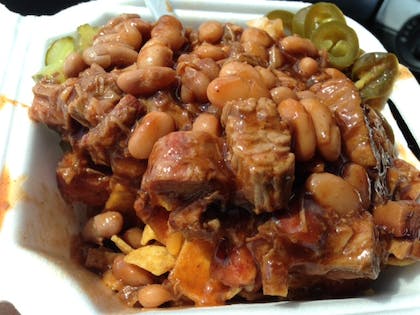 This joint is famous for the Gut Pak which piles barbecue, Fritos, beans and a few other condiments, but the hidden gem is the homemade German sausage. Don’t get the Eckrich or the commercial hot links by mistake, and don’t bother with the pork ribs that look a lot better than they taste. Also, it’s pronounced VEE-Teks. 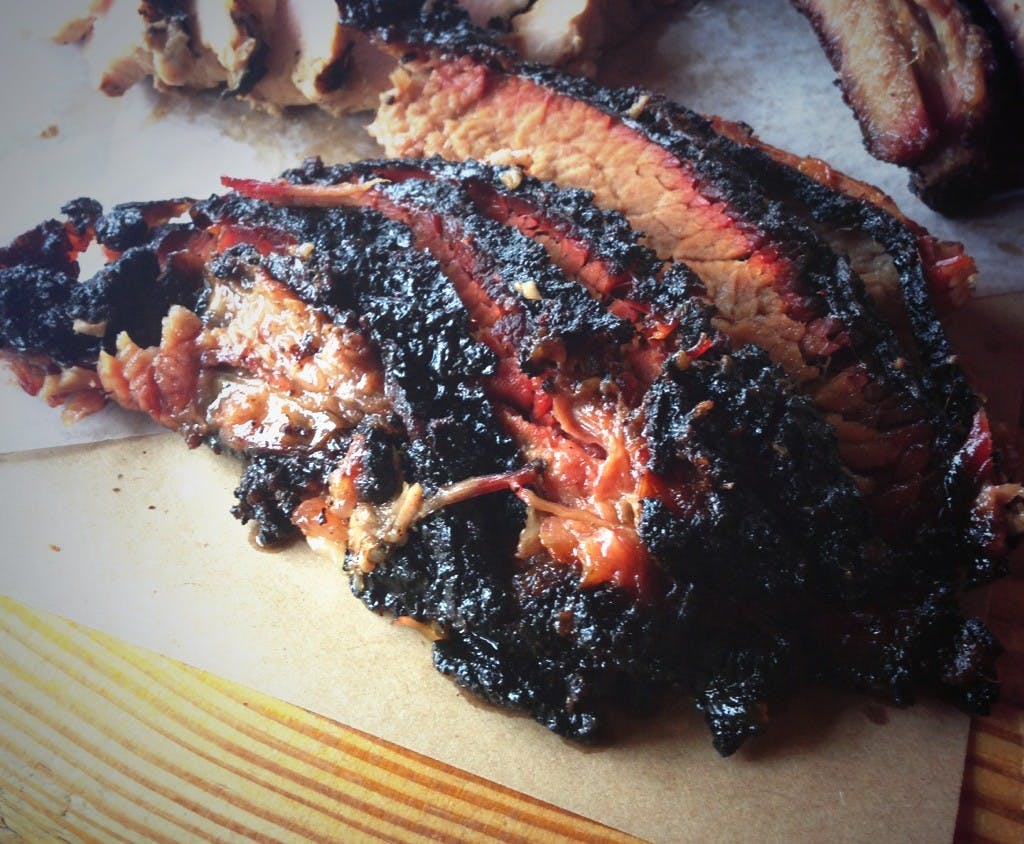 I found better brisket here than anywhere else in Waco. It was also the best Rudy’s I’ve visited. Ask for the moist brisket and tell them to get you an end cut. It will certainly take care of any barbecue cravings until you get to Austin. 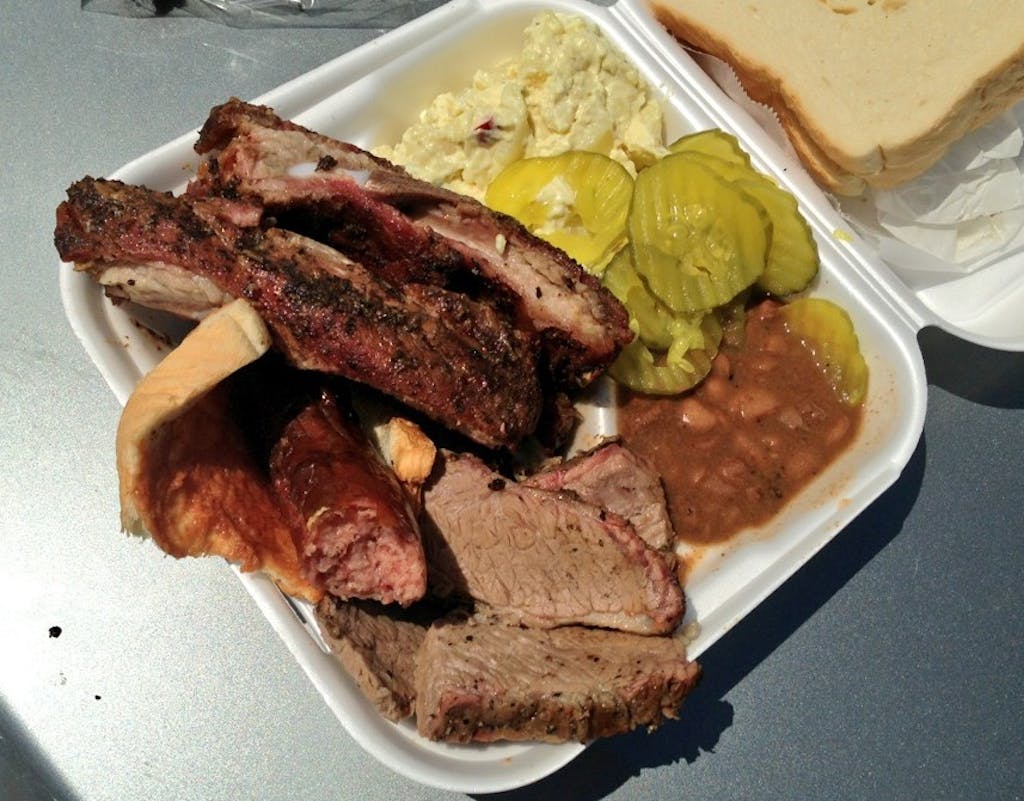 The ribs were over-seasoned and over-cooked and the brisket was chewy with a washed out flavor. A place calling itself a sausage shop was selling Slovacek’s sausage at the barbecue counter. At least the beef jerky was good. 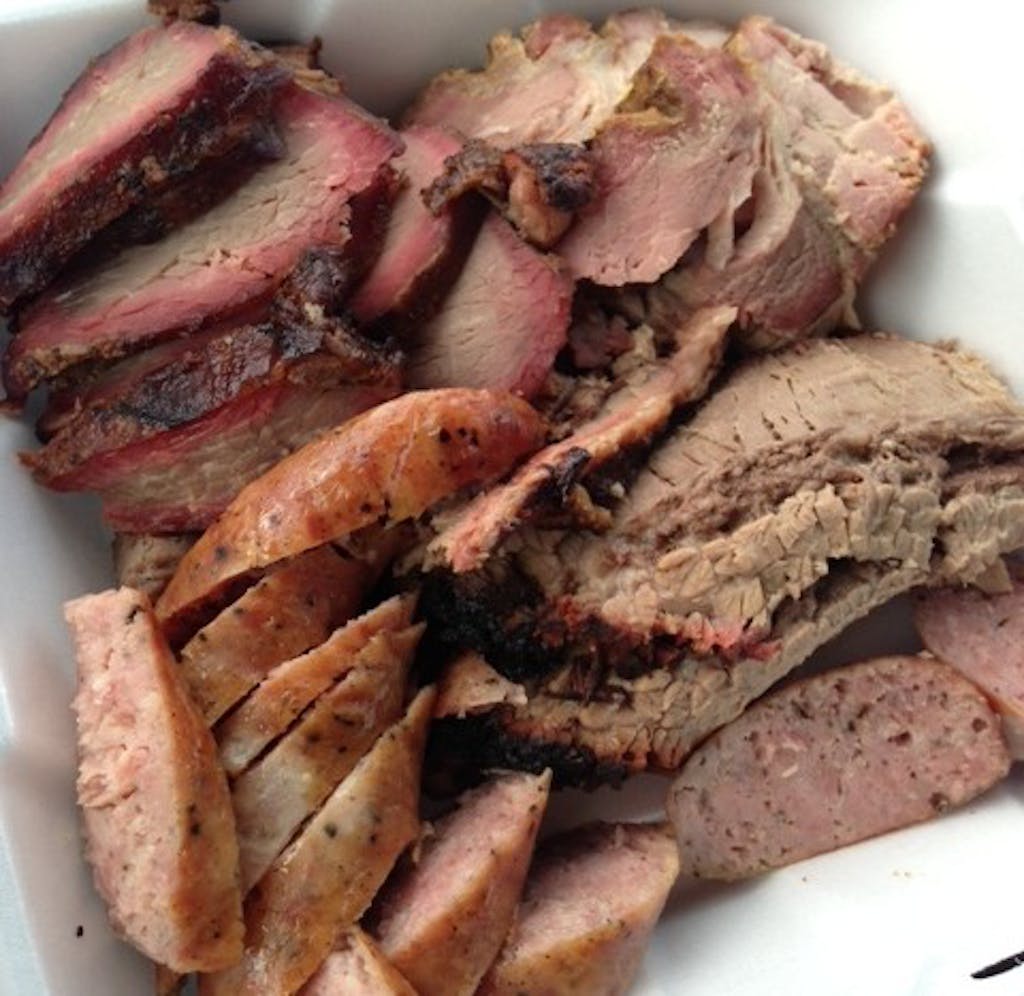 The brisket was mediocre and the sirloin was dry, but the rest was pretty good. sliced pork was smoky and flavorful while the homemade sausage was alone worth the stop. 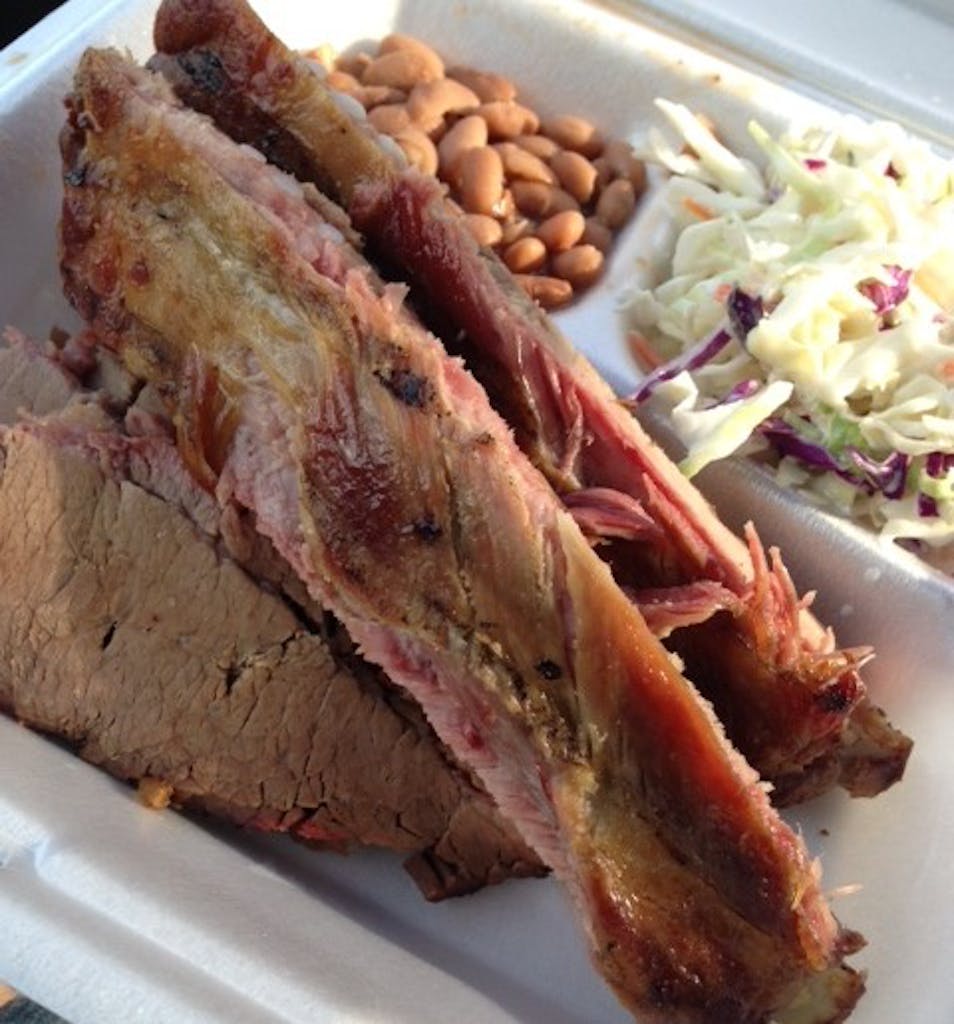 I’d noticed this building so may times, but had never heard anything good about the food. I finally stopped and found out why. They somehow sucked all the flavor out of the brisket and the ribs just tasted of roast pork. 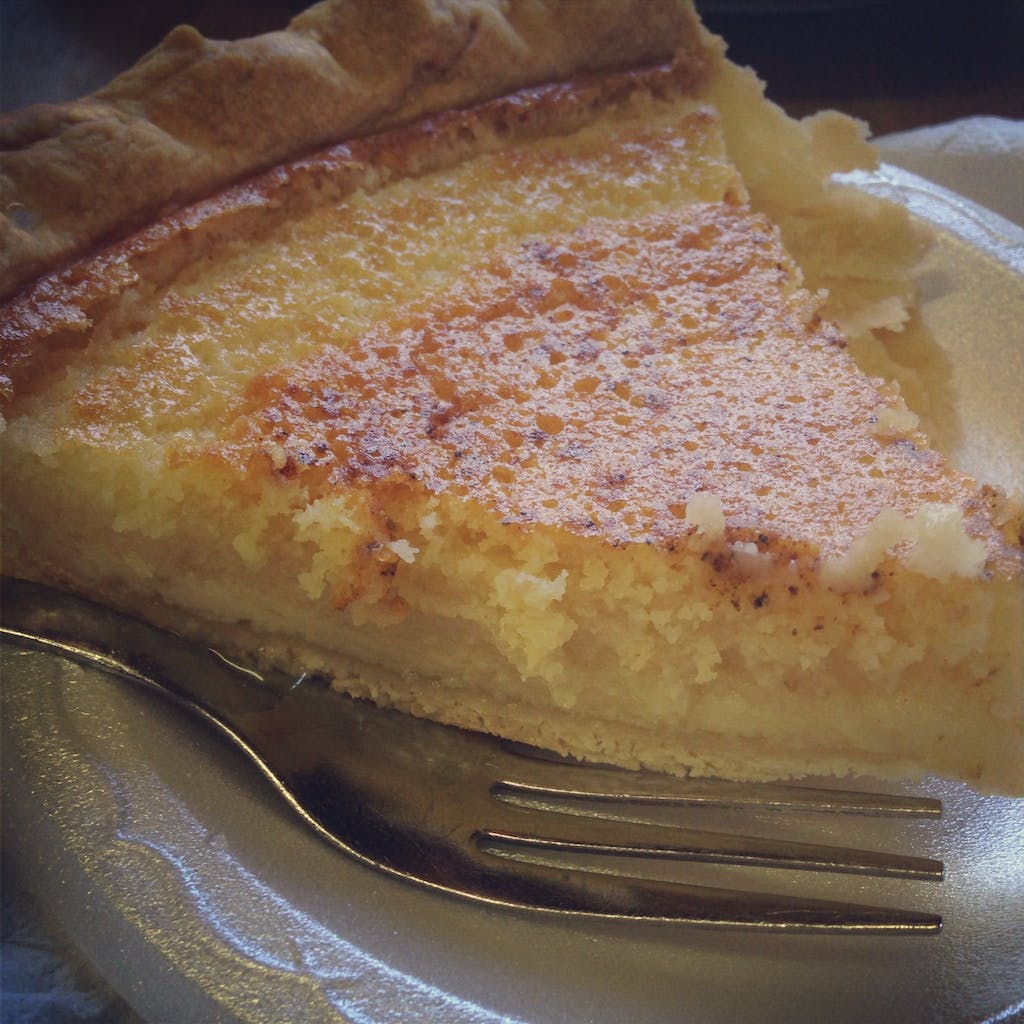 The plate of meat looked decent enough, but every bite was a disappointment. It would have all been lost until a slice of homemade buttermilk pie came to the rescue. It was some of the best I’ve eaten. 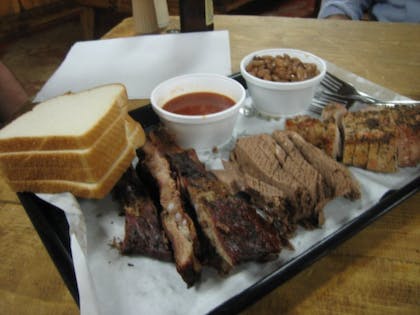 Hit them at their best around lunch time and this joint can be fantastic. Wait until 4:00 in the afternoon and expect dried out meats. Rarely does the brisket go beyond good roast beef. Instead, the best bet is the huge pork chop. Also, it’s pronounced Shuffs. 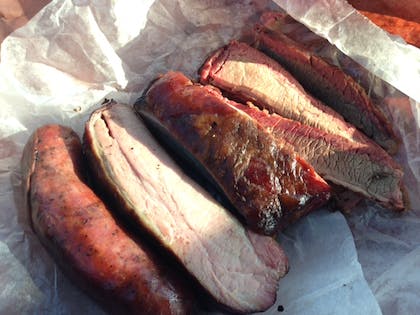 This sign popped up fairly recently, so I went through the drive-thru for an order to go. All of the meats were good, but the brisket especially was moist, tender and smoky. 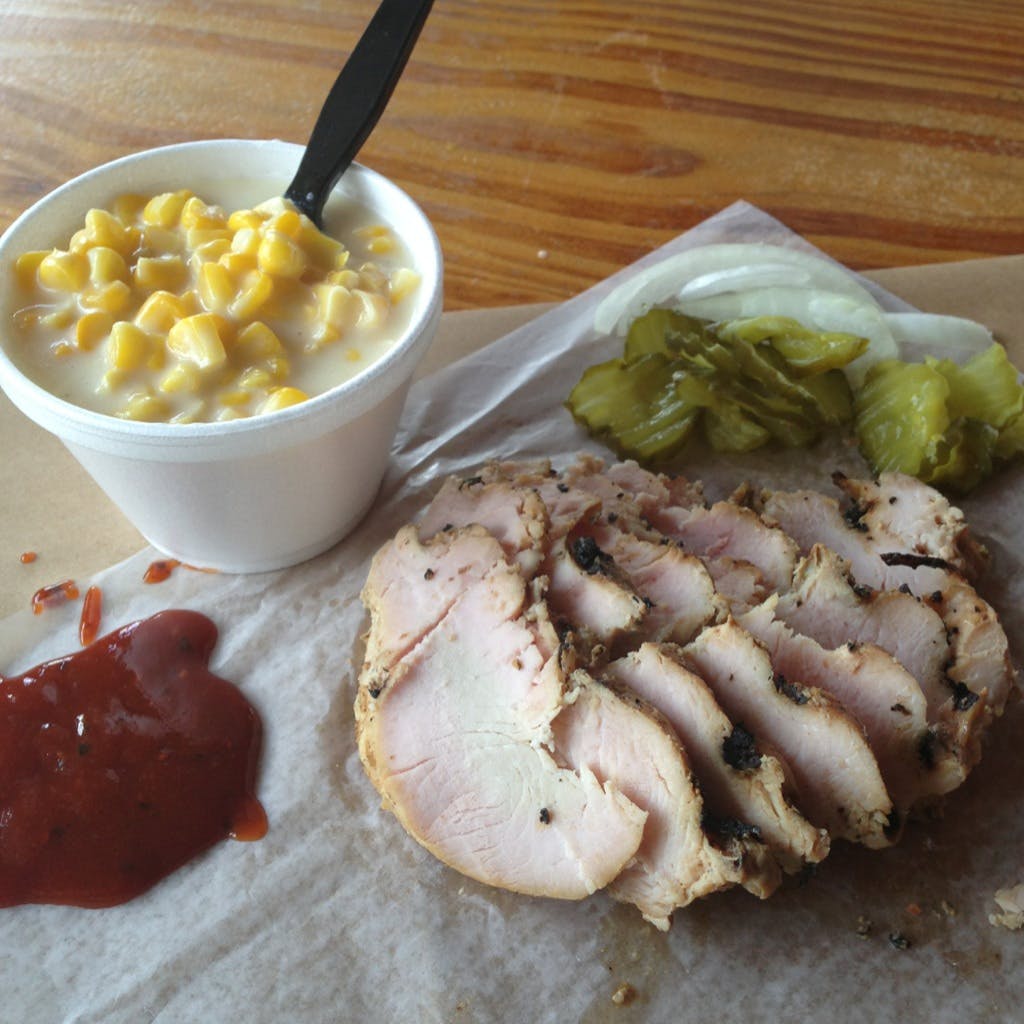 I must confess that I didn’t actually stop at this location. I can’t go to every Rudy’s, but if I did I think I’d always be happy with an order of their most excellent smoked turkey and some creamed corn. 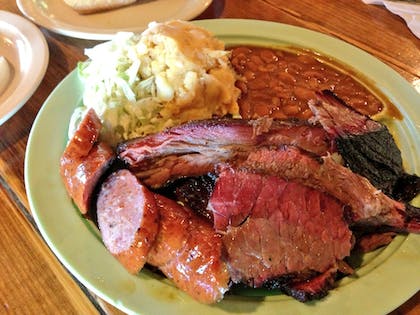 A pet peeve of mine as a highway driver is the misleading food sign. “Exit here” it says. What it fails to mention is that it’ll be another four miles until your destination. That’s the case with the Salt Lick in Round Rock where I actually turned around at one point because I was sure I’d gone too far. Nope. It’s 3.9 miles from the interstate until you can get some good pork ribs and sausage, and maybe some good brisket burnt ends. 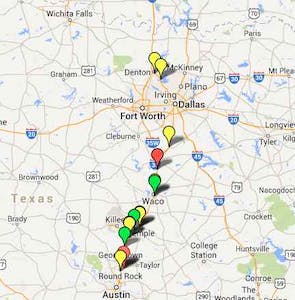 This is part of an ongoing series to try the barbecue advertised along highways across Texas. The guide for I-45 from Galveston to Dallas and I-30 from Texarkana to Ft. Worth are already complete. If I missed any along this route, please feel free to comment below with any omissions.