If you’ve spent any time on the interstates of Texas, you’ve probably seen barbecue restaurants advertised on numerous billboards, blue service signs, or obnoxiously huge structures situated along the access road. Who among hasn’t seen one of those logos and thought, is the food worth stopping for? If a place needs that much advertising, maybe the barbecue tastes terrible. Or, the food may be so good that thousands of customers stop in,  adding dollars to a huge advertising budget. In any case, to save you, dear reader, from eating terrible food, I traveled along I-45 from Galveston to Dallas and stopped in at every barbecue joint with one of these signs. Starting at Exit 0 in Galveston, I listed the places and gave them a ranking (see the color-coded key below.) Spoiler alert, there wasn’t much worth stopping for north of the Houston area:

Green ♦♦♦ — Exit here for barbecue, even if you have a full tank of gas
Yellow ♦♦ — If you have to pee anyway, this might be a good stop
Red ♦ — Keep driving 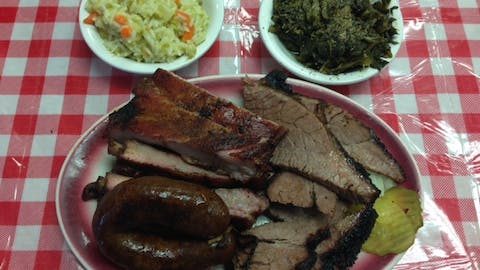 It’s located a few blocks from the official end of I-45, but we’ll give this Texas Monthly Top 50 joint a geographical pass. The fatty “Leon cut” is the only way to eat their brisket. The St. Louis cut ribs are pleasantly salty and smoky, but it’s the downtown links, made with beef and plenty of chile powder and garlic that make this joint a must stop. Don’t forget a side of the spicy rice. 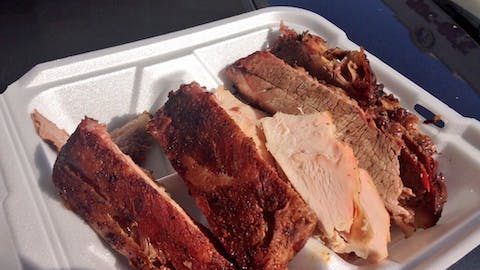 Brisket, ribs, and turkey were all bland and over-tender after having spent too much time in a warming drawer. The sides weren’t much better. 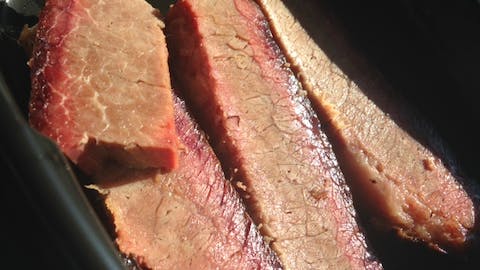 They’ll carve brisket for you right on the chopping block in the center of this massive gas station/maxi-mart, or you can opt for a pre-made sandwich in a plastic box. The uncomfortably salty sliced beef was oddly firm and crumbly at the same time. 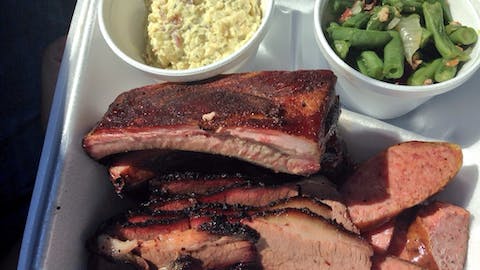 Nothing here is going to warrant a special trip from downtown Houston, but everything I tried was solid. The ribs were sweet and tender, brisket was moist and smoky, and they’ve got several options (Czech variety pictured) for well-made sausages. The only issue is that despite being listed on the exit sign, it’s about a mile and a half from the highway. 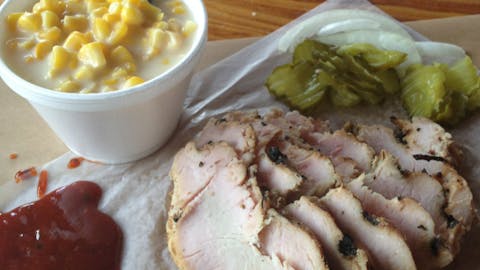 Rudy’s is a statewide chain that usually puts out decent barbecue. I’ve found the best bets to be the smoked turkey and creamed corn. It’s worth gambling on the fatty brisket too. A recent comment on Twitter put it best. “Rudy’s is a poor first choice but a great last resort.” 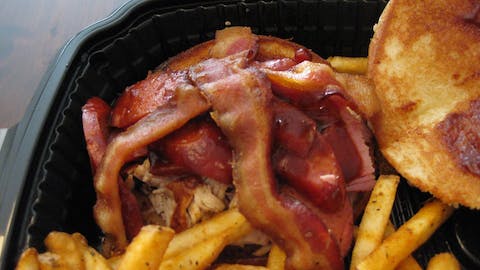 If you haven’t been to a Bone Daddy’s, expect suggestively clad young women serving passable barbecue and plenty of beer to ogling middle-aged men. The Flying Pig sandwich is a pretty good option. 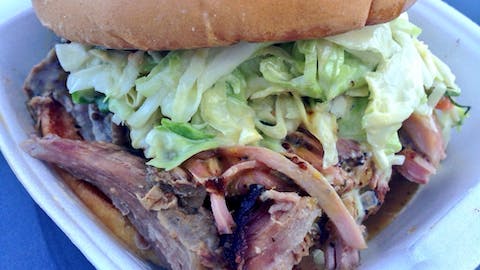 Pappas Bar-B-Q is a Houston-based chain, and you’ll have your choice of several while driving thorough the Houston area. The Sweet Caroline sandwich features a generous portion of pulled pork, slaw, and a mustard based barbecue sauce. It’s a well made sandwich that will keep you satisfied all the way to Dallas. 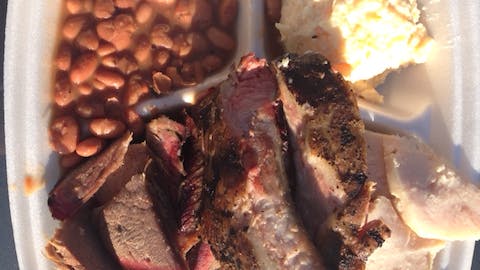 A failing strip center between a couple gentlemen’s clubs is the home of Brown Sugar’s Bar-B-Q. Serving Houston since 1975, their motto is “The smack that the others lack.” All I found were bone dry chunks of brisket, regrettable ribs, and turkey that wil have you wishing for your grade school cafeteria variety. 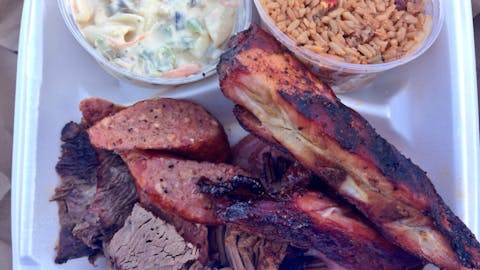 Pappas Bar-B-Q isn’t just in the sandwich game, but the ribs at this location were hard as a rock, and the brisket was overcooked mush whose flavor was long ago washed out. Instead, go for the very good beef sausage and a side of spicy rice which is akin to a smoked meat jambalaya. 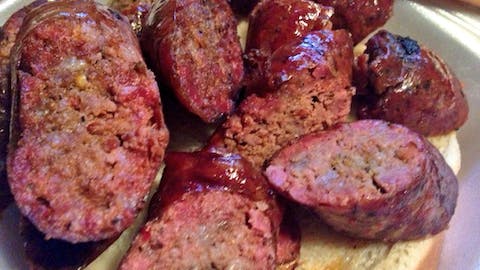 The late hours (until 10:00) and the spicy and juicy beef sausage are a couple items to like about Thomas Bar-B-Q. The other two locations in town may be better, but there wasn’t anything else worth ordering. 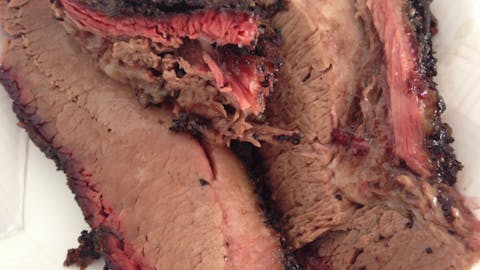 Spring Creek is a Dallas-based chain with locations all over the eastern half of Texas. They’re known for good homemade yeast rolls and efficient cafeteria-style service. Spring Creek has placed a focus on the quality of their smoked brisket recently. It’s not a world-beater, but they won’t look at you funny when you order fatty brisket anymore. 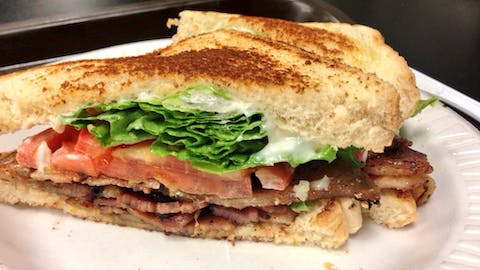 Everything about the barbecue here reminds me of the Bodacious BBQ chain in East Texas. They use the same rubs and sauces, and serve the same lean and dry brisket. One thing that sets them apart is their pit smoked bacon. Thick cut slices are seasoned and smoked. You can get it on top of a burger or as a BLT. For a dollar extra, you can also add it onto any barbecue sandwich. 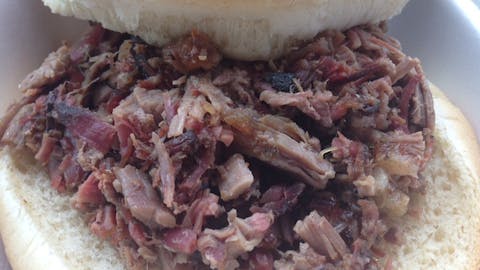 If you’ve ever tried that shredded beef jerky that comes in a mock-tobacco tin, then you know what their chopped brisket tastes like. The rib sandwich was unusual in that they removed the meat from the bones unlike most joints in Texas. Either way, the salty meat on a stale bun wasn’t worth stopping for. 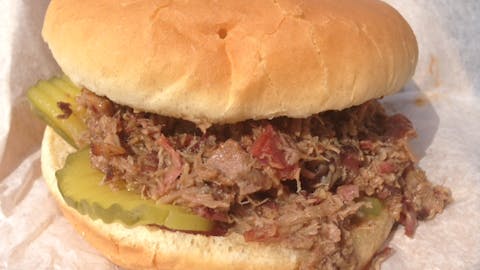 It all looked good enough when I unwrapped the chopped beef sandwich, then I took a bite. The bun was crusty and stale and the meat might as well have been cooked in the crock pot that it is stored in. 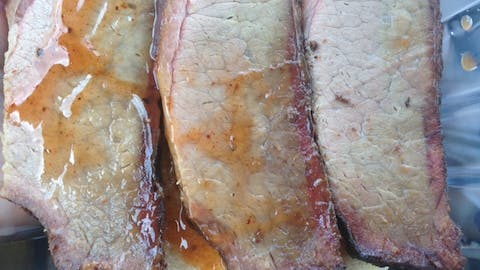 Avoid the brisket here unless you plan to consume it for comic relief. The meat is pre-sliced and stored on a steam table. That leads to petrified edges on every slice, and those are the good ones. This might be Texas’s worst sliced brisket. 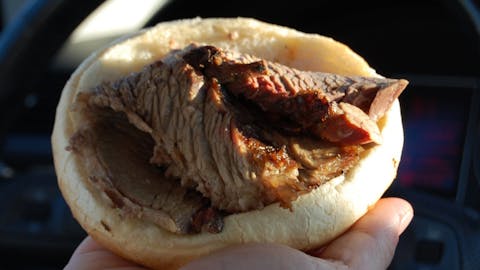 The sliced brisket here is the best at this exit, but going up against Woody’s doesn’t make it that difficult. Their chopped barbecue sandwiches will do in a pinch.

Dickey’s Would Be OK for Fast-Food BBQ If It Were 75 Percent Cheaper http://t.co/tIyotFYU via @cityofate

I’m not enough of a masochist to eat at every Dickey’s I come across, but the story above is a great piece on the sort of soulless barbecue you can routinely find there. 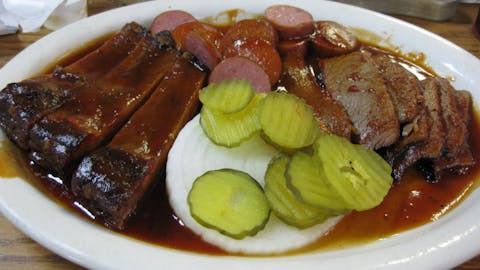 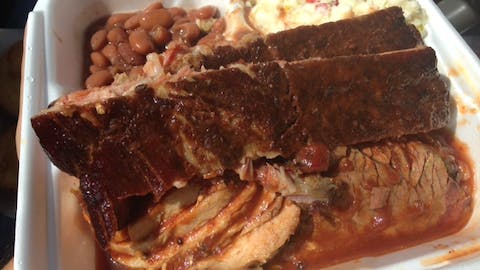 Cole’s bills itself as “real pit barbecue,” but this barbecue spent more time in the warming tray than the pit. It had formed into a single mass of saucy meat by the time I got to the car. At least the warm cornbread that comes with every barbecue plate is good. 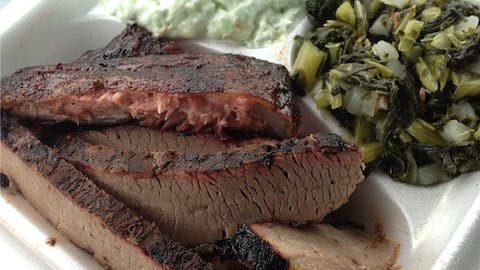 If you’re looking for great sliced brisket or ribs, then Bubba’s will be a disappointment, but they make a good chopped brisket sandwich, and steaks that you can handpick from the cooler are grilled to order. 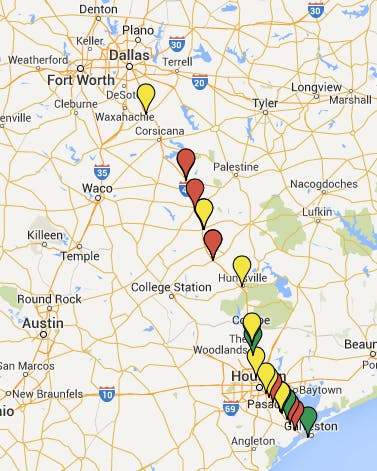 This is part of an ongoing series to try the barbecue advertised along highways across Texas. The guide for I-35 from Oklahoma to Austin and I-30 from Texarkana to Ft. Worth are already complete. If I missed any along this route, please feel free to comment below with any omissions.