Last week I spent some time in West Texas eating barbecue. I’ve done a few tours through the area already, so I know not to get excited when I see “German sausage” on a menu, but I had a temporary memory lapse. The prospect of finding a coarsely ground and smoky beef sausage was quickly dashed when a large greasy section of grocery store-grade sausage, ground to the consistency of a hot dog, sat on the plate. I asked around about how this cheap sausage came to be known as “German.” I couldn’t find an answer, so I headed to Central Texas to find the origin of what we consider to be authentic Texas-German sausage.

The rise of the Texas meat market began in the nineteenth century, as I’ve chronicled on TMBBQ before, a response to the increasing urban population’s demand for beef. Barbecue as we know it today sprung from these original meat markets. Which isn’t to say these were places dedicated to serving smoked meats, like the restaurants familiar to us now, but rather markets that extended the sales potential of their raw beef leftovers by cooking them as ready-to-eat meats. Any scraps or trimmings not cooked off as smoked cuts made their way into sausages.

Sausage even made an appearance in the earliest advertisement for barbecue, a description of a Bastrop butcher’s stall, found in the October 25, 1878 edition of the Brenham Weekly Banner.

By the 1880’s, smoked sausage could be purchased at Kemper Bros. in Fort Worth, Fritz Fisher’s in Brenham, and the competing interests of John Kohler’s and Alexander & Gill’s in Bastrop.

Many of these meat markets were run by German immigrants or those with German ancestry, people from families that migrated to Texas in the 1830s and 1840s (the Czechs wouldn’t bring their sausage traditions to this country until the early 1900s). With these families came food traditions and culture, in this case, Old World sausage skills. But not everyone was happy with this influx of German links. A disparaging report from the Dallas Daily Herald came in 1875:

“A German sausage factory has been established in Austin. It may not be amiss to remind our city authorities that this is a splendid opportunity to dispose of our surplus dog crop.”

Then in 1882, William J. Moon, the man who would make German sausage famous in Texas, started stuffing links in Elgin. When Moon began his meat delivery business, his motto was “Butcher Today, Deliver Today.” Bryan Bracewell, the current owner of Southside Market, recently described Moon’s early operation to me. “He was a small town butcher that slaughtered beef, pigs, and lamb on a piece of property about a mile outside of town,” Bracewell said. “He’d haul the fresh meat into Elgin and sell it door-to-door from a horse drawn buggy. The barbecue and sausage was just a derivative of having fresh meat and no refrigeration. If he wasn’t a good salesman that day, he had to smoke it or smell it.” 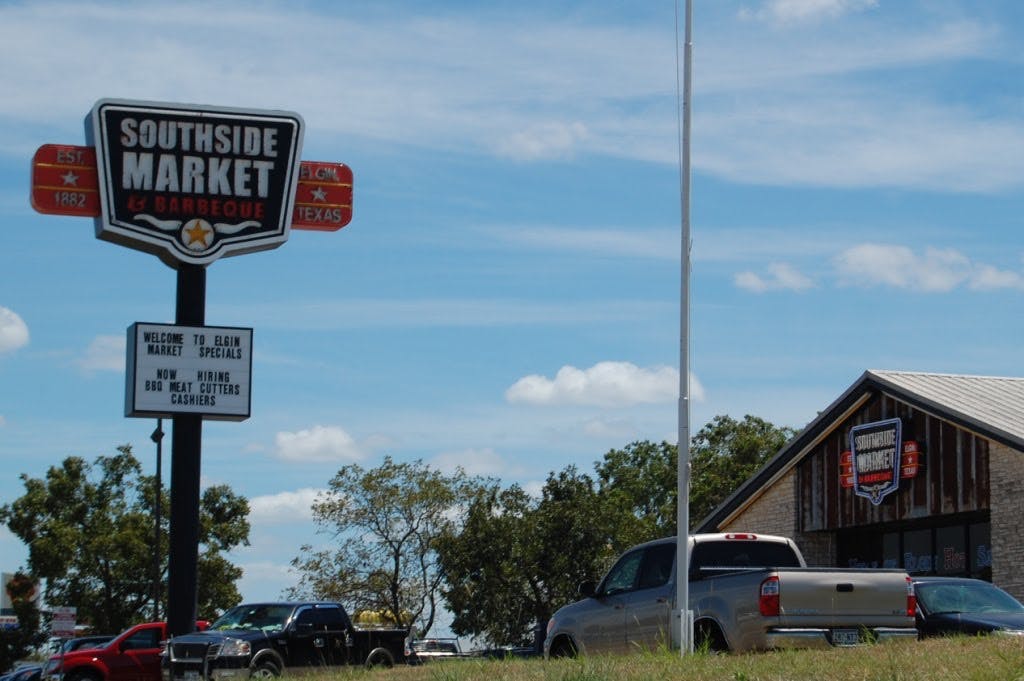 By 1886 Moon had opened a storefront in downtown Elgin, and the popularity of his spicy sausages grew, eventually earning the affectionate title of “hot guts.” Today at Southside, they use a recipe similar to Moon’s original. They’ve taken out some of the cayenne and black pepper to tone down the heat, but it’s still an all-beef sausage in pork casings. Bracewell is mum on the other ingredients, but from the ingredient list on their packaged sausage, I can tell what it doesn’t have in it: garlic.

Texas-Czech sausages all contain garlic in one form or another, but Texas-German sausages are simpler: beef (primarily) coarsely ground and seasoned with salt, black pepper, and maybe some cayenne, stuffed into natural hog casings and smoked. “It’s like a farm sausage,” Bracewell said. “Meat, salt, and black pepper. There’s nothing in there like herbs or garlic that isn’t shelf stable.”

Southside Market isn’t the only Texas-German sausage business in Elgin. R.G. Meyer opened Meyer’s Elgin Sausage in 1949, using a recipe his father Henry brought back from Germany. Meyer’s opened a restaurant in 1998, three years after Elgin was named the Sausage Capital of Texas, a designation bestowed upon the Texas Legislature in 1995.

Lockhart, the Barbecue Capital of Texas, is also home to some mighty fine Texas-German sausages. Charles Kreuz Sr. opened Kreuz Market in 1900, and the original sausage recipe is still being used today by the Schmidt family at both Kreuz Market and Smitty’s Market. It’s an 85-to-15-percent beef-to-pork ratio with salt, black pepper, and cayenne. Both joints use pork casings now, but Rick Schmidt told me they used to use beef casings. “My dad and the Kreuzes always used beef guts to make the sausage,” but the supply for beef casings dried up soon after he took over, so they made the switch to pork casings.

They also add some bull flour as a binder. Schmidt said he tried making it without the bull flour once. “When I cut into it was like hamburger meat that crumbled and all that juice just ran everywhere.” Kent Black of Black’s BBQ in Lockhart agrees. His restaurant has been serving Texas-German sausage since 1932, and it’s all about the beef. Black said that ground pork has enough of natural binding capability, but beef needs some help, and that’s where the bull flour comes in.

Don’t assume that cutting out pork means these beef sausages aren’t juicy. There’s still plenty of fat in them, and it’ll run down to your elbows if you aren’t careful. One of my favorites is in Luling at City Market where Joe Capello has been smoking them since 1962. “Now we’ve got the pork ribs, so the trimmings from the ribs go into the sausage now, which makes it about 95 percent beef and five percent pork,” Capello said. “We tell them it’s beef sausage, but it still has a little pork in it.” Buy a link or two and swipe them through their mustard barbecue sauce to experience one of the finer bites of Texas barbecue.

After asking around, nobody could tell me if there was a particular German sausage recipe that the Texas version was imitating, but Rick Schmidt recalled how he was convinced of the provenance of Kreuz Market’s recipe.

“I couldn’t answer that until about twenty years ago….A charter bus came through at the old place. It was a big group of German citizens…A lady came and asked me ‘are you the owner?’ I said ‘Yes mam.’ She said ‘I want to tell you that your sausage is the only sausage that I’ve tasted here that reminds me of my hometown.’” Schmidt asked for further explanation. “She said ‘each little town has a wurstmeister, a sausage maker, so each town has its own flavor. Your sausage tastes like my hometown.”

Schmidt said he was too stunned to ask what her hometown was, but that’s how he knows his sausage is a German sausage, and that’s good enough for me.

Other barbecue joints across Texas where you can find Texas-German sausages:

Cousin’s BBQ in Fort Worth

Lockhart Smokehouse in Dallas and Plano (From Kreuz Market in Lockhart)

Stiles Switch in Austin (From Thorndale Meat Market in Thorndale)