After a culinary education at Texas State Technical College and several years working at Uncle Dan’s, a barbecue joint in Waco, David Gorham was ready to branch out on his own. Gorham and his father, John, partnered up in 2015 to open Honky Tonk Kid BBQ, a food trailer in Waco the two planned to run as a team. But a month after opening, David’s father passed away. “It was a lot for me to take on,” Gorham said, so he shuttered the truck to travel and clear his head. After trips to Australia and beyond, he returned to Waco and reopened the trailer last October, this time bringing some of the flavors from his travels along with him. 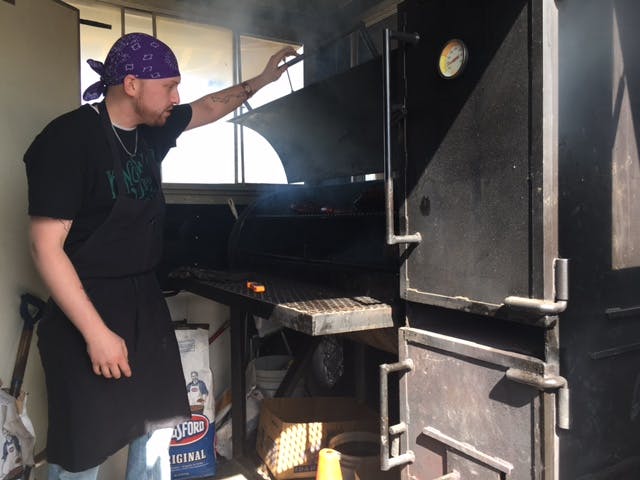 The Honky Tonk Kid serves what he calls “global fusion” barbecue, but ultimately Gorham’s goal is to be cooking Texas barbecue with a twist. Still, the concept keeps some folks away. “I see people drive up to read the menu, then drive away,” Gorham tells me from his food truck parked in front of Waco’s Vegas Buffet.

Admittedly, I didn’t know what to expect either. Would it be Japanese izakaya one week and Brazilian churrasco the next? Well, no. Every month the barbecue truck marries a different culinary tradition to traditional Texas-style barbecue methods. And to those folks driving away, I’ll say they’re missing some of the best barbecue in town. 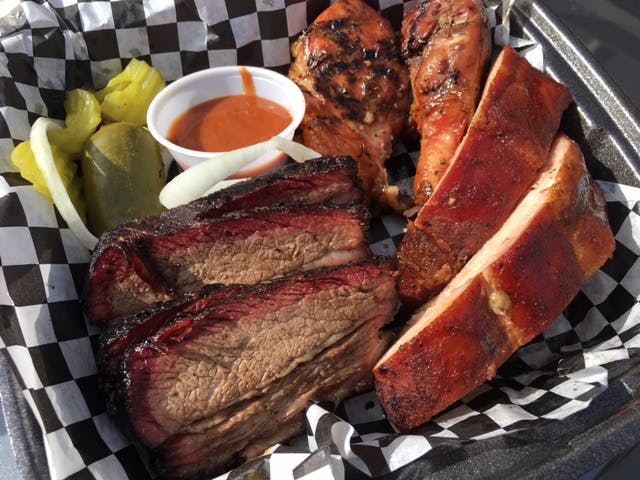 My first visit was late last month during the Hawaiian fusion phase. This is Texas, so Gorham always keeps brisket on the menu, but the seasoning and the wood will change based on the theme. For his Hawaiian version, Gorham had ordered black lava salt and sea salt from the island state for the rub, which helped form a jet-black bark. The trailer-mounted smoker was filled with mesquite and hickory. Mesquite, the cousin of Hawaiian kiawe wood, seemed appropriate, and the smoke flavor was great. This was excellent smoked brisket, a rarity in Waco, although the prime beef could have been a touch more tender.

The only items that don’t change on the menu are the baby back ribs and the smoked sausage. While Italian sausages will hit the smoker this week during Italian month, a locally made Holy Smoked beef and pork sausage is always on the pit. The baby backs were great on two different visits. They’re tender with a sweet agave glaze and just enough smoke. Gorham said these were a favorite of his late father, so the recipe won’t change.

1701 Barbecue Began as a Mortician’s Side Hustle. It’s Now One of the Most Popular Joints in Town.

A Second Feges BBQ Location Serves Up Stunning Sides and Meat With, Yes, a Glass of Wine

Barbacoa Tacos and Mollejas Shine at Avila’s BBQ in Hebbronville 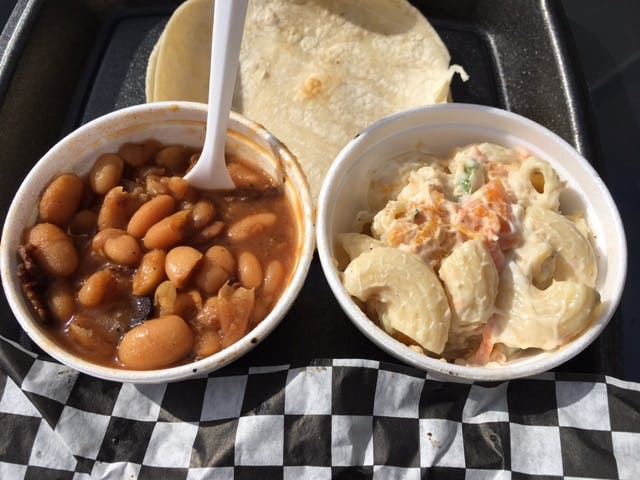 The macaroni salad was a good rendition of the favorite Hawaiian side dish, and the bold move of adding diced sweet potatoes (carb-on-carb action) actually worked. A less creative move was adding canned pineapple in the pinto beans for a flavor of the islands, but if Two Bros. BBQ in San Antonio can add peaches, why not another fruit?

February arrived, and I traveled to Waco again in anticipation of the herb-rubbed beef short ribs for Italian-fusion month. By the time I made it down, they’d been replaced. Gorham smoked four racks of beef ribs the week before—a total of twelve ribs—and sold only three of them. The frugal Waco customers balked at the price, so he ate a lot of beef ribs that week. When I arrived, smoked meatballs were on the menu. Gorham blends applewood smoked bacon with ground chuck and ground pork, then smoked them for about an hour. This quick-hit smoking allows the small trailer (he smokes just two to three briskets a day for now) to have a feature item that he can quickly smoke in case it gets popular, as the meatballs did last Friday, and for good reason. Covered in tomato sauce and shredded mozzarella, three meatballs were served inside buttered Italian bread. It might not elicit a bellissimo from an Italian grandmother, it was a welcome change of pace and a plenty satisfying lunch. 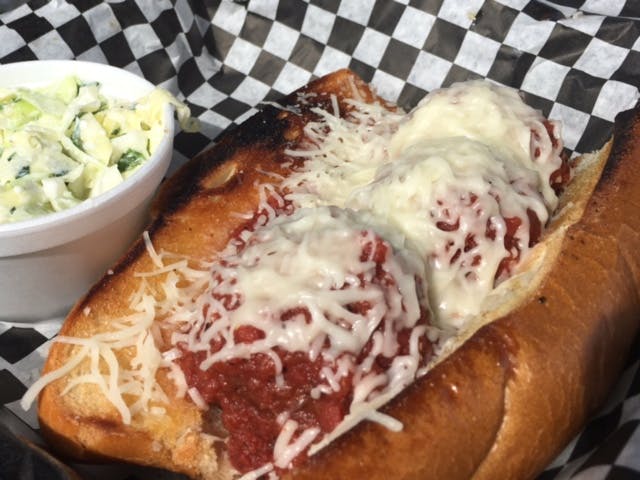 The “Italian” brisket was rubbed with garlic and three kinds of pepper. “We kinda went with the Italian flag” mixing pink, white, and green peppercorns, Gorham explained. This time the fatty brisket was noticeably better than the lean, which was a bit dry. It was still a solid smoked brisket. And a crisp herbaceous slaw was a fresh and crunchy counterpoint. As for the beans, I’d have been impressed with Tuscan-style cannellini beans over the clunky “fusion” of pinto beans and Italian herbs. 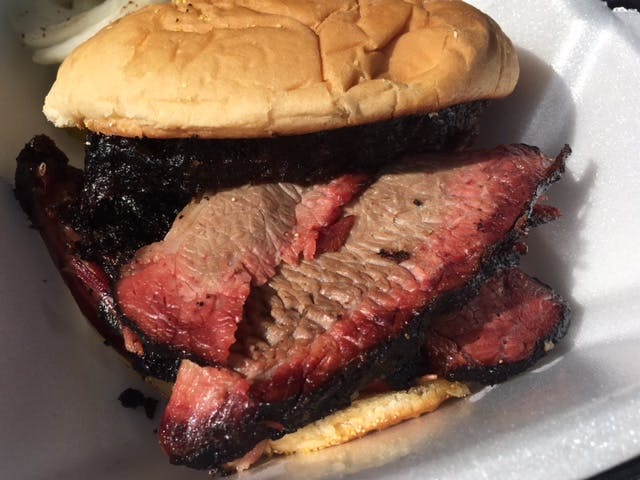 A bone-in chicken thigh had tough skin and needed more time in the smoker. I preferred the sweet chicken legs from the first visit. Pulled pork had great smokiness, but was dry and needed a dunk in the sauce. That said, I think Gorham might do himself a favor and pare down the options. Juggling five different proteins and a mess of meatballs on the pit can’t be easy to pull off, especially for a crew of exactly one. Barbecue is challenging enough, so I asked Gorham why he changes up nearly the whole menu every month. “I get tired of eating the same thing,” was his simple answer. I can relate. I eat a lot of barbecue, but I get to sample different styles of barbecue at every stop. Most pitmasters have to eat the exact same barbecue every day, but not Gorham.

Honky Tonk Kid BBQ is now open three days a week, Wednesday through Friday for lunch, so you have to plan ahead for the best brisket in town. If business picks up, Gorham says he’ll add Saturday service. There are only two weeks left for the smoked meatballs. March brings with it some barbecue that I haven’t even tried. “We’re gonna get kangaroo,” Gorham promised as he perused a price list from his meat supplier. Australia month is just around the corner, and I might just call to reserve a smoked leg of kangaroo.