Israel “Pody” Campos doesn’t want to send his mother to the unemployment line, or his wife or daughter for that matter. The owner of the family-run Pody’s BBQ, in Pecos, has seen his share of West Texas busts, but none like this one. “It’s a double whammy,” he said, as we watched the price of oil plummet from either end of a phone line. But what about the infamous bust of the mid-eighties that turned downtown Midland into a ghost town? “That boom wasn’t as big, so the bust wasn’t felt like this one,” Campos said.

Pody’s BBQ opened in 2011, after the 2008 market crash, and except for a few blips in the local economy Campos has operated only in boom times. Pody’s has also enjoyed the boom in Texas barbecue’s popularity, which has beckoned plenty of travelers along Interstate 20 to stop in Pecos. But, by far, it was the rush of oil workers to the region that really built up the business. A few years ago, Campos hired his wife, Veronica, and his mother, Margaret Franco, to help him run the place while he worked in the Reeves County sheriff’s department (he’s now a Reeves County commissioner). It was just a small lunch operation at first, but then all the newly arriving oil workers seemed to want barbecue. Campos added more pit capacity and expanded his hours. When I visited in 2017, the gravel lot was packed with pickup trucks, and there was a line waiting for the door to open at 11 a.m. The first few customers bought a good chunk of that day’s barbecue to take back to the oil fields.

Last year, Campos noticed that his business was starting to dip; it has been on a “slow and sure decline” since June, he said. His daily catering orders dropped from three or four jobs to two jobs, then one, and then declined to one every other day. “Even before the virus hit, we were like at 50 percent [revenue], maybe less,” Campos said. He said growing up in the Permian Basin teaches you to ride the wave of the economy and expect it to crash. “It was good while it was going, and they were making their money. And now they’re gone,” he said of the oil workers. For this current oil crash, he’s better prepared. “Luckily, we saved up a little during that [good] time. We learned from the eighties,” he said. Instead of buying a new truck or a bigger house, he put his earnings into savings and into buying the building that houses Pody’s BBQ.

Last year’s struggles pale in comparison to the effects of the pandemic. Campos said he’s bringing in about 15 percent of the revenue he enjoyed at this time last year. That’s still enough work to keep his mother and wife employed, although their pay and hours have been reduced. Verenice, his daughter, is a senior in high school who will graduate near the top of her class, he said, and she’s working at the restaurant too. Like the entire 2020 class in Texas, she won’t have a graduation ceremony. “We get kinda like a triple whammy because we won’t see her walk and we don’t get to see her graduate,” Campos said.

He applied for a loan through the SBA’s Paycheck Protection Program, which would have provided some funding for the restaurant’s payroll. The government program was set up to provide some relief to small businesses, but it ran out of money last week before many received their loans. Campos’s small, local bank wasn’t SBA-approved, but it accepted his loan application while it completed its own paperwork to get approved. “By the time all that got done, the money was gone, and that would have helped us out a whole lot,” he said. He added, “It kinda gave false hope to a lot of folks.” The program is expected this week to get a second round of funding of about $310 billion; about $60 billion of that money is supposed to go to lenders that serve small businesses.

Pody’s BBQ has had to adapt in other ways. Campos has cut his hours to just lunch Wednesday through Friday, and he has added some specials to the menu to keep the locals interested. His mother has a recipe for fried catfish nuggets that has been popular, and he’s been cooking big batches of carne guisada. The half-pound pulled-pork sandwiches that used to sell for $8.50 are now $5, and Pody’s will deliver them for free in Pecos if you order at least three sandwiches; Campos admitted that Pody’s doesn’t make a profit on the sandwiches even before delivery. He said he feels like it’s his duty to feed his community, noting that he’s seeing a lot of old faces for the first time in a long time. Those long lines of oil field workers kept some locals away for a few years.

At the peak of the boom, Campos was smoking forty briskets a day. Now he’s down to nine. He joked that it doesn’t take any less time to cook nine than it does forty. “We use the same amount of fire for it.” He’s selling out of barbecue every day but is afraid to add more brisket to the pits because not selling them would be really painful. The problem lately has become getting his regular brisket order. Campos said his Monday delivery from US Foods didn’t have any of the brisket he ordered and it had only one of the five pork shoulder boxes he was expecting. A company rep told him, “Literally all of our fridges are empty.” Another delivery is coming this week without any guarantee of briskets. Campos is already scheming to buy them locally at Sam’s Club and H-E-B just so he can get them on the smoker. “They have a limit on two briskets per person, so I might have to take my whole family,” he said. At least now they won’t have to wait in hour-long lines to check out, like during the height of the boom.

I was amazed at the sense of humor Campos maintained during our conversation. He said that without it he would go crazy. He sees his fellow Texas barbecue-joint owners in the big cities struggling to stay open, but he’s holding out hope that an end to the pandemic will bring back some normalcy. “We don’t know what the end holds for us,” he said. As we both watched the price of West Texas crude oil dip into negative territory for the first time in history, he noted that even the end of the pandemic won’t magically provide another oil boom for the local economy. “What do we have to look forward to?”

Campos isn’t planning to give up, no matter the circumstances. “We’ll be here. It might be Pody’s Taco Place,” he suggested, or maybe it will go back to the laundromat that was housed in the building before it was a barbecue joint. “Barbecue in the back and laundry in the front,” Campos joked, or maybe a barbershop. He gave his son a successful haircut over the weekend while watching protestors at various state capitol buildings complain about not being able to get their nails done or visit their barber. “It’s like a slap in the face to us who are really going through some crap,” he said, noting that West Texans are a more resilient bunch than most thanks to the hardships they endure through every bust. “We can adapt and go on,” Campos said. He added that he and his family were thankful to have their health and a business that’s still operating. “As long as the bills are paid and we can keep the lights on,” he said, “we’ll be able to truck on.” 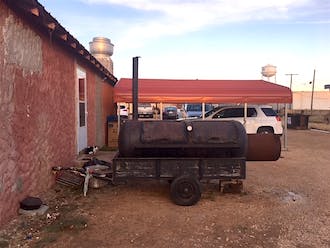 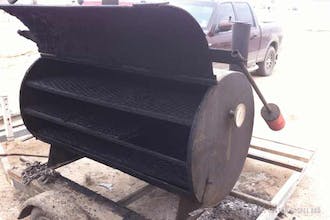