Hitting the barbecue trail in Texas is something of a weekend sport. Plenty of people create their own routes, but one of the more official itineraries—the Texas Barbecue Trail, which takes you from Taylor to Elgin, Lockhart, and finally through Luling—is enormously popular. As the name suggests it’s a great introduction to Texas barbecue, and a visit to all of those towns guarantees a stellar food experience. The one drawback? It only covers Central Texas. What about the other barbecue regions of our great state?

There are plenty of other clusters to visit. Like the southeast corner of Texas, where beef links trump brisket for importance, and pork necks and smoked boudin are just as common as ribs. I’ve written about these beef links before, but mostly individually. After a recent trip through Port Arthur I realized that SETX deserves its very own barbecue trail centered around its signature dish: the smoked beef link.

The all-beef link as we know it in Texas was developed, as best anyone can tell, in Beaumont. Unlike most Texas sausages, this one uses a beef casing instead of pork, and it includes 100-percent beef in the filling. Even the beefiest links of Central Texas include a bit of pork or pork fat to help bind the sausage. These SETX links are also highly spiced with garlic, chile powder, paprika, and sometimes cumin. The fat runs red, and given that there’s plenty of it, these links definitely deserve their nickname “grease balls.” I prefer to think of them as juicy.

The most well-known joint to get them is Patillo’s Bar-B-Que in Beaumont. Robert Patillo uses the same recipe his great-grandparents Jack and Roxie Patillo developed in 1912 when they first began selling them. Beef casings are cut to length, then stuffed individually with seasoned, ground brisket. They do this 500 times every other day, so it’s safe to say they’re popular. They’re also my personal favorite in Beaumont.

Just down the street is Gerard’s Bar-B-Que where Joseph Gerard first started making links in 1970. He got some tips from Frank “Jack Jr.” Patillo (Robert’s grandfather) along the way to arrive at the current recipe. They’re a little looser than Patillo’s, but still with great flavor. When Joseph passed away, his son George started running the place. When asked about the beefiness of the links says “The only thing that’s not beef on the link is the string.” Last time I visited, his mother Marie was stuffing links back in the kitchen. Handmade is the only way to get these beef links right.

Broussard’s Ribs + Links (notice that brisket is the undercard in these parts) is the newest of the trio. Opening in 1993 (though founder Leonard Broussard had been making links since a couple decades before), they quickly became known for their links. Their recipe has shifted with the times to reflect local tastes. The first time I tried them was three years ago when they were relatively lean. You could even bite through the casings. On the last two visits it seems they’ve reverted back to the juicy recipe. That also means that the casing must be broken open to release the filling, or you can squeeze them out like a link of boudin. I like to catch the drippings and the meat on a slice of white bread and eat it like a foldover sandwich.

Twenty minutes down the road in Port Arthur, they’ve also got a cluster of beef link joints. You’ll find the best of the bunch at Nick’s Bar-B-Que which was opened in 1974 by James and Barbara Nicholas. James passed away several years ago, but Barbara remains with some help from her daughter Stephanie. Longtime pitmaster Floyd feeds red oak into the old brick pit now, and he says they stuff 300 pounds worth of links every week. Like Patillo’s, they use all brisket.

The sausages at Nick’s are less fatty. The meat is more cohesive, but it’s still a very coarse grind. The garlic and spices are bold, and the layers of flavor just keep coming. This was a link I could eat every day and find a new flavor every time.

The business cards at Nick’s have “Land of Links” printed next to their name showing their awareness of the culinary context in which they reside. Two other joints, Comeaux’s and Jaws Bar-B-Que II both specialize in the same style links, but both are a bit looser and fattier. When I bit into the link at Jaw’s I thought of the cheese-stuffed burger called a “Juicy Lucy.” Those links are just the reverse – Loosy Juicys.

Comeaux’s opened sometime in the late eighties. Mr. Comeaux (I honestly don’t know his first name, and everyone calls him that) has been ill lately, and his tiny joint on Bluebonnet Avenue was open only in the evenings last time I was in town.

Seventy-one year old Punarbassi Sandy, who goes by Miss Sandy, runs Jaws Bar-B-Q II alone. She and her husband learned how to make these links from Nick’s after the moved from Guyana a few decades ago. When their planned employment fell through, they decided to open a restaurant, and eventually settled on barbecue. Open since 1981, it’s no upstart, and Miss Sandy shows no signs of slowing down.

Further afield, these beef links start to morph a bit. They use a pork casing at Leon’s in Galveston where the menu refers to them as Downtown Links. The same happens in Houston at joints like Powell Bar-B-Que, Pappa’s, and Byron’s. All of them make a good, homemade link, but they are an homage to deep SETX rather than a replication. And they’ll all tell you where this style of link was born – Beaumont. Leonard O,Neal told me in an interview “It developed out of the Beaumont area. I picked up on it. I got a recipe and then made it better. I perfected it.” He then listed his ingredients. “They have crushed red pepper, garlic, onion, salt, chile powder…fresh garlic is key.”

In 2000, Robb Walsh wrote The Art of Smoke for the Houston Press and interviewed legendary Houston barbecue man Harry Green for the story. Green credited Matt Garner who hailed from Beaumont for bringing the links to Houston:

“Matt was the oldest around here. He came from Beaumont, must have been in the 1920s. …Matt Garner made the first beef links around here, and he passed it on to Joe Burney. And Joe passed it on to me. It’s still a big part of black people’s barbecue.”

I’m not sure if Garner made the switch to pork casings, or if that came later down the line. Either way, nobody in Beaumont or Port Arthur has made the switch. Neither has George “Billy” Mahathay. He’s the owner and pitmaster of Billy’s Old Fashion BBQ in Jasper, and he makes a similar beef link with a beef casing. He’s not sure where the recipe hails from since he learned it from his aunt who was born and raised in Jasper. Whether or not it came from Beaumont, it’s still a tasty link.

With a detour to Beaumont and Port Arthur, about three hours of driving separate Jasper from Galveston making this trail a convenient one in terms of distance, then hit Houston on the second day. It’s also an easy one on the wallet. Most of these links will run you less than $5, and the method of consumption makes them easy to split. You might not find great brisket, but you can save that for your next trip to Austin. This is Southeast Texas, home of the beef link trail. 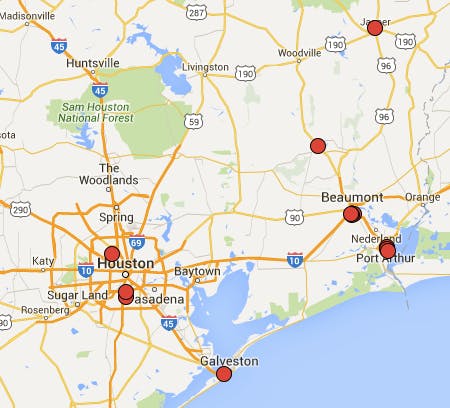