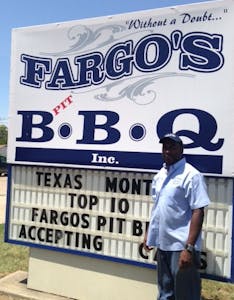 Wood: Oak with a bit more mixed in

As we sat at a table inside Fargo’s Pit BBQ in Bryan, I asked owner and pitmaster Alan Caldwell if I could see his pit. He said no. In total I probably asked in varying forms another twenty-eight times, but the answer was always the same. I won’t print the entire exchange for your benefit. Alan has assured me in the past that there is no gas cooking going on here. He says he cooks with all wood. The surveillance videos I took over the brick walls surrounding the pit area don’t show much of the pit, but it sure looks like a stick burner. Maybe next time I’ll get to see it and learn a bit more about this secretive man’s methods, but for now we just have to glean what we can from his answers.

DV: Do you have them lining up outside before you open?

DV: And how quickly in the barbecue gone?

AC: It’s gone by about 2:30, but we cook more during the day, so we have to shut down for an hour or so and reopen around 4:00 for dinner. That lasts for about two hours, then we go home.

DV: What do you get to do on your days off?

AC: Run down supplies and cook.

DV: So you don’t really have a day off.

AC: No. On Sundays we try to get to church early, then we go get supplies. On Monday there are more supplies to pick up, then we fire that pit up.

DV: Tell me more about that pit.

AC: [Laughing, or should I say cackling] I’ve got nothing to tell.

DV: Can you tell me where you got it?

AC: I had it built back when we had the old place. A guy out of Fort Worth named Tiny Tim built it. [I have no idea if he’s joking]

DV: You talked about the old place. When did that open?

AC: In 2000. For twelve years we were up the street before moving into this building in January.

DV: How big was that place?

DV: I hope rent was cheap.

DV: I guess you didn’t have a dining room there.

AC: We tried, but that left us without any elbow room, so we had to take the tables out. It was to-go only.

DV: Where did you learn how to barbecue?

AC: I guess it was from watching my grandfather. Back in the day we didn’t have these fancy pits. We had to make do with what we had. My grandfather made a pit out of an old refrigerator. He gutted it out, laid it on its back and put a few racks in it. I had to watch how it was done. It stayed around the house so I started messing with it. I started cooking and thought to myself, well if I can cook on a refrigerator…

DV: Was he using it like grill for direct heat?

AC: It was indirect. He had a fire box. That’s the only way I’ve ever known. I don’t get this charcoal stuff. If you want charcoal, make your own. Burn some wood and scoop it up under there.

DV: Where did those cookouts happen?

AC: In the backyard right here in Bryan.

DV: So you’re form this area?

AC: I’m from right here. This is my four block area right here [pointing to the blocks surrounding us]. This is where I grew up.

DV: Do you have old classmates and family coming in here to eat?

AC: All the time. We’ve also got lots of family here.

DV: Did your parents do any barbecue, or did it just pass to you from your grandfather?

AC: It was passed to me, and to my brothers. One of them is in Hobart, Oklahoma about to open a Kansas City style place there. It’s going to be called Frisco Creek. He said his place will be the next one that you’ll be talking about.

DV: Where di the name Fargo’s come from?

AC: Belender’s [Alan’s business partner] last name is Wells. Her father had a place in California. He liked how the names Wells and Fargo went together, so he named his place Fargo’s. When we decided to open up in 2000 we called to ask if we could use the name. He said “Cool. No problem. I’d love for you all to have it.”

DV: Is he still running his place in California now?

DV: The barbecue business is a hard one.

AC: Oh yes. It might look easy, but there’s nothing easy about it.

DV: You said your brother is doing Kansas City style. What style do you consider your barbecue?

DV: What does Texas Style mean to you?

AC: Cooking on a smoker is fine, but the real Texas style is cooked on a brick pit.

DV: Did you go to any of those brick pit joints when you were growing up?

AC: No. We ate what we ate home. My grandfather also had a small brick pit. We both liked to cook on that, but there got to be a bunch of us. We needed to cook more food, so that’s why he built the refrigerator pit. My brother came down one time and I let him cook on the refrigerator. I left for the store, but when we were coming back you could see big clouds of smoke coming up. We were like “Oh s—, it’s on fire.” I asked him what happened, and he said something about how I was messing with the pit before I left. To this day he blames me for that, but I was at the store.

DV: Was that smoker a goner after that?

DV: Did you have a big family?

AC: There were eight of us. Seven brothers and sisters and me.

DV: What were you cooking back then? 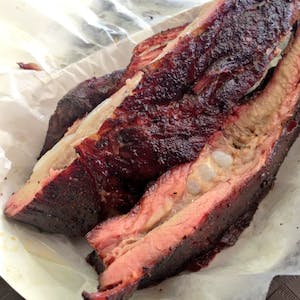 DV: When did you start with briskets?

AC: I’ve always cooked briskets around the house. It was one or two here and there. I had time to let them lay and get tender.

DV: I know you look like a young man, but if you opened your first barbecue joint in 2000, you must have had another profession before then. What was it?

AC: I was driving a truck. Today I still have my CDL driver’s license in case I need something to go back to. I’d hate to see that happen, because I love this here. This is cool.

DV: What’s your favorite part of the job?

AC: The mornings. Early in the morning firing up that pit. When the air is cool is clear and I set it off with smoke, that’s the coolest part. I can sit right there in my breakfast chair and watch that smoke roll across the highway. Those cars drive through and I know that flavor is hitting them.

DV: So that’s your calling card?

AC: Sometimes I smoke up the neighbors too. I just tell them I’m sending smoke signals. The same thing happens at home when I smoke in the back yard. I smoke out the neighborhood.

DV: You make barbecue at home too? I guess you can’t get enough. Do you smoke different  meats there?

AC: We cook steaks and bratwursts for us.

DV: Any gas grills at home?

AC: Oh no. That’s cheating. I might as well put it in the oven. We’re gonna get some wood and set it on fire. We’re gonna make coals and scoop those coals in the pit. It’s time consuming, but we got nothing but time. You just have to get up early in the morning.

DV: Do you try other people’s barbecue?

AC: I haven’t been lately. I started up to Snow’s a few weeks ago and got a flat. It took too much time to change, so I just came back home. We went out to Leon’s in Galveston. We were on vacation. I didn’t know who he was then, but I think his is the only other one we’ve had from the Texas Monthly list.

DV: Have you thought of adding any menu items.

AC: I like those beef ribs. I’ve got to build up a clientele that wants them before I start bringing them in here. I can’t hold them there in the warmer for a long time and I can’t afford to lose them either.

DV: Is there any one item on the menu now that you consider your specialty?

DV: Let’s talk about this new building we’re in. You have a bigger building, interior seating. From a business standpoint what sort of risk did you feel you were taking coming over here?

AC: We could have done this year’s back, but we wanted to let our reputation build. We didn’t want to do it too fast. We piddled around and before you know it twelve years went by. Then we had some trouble with the old building and nobody wanting to repair it. It was time to move. We walked in here and this was it. From the day we opened those doors haven’t closed yet from people coming in. We’re eight months in now and things are looking real good. Heading into football season it should be a big plus for us.

DV: You were open for a long time before your barbecue started to get noticed. I wrote about you on my blog in 2010. Had you seen a write-up before that?

AC: We got some local press, but it was bare minimum.

DV: Is that frustrating?

AC: Yes it is. You run a place for years and it takes someone coming from out of town to notice us. That not only put us on the map, it also brought some good attention to Bryan.

DV: I noticed for a while that people in College Station would ask me where to find good barbecue and I’d tell them about this place. They never heard of it. Is there a disconnect between the two towns?

AC: College Station is a college town full of students. Bryan is right next to it, but there’s nothing here related to the college. Students tend to stay in the college town. I think now the name of the street [Fargo’s is at the corner of Texas Ave. and MLK Blvd.] is negative to some people. Martin Luther King is considered a negative street name. Some people have told me they were leery about coming up here, but after they got here and saw the atmosphere they were all good.

DV: Is a lot of your business repeat customers?

DV: Since you’ve opened this location have you had to close up shop with meat leftover?

AC: No. We’ve sold out of everything every day. There is no reheating here. We don’t have to serve leftover food.

DV: How much do you cook on an average Tuesday?

AC: With briskets, maybe sixteen or twenty. That’s three cases. Today, those are already gone. On a Saturday I do five cases, but they go just as fast. Your best bet is to call in on Friday and place your Saturday order. We’ll hook you up.

DV: Do you have kids that are interested in barbecue?

AC: I have a daughter who turned twenty-five today. She works across the street.

DV: Have any of them worked here?

AC: They haven’t yet, but they will. They’re trying to dodge me, but they’ll get here. They’ve got to.

DV: How much longer do you think you can do this?