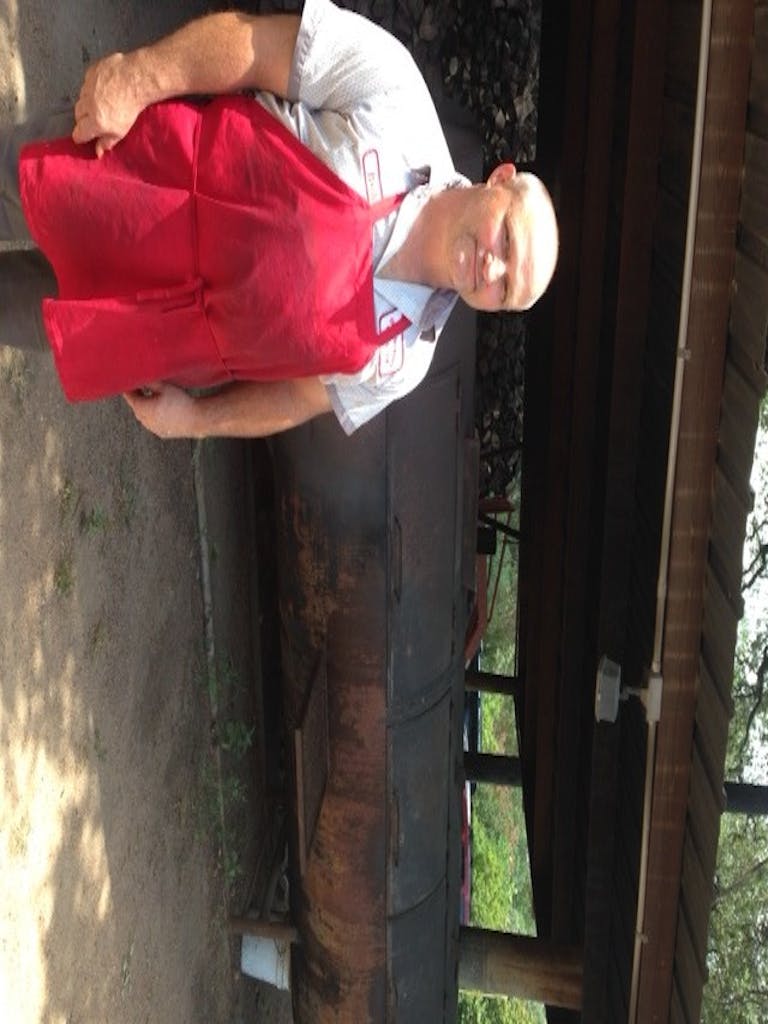 Bert Bunte is a man of few words. When I stopped in at Zimmerhanzel’s for this interview, he tried to shove it off onto his wife Dee-Dee, but then finally agreed to talk with me in a short window of down time.

After the interview, we went back inside into the pit room. There’s a broken thermometer on the door of the pit. Bunte told me it happened when he burnt up a pit load of briskets. “The dial kept going round and round, and it hasn’t worked since.” The briskets that day were a total loss, as was the thermometer. He didn’t see any reason to fix it.

Daniel Vaughn: When did you open this place?

Bert Bunte: February 13, 1980. We opened in February and we [Bert and his wife Dee-Dee] got married in June.

DV: So I guess you figured if you could work together fine, it would work out alright.

BB: I started working here on September 1 of ’79, I guess. We were building the building, and on Saturdays her father and I would put the walls in and the ceiling in.

DV: So this building was built in 1979 before the business?

DV: So there’s a lot of family history invested in this place?

BB: Yes, sir. We did most of the work and we’ve done everything.

DV: Did you build that pit inside, too?

BB: Her father did.

DV: That’s a beautiful pit. It’s one of the cleanest pit rooms I’ve seen anywhere. Usually there’s just junk piled up everywhere and grease all over the place. 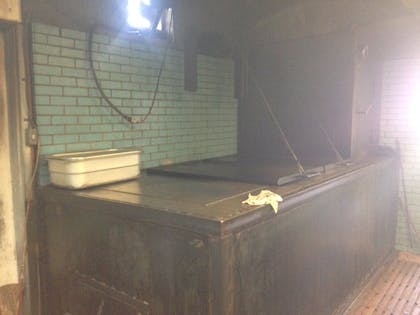 BB: I don’t like clutter too much if I can help it.

DV: Were you the pitmaster back then?

BB: No sir, I had an older gentleman, who is retired, but he used to have a barbecue place and he showed me everything.

DV: What was his name?

DV: So, you’ve have been around a while. Was it called Zimmerhanzel’s when you opened up?

DV: Where’d the name come from?

BB: My wife’s parents opened it. We started working for them right away. They owned a slaughterhouse next door.

DV: Do they still own the slaughterhouse?

DV: Is it still in operation?

BB: Yes, sir. My sister’s husband bought it from them and now he runs it. He’s had it for about forty years. We bought the place sixteen years ago from our parents.

DV: They retired and y’all took over?

DV: Did y’all stop doing barbecue for a while?

BB: For about six weeks. There were a few things going on. We were kind of burnt out, but then we realized that we wanted to start again. 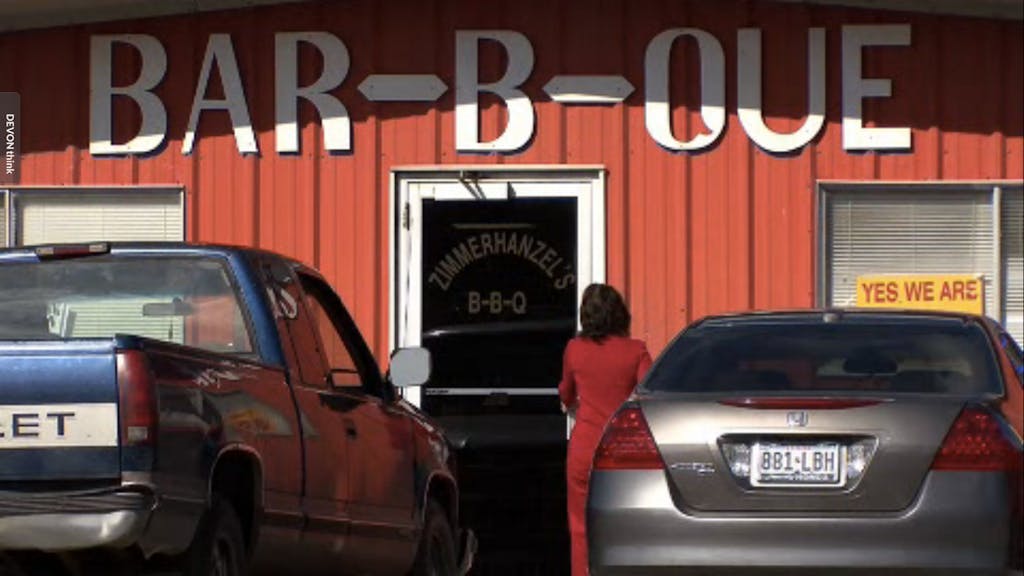 Video from the Austin American Statesman of their first day back after a six week hiatus.

DV: When you stopped, what were you planning to do instead?

BB: We went to work for the City of Smithville for three weeks, and then we decided to come back. We did a few repairs, but that was almost six years ago.

DV: Did you just get that bored with working for the City of Smithville that quickly?

BB: I just realized I’d made the wrong decision.

DV: Are you the only barbecue joint here in town?

DV: Were you at that time?

BB: When we closed? Yes, sir. There was another man before that, but he passed away. It was Charlie’s Barbecue. Mikeska had owned his place before that and he worked for Mikeska, but Mikeska’s place closed. One of the Mikeska brothers owned it.

DV: I didn’t know Mikeska’s had a place down here in Smithville. I assume you and Charlie knew each other pretty well?

BB: Yes, he’s a good man. I probably learned a few things from him, because we were both on the fire department for a few years and we’d always have a fire department barbecue. We’d barbecue across the river at the VFW at an old-time pit. You’d but the coals in there and put some grills on it, and you’d have to cover it up with tin. You’d shove coals in it and flip them.

DV: I was just up at a barbecue over in Millheim that’s been going on for like 100 years, and they have the same thing. It’s all direct heat, they cook the wood down to coals and they cook directly over it. Is that barbecue still going on here in Smithville?

BB: Well the fire department started doing fried chicken and sausage, but my church still does it every September.

DV: Which meats do you cook?

DV: Are you the cook for that?

BB: I get the meat and season it, but they cook it. There’s a bunch of old firemen who go to my church, and they still cook it. But they’ll start at 2:00am so after working all day Saturday I just find it hard to get up and work more.

DV: I’ll bet. Pitmasters have long hours. What does your normal day look like?

DV: It just never ends, right? When the place started, where did you get your meat from?

BB: We’ve always ordered the meat through Tender Meat or Waco Meat; now I get it from Waco Meat. I make my sausage over here still.

DV: When you started working here, had you done barbecue in the past?

BB: From that old man or from her father. Like I said, I learned from watching Charlie do a few things and from different people. I could probably still learn a few things. I’ve been changing things a little bit here and there.

DV: What have you changed? In 1980, did the menu look about like it does now?

DV: So you’ve never seen a need to get any fancier than that? No beef ribs or pulled pork?

DV: Well I like it that way, just keep it simple.

BB: Yeah, they just take more room away from my brisket. Really brisket and sausage are the best. 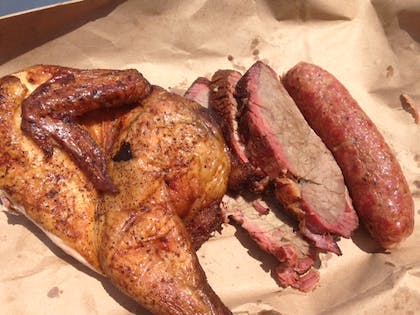 DV: Yeah I love that sausage. There are so few places around the state that still bother to make their own and stuff their own, so it’s nice to see that still happening some places.

BB: Yeah, I make it five days a week so we try to keep it fresh that way. But I just get the bigger briskets and cut off the back end, that’s what I’m making them out of.

BB: Pretty much. Every now and then if I need some extra I might throw some pork in, but not so much that it’s noticeable.

BB: From her father.

DV: How often do you make it?

DV: Are those the days you’re open, or are you open on Saturday too?

BB: Yes, but I try to get ahead. Saturday is our busiest day, so I don’t have time to make all the sausage and everything. Then I’ll come on Sunday mornings and season meat and cut the meat for sausage so we can make them right away Monday morning.

DV: What else is in it? Unless it’s a secret…

DV: I was amazed watching you in there. Your hands move fast. I’m sure you’ve linked up a lot of sausage.

BB: Probably over a million pounds.

BB: We sell mostly brisket and sausage. I want to make sure I run out of ribs and chicken every day, I hate having it left over.

DV: They don’t work out so well the next day, do they?

BB: It only takes about 30 minutes to cook the sausage. With brisket it gets close; if not I use it for chopped beef.

DV: I saw you grinding for chopped beef.

BB: I used to chop it by hand, but both of my elbows got messed up. I have tendonitis in both elbows.

BB: Well once I started using the grinder my elbows got better. I’d start chopping it, and the ends of the brisket are hard sometimes.

DV: Well you’ve got to do it over and over and over. How many briskets do you think you go through on a normal Saturday? 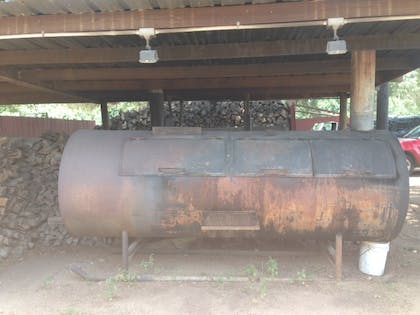 DV: What pits do you use on a normal basis? You have that pit inside.

BB: I use it every day, and on Saturdays I use that big one over there and sometimes this one if I need it. This one back here never cooks well.

DV: What do you think the problem is?

BB: We built it almost the same as that one, but the door is not as big and it doesn’t draft quite as well.

DV: Maybe it’s the direction of the wind.

BB: Could be. That one cooks better with a south wind blowing.

DV: What kind of wood do you cook with?

DV: You have quite a lot stacked up around here. Do you get it in green and let it age yourselves?

BB: Yes, sir. We store it at her father’s house. I haul up a little bit every week. We used to usually load this trailer every six weeks, so this trailer-load would last me six weeks.

DV: How long do you like to age it?

BB: Two or three years. For these pits it has to be pretty dry.

DV: It’s not that Zimmerhanzel’s is a stranger to the pages of Texas Monthly, but did this latest Top 50 do much for your business? 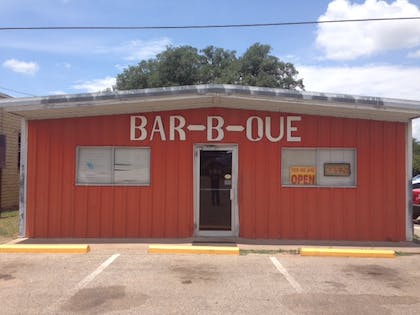 DV: Did it bring in more people on the weekends?

BB: A lot of people came and tried it.

DV: And you were movie stars a couple years ago too, right? At least the building was. Weren’t you in Bernie?

BB: Yes, it was filmed here.

DV: What was it like having a film crew in here?

BB: My wife and them stayed here. We shut down by 2:00pm and they’d start setting up and they’d film until late at night.

DV: They just filmed for one day?

BB: Yes, sir. And then Willie Nelson shot a music video in there.

DV: Really? I didn’t know that.

BB: I don’t know if it was two years ago, but he and his son sat in there talking to each other. They said it was only going to take a couple of hours, but they started at about 9:00am and it took through dinner. Everybody kept coming to the back door wanting to buy food, and then when Willie left everybody wanted to take their picture with him. But he’s really friendly; he took every picture that was asked. I think he stayed almost until midnight that day.

DV: Do you live here in Smithville?

DV: And this is where you grew up as well?

DV: Every time I look up family records around here I see the Zimmerhanzel family name everywhere but not so much the Bunte name. Where’s your family originally from?

DV: So you get a little less hassle from the health department, or do you get more of a hassle?

BB: No hassle really, either way. He comes in the back door all the time.

DV: Not wanting to stand in that line?

DV: Your sausage seasoning is pretty simple, is it about the same for your other seasonings?

BB: Yes, sir, it’s pretty much all the same.

DV: So you just keep it simple. So you got a little bit of a taste of what it was like to leave the barbecue business and you came back to it pretty quick. How much longer do you have in you?

BB: I don’t know. My wife and I, we’re both having some health issues. She found out she had a bad valve in her heart, she had thyroid cancer last year, my blood pressure has been high and I’ve been having breathing problems from all the smoke all these years. We’re going to keep going; we don’t have many plans right now.