Henderson, Texas is a small town of about 13,000 between Tyler and Nacogdoches in East Texas. This is where Bob Allen was born and raised, and where he aims to stay. He’s seen a lot of Henderson barbecue joints come and go in his seventy-four years, but he has stayed strong at his own barbecue joint for almost thirty-four years. Keeping up the legacy is now up to his two sons, Michael and Mitchell. They will carry on when Bob and his wife, Billie, retire. I suspect you’l see plenty of Bob even after he retires. He just likes chatting it up with his customers too much to stay away.

Daniel Vaughn: How did you get into the barbecue business?

Bob Allen: I’ve been cooking a long time. My mom was a great cook. There were four of us boys and the two oldest did a lot of cooking. There were six of us total, so we spent a lot of time in the kitchen and I really took an interest in it. Finally, I started cooking in the backyard on the pit. I did that for a few years and thought I was getting pretty good. Then my good friend built me a pit that was pretty good sized and was mounted on wheels. I decided to go out and see if other folks liked my barbecue as much as I did, you know what I mean? We parked it under my buddy’s shade tree in May of 1980 and stayed there until July. It was working real good until the police told me I had to get out from under that tree. My customers’ cars were blocking the traffic.

DV: What did you do then?

BA: I rented a little building in the neighborhood that was twenty by ten. I went in there and started cooking. Then we added another pit. We kept growing and growing until 1987 when we moved into this building. Now we’ve added onto this one twice.

DV: Did you grow up in Henderson?

BA: Oh yeah. I’m at home. I’m within eight miles of where I grew up.

DV: Is that where your parents grew up too?

BA: Yes. Everybody came from Rusk County. They were out in the country. Daddy was one way and momma the other, but they found each other eventually.

DV: So your family has deep roots in the area?

DV: Was there anyone in your family that taught you how to cook barbecue, or was it just trial and error?

BA: I have not had a teacher but the good Lord. I messed up a lot of stuff, but I finally learned how to do it. My dad didn’t cook at all. He couldn’t cook a good egg. That’s the truth.

DV: How old were you when you started selling barbecue?

DV: What did you do before that?

BA: I’m a butcher by trade.

DV: Which butcher shop did you work in?

BA: I worked at Hale’s Meat Market for about twenty years. That was big help because I had a jump start on a lot of people because I knew what kind of meat to buy.

DV: Is that meat market still around?

BA: No. It’s not there any more. Both of those guys are deceased and gone to heaven, or I hope that’s where they went. They were nice guys as far as I knew.

DV: Where do you get your meat these days?

BA: We use three or four different ones because we need different products. You’ve gotta find the best prices. We use US Foods, Ben E. Keith, Sysco – the big boys. I’ve got one small place that I buy some things from because I know what being small is like.

DV: Back when you opened up under that shade tree, what did your menu look like?

DV: When did you add the boudin?

BA: A couple years ago. They kept asking for it, so we just started doing it. We sell a lot of it now.

DV: You and I have talked about your briskets and how you serve them. Unless a customer asks for the fat and crust to be left on they won’t get any.

BA: Oh no. You sure won’t. You’ve got to ask for it untrimmed.

DV: Do you prefer it trimmed, or is that just what your customers demand?

BA: I sell about 95% of the brisket trimmed of everything, but I have sold more with the crust on since that [Texas Monthly] list came out. That’s okay because I like that part. That’s not a problem.

DV: Do you eat the fatty stuff?

BA: Not really. I do eat the good stuff, but it’s just a bite here and there. Don’t misunderstand me. I’m not afraid of it, but I have to eat wiser because I’m a diabetic. I have to eat good things.

DV: You’ve got to watch what you eat.

BA: This little boy told me that barbecue men are supposed to be fat. Well, I’m not. One reason is because I can’t eat like I want to eat. You know what I’m saying?

BA: That’s right, but I don’t really cook much anymore. I come to work, but my boys do the cooking. Michael and Mitchell. They’ve both been cooking for about fifteen years. I still do a little. Somebody’s gotta get out of pocket for me to do much of anything. I stay up in the front to cut meat and talk to the customers.

DV: I guess you’ve earned that right by now.

DV: Have they worked with you since they were old enough to?

BA: They ain’t never had another job. They were about ten when they started sweeping floors. They’ve been working here most of their lives. I’ve got the two best cooks in the country. I keep telling them I’m gonna give them this thing, so they better be good.

DV: So they’re both planning to keep this thing going after your retire?

BA: That’s right. I’m going to sell it to them for a dollar a piece. I guess I’ll give them both that dollar so they can’t say they don’t have enough to buy it.

DV: When are you going to retire?

BA: I’m one of those kind that can’t set at home. I like to fish, I like to hunt, and I like to work to. Mmm hmm. I also like people. I’m a people person. You see, when I’m at home my wife doesn’t pay me.  Those honey-dos don’t pay, so I come up here.

DV: You work with your wife, right?

DV: Is she the one that makes those incredible cobblers?

DV: At what point did you get comfortable with Michael and Mitchell doing the cooking? Was there a test?

BA: I just knew. They’d been working the pits for a long time. I didn’t jut turn them loose, you know, but they were ready. They’re good young men, so I love to see it. I told my wife if I knew our kids would be this good we’d have had a dozen of them.

DV: You’ve had a barbecue joint in Henderson for over thirty years…

BA: It’ll be thirty-four if I make it to May.

DV: …how have you seen the barbecue in that area change quite a bit? 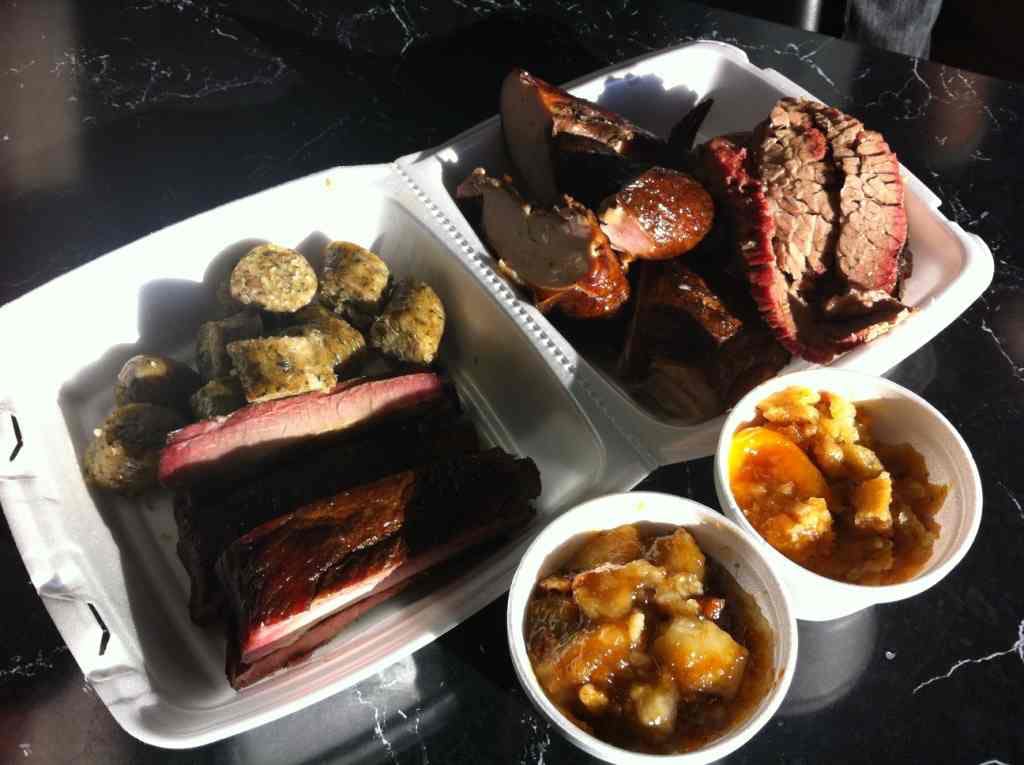 BA: Yes. At one point there were a lot of barbecue joints here. They would come in and stay a few years. Now we’ve got a Bodacious, so I guess they’ll be around for a while. Competition is good for everybody. I just don’t want too much of it.

DV: You also have a non-traditional competitor in town with Sadler’s. They do brisket mainly for grocery stores. Did they used to have a barbecue joint in town?

BA: They were around. They used to call it Sadler’s BBQ, but now it’s Sadler’s Smokehouse. It’s a big wholesale barbecue business. The owners used to come over here to eat, but I haven’t seen them in a while.

DV: You’ve had some real staying power. I’m guessing you’ll be hanging around the barbecue joint as long as your sons will have you.

BA: Oh yeah. I’m gonna start fishing a little more next year. If I’m gonna get some more fishing in I need to get started. When you’re seventy-four you need to start thinking about yourself.

DV: What do you fish for?

DV: Do you ever smoke any of it?

BA: Just at home. I cook other stuff at home like a pot of chili. I make a mean meatloaf too.

DV: Is there one thing you eat most often at the barbecue joint?

BA: I eat everything up here, I just don’t eat a whole bunch of it. I can’t sell something that I don’t know what it tastes like.