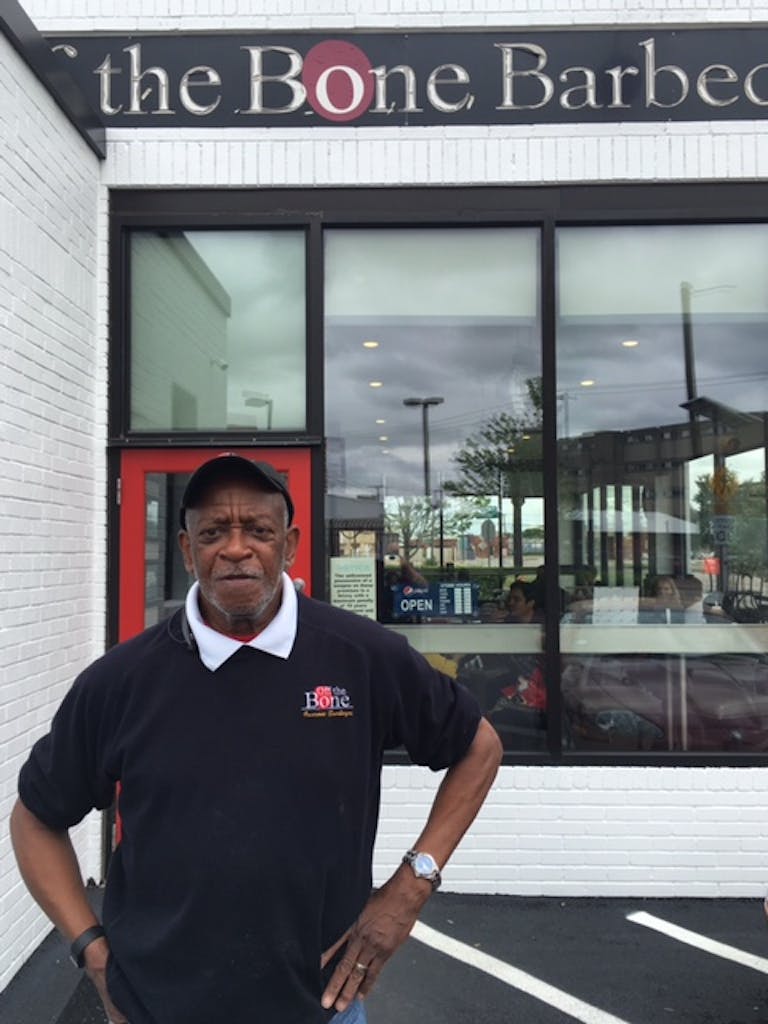 Owner/Pitmaster: Off the Bone Barbeque; Opened 2009

Off the Bone was once a tiny joint in a neighborhood without much of an identity. Since it opened seven years ago, The Cedars has grown into a destination, and the barbecue joint has grown with it.

Not willing to rest easy in retirement, owner and pitmaster Dwight Harvey started the joint after a long career in finance. He sat with me in his new, expanded dining room. A recent addition has doubled the size of the place, and the menu keeps growing too. Big beef chuck ribs are the latest addition, but Harvey doesn’t just chase the latest trends. As far as the recent barbecue movement in Dallas goes, he’s a trendsetter. Before Lockhart Smokehouse, Pecan Lodge, Slow Bone, or Cattleack Barbecue, there was Off the Bone.

Daniel Vaughn: When you opened Off the Bone, how many square feet did you have to work with?

Dwight Harvey: About 800, and that was for everything. It was on old service station, and we used the service bays as a patio area.

DV: What made you choose this location?

DH: We just kinda happened upon this location. We had to come in and redo everything at the outset. It was a challenge, but it turned out to be pretty good for us. The Cedars area is really coming around.

DV: What did The Cedars look like seven years ago?

DH: Southside was open and the police headquarters was here. There used to be a club called Brooklyn’s, but that was about it. Cedars Social wasn’t open yet.

DV: Are you from this area originally?

DH: Yes sir. Right here in South Dallas. This is pretty much home base for me.

DV: How did you learn to cook barbecue?

DH: Trial and error. Cooking at home for the family. I had a lot of guinea pigs back then. They had to endure most of it, my wife and two kids. I was working full time at that point. This was a hobby that turned into something I wanted to do, and that’s what I did after I retired.

DV: Your retirement plan was to open a barbecue joint?

DH: Yes, believe it or not. When you step out of the corporate world, it’s so fast-paced that you can’t just retire anymore. There’s only so much fishing and golfing you can do.

DV: Where did you work before?

DH: I was in finance. I was an accountant for Frito-Lay in Plano at the headquarters. I was with them for thirty-eight years, and I retired nine years ago.

DV: What did your parents do?

DH: My mom stayed at home. My dad had a forty-hour job, and he was a minister as well.

DV: And they got you through college to go into finance.

DH: They struggled, but they got all three of us through school.

DV: Where did you go?

DV: Did you get a finance degree there?

DH: I was one semester short of a degree. I started a family early and I needed to get back to my family.

DV: Frito-Lay took you on then, but that’s not something that would happen these days.

DH: Not at all. I started at the ground level. I worked in the company store where they sold chips to employees. I was keeping track of the money there and ordering products for the store. I worked up from there for thirty-eight years. I just wanted a chance and to show them I could work hard.

DV: Nowadays an education is currency in that field, not hard work. That’s why providing an education to your children is the goal for most parents. You’ve provided that for yours, but you told me earlier that you wanted to leave something physical behind for your family. Why was that so important to have something like Off the Bone to leave to them?

DH: I wanted to make it easier for them than it was for me. My folks did all they could and the best they could to help us to have a little more than they did. It’s something you want to carry on. I wanted them to have something better than I had, but I didn’t just want to give it t them. They had to put the work in. I wanted them to have something to be proud of, and have a way to make money. It gives you a certain amount of pride to have that to pass down.

DV: So, they better not sell it after you retire again.

DH: I would hope not.

DV: Did you make the right decision about your retirement?

DH: Oh yeah, but we started in 2009. If you remember that’s when the economy was heading off. All the 401K’s were gone. We’d already taken out a lot from our accounts to do this place.

DV: You opened at a bad time, but took the money out at the right time.

DH: Dumb luck, but it worked out. 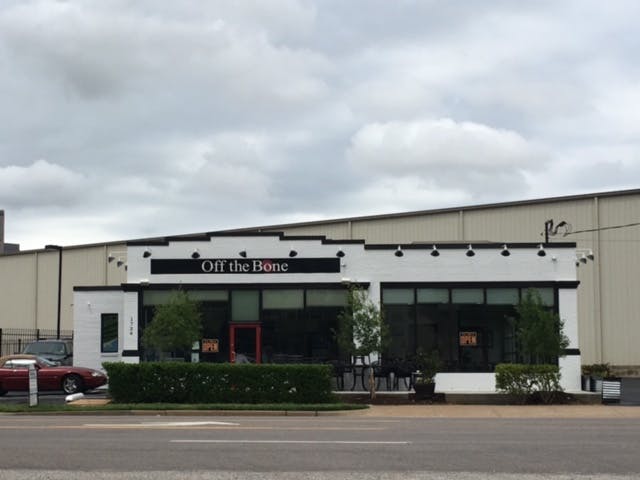 DV: Were you cooking barbecue seriously before you retired?

DV: Do you remember your first barbecue success, like when you first really nailed it?

DH: I can’t really think of anything. Barbecue is one of those things that you never really nail it. You keep trying and trying, and get better and better, but to me you never get to the very top. You’ve got to keep working on it. There’s a whole lot of variables.

DV: Did Off the Bone start as a catering company, or a restaurant?

DH: We had both. We were going to send catering out the back door and sell a few sandwiches up front. It turned out that we ended up doing about 40 percent catering and 60 percent walk-up.

DV: You started small, then enclosed the front for a dining room. Now you’ve doubled the size with this latest expansion. What prompted that?

DH: We added the patio three years ago. We started this addition a year ago. It doubled our capacity. We felt the need seeing our client base growing.

DV: The menu has also expanded quite a bit since you first opened, right?

DH: When we started it was ribs, beef, chicken, and sausage. There was potato salad, baked beans and cole slaw. We’ve expanded all of it. My wife, Rose, handles all that and the desserts.

DV: Does your son still work with you?

DH: It’s my son-in-law now. My son quit and went back to school. He wanted to be a teacher and let fourth graders run him crazy instead of his dad [laughing].

DV: I don’t think you have gotten enough credit, from me included, for being at the forefront of the craft barbecue movement in Dallas. Back in 2009 there was no Pecan Lodge, Lockhart Smokehouse, and Slow Bone. All these places that get credit for putting Dallas barbecue on the map came after you.

DH: Pecan Lodge was right there at the Farmer’s Market.

DV: Well, you opened a year earlier. That’s got to feel good to know you were in front of it all, before Dallas became known as a destination for good barbecue. 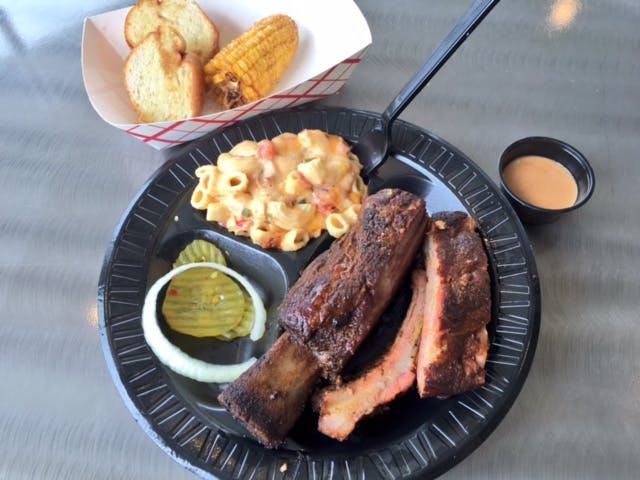 DV: Have you changed the way you cook over the years?

DH: We added mesquite for our briskets that we cook overnight.

DV: The brisket I’ve been served here over the last few years is a quite a bit different from what was here when you first opened. The brisket used to have its bark and fat trimmed off. Now it’s not.

DV: I also noticed the ribs today didn’t have any sauce on them. That’s a change too.

DH: We quit putting sauce on them. Most people want it on the side. We’ve added a sauce for the beef rib. It’s a horseradish barbecue sauce.

DV: The beef rib is new too.

DH: Yeah. About six months ago. It’s going pretty good. People have to get used to the price of them. They’re not cheap.

DV: One of my favorite side items anywhere is the deep-fried corn here. Where did that idea come from?

DH: We kinda stumbled into that one. I went to the Farmer’s Market and bought a case of corn. I wanted my wife to make maque choux. She couldn’t get to it, so I was sitting here with a case of corn. Somebody said, “Why don’t we drop it in the fryer and see how it turns out?” That’s how it started. One of the sous chefs added the spicy seasoning and the wedge of lime. It’s been one of my biggest sellers. 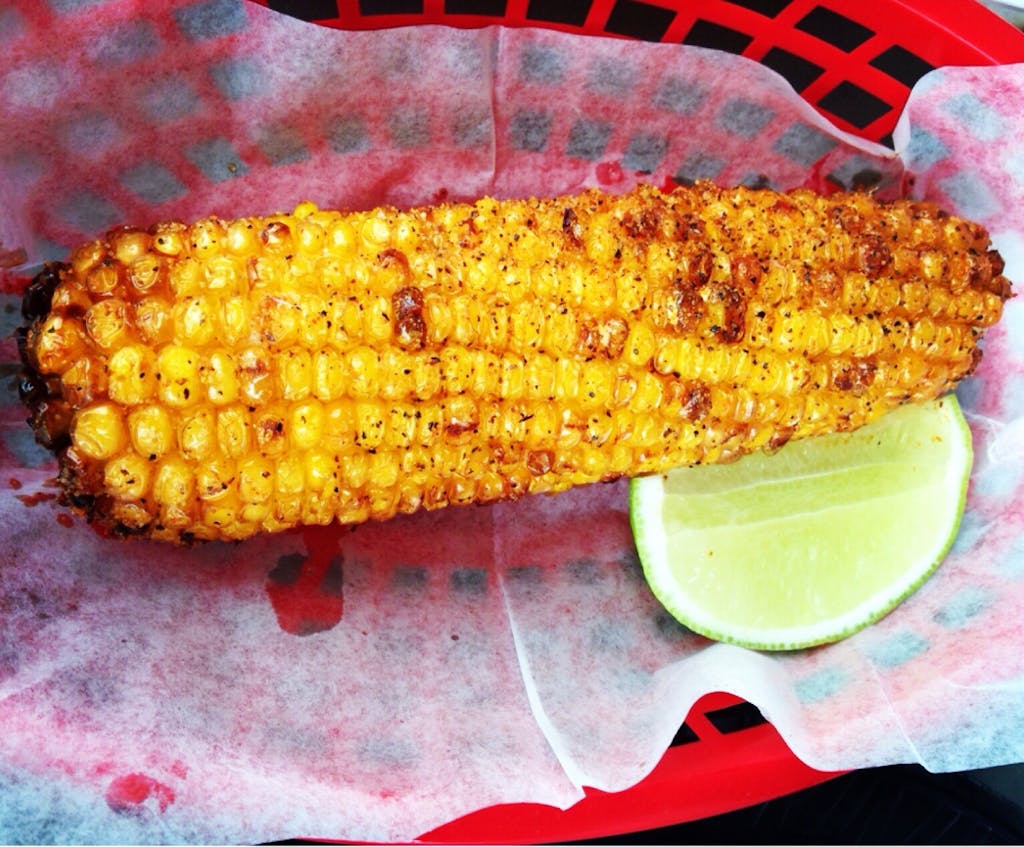 DV: You started small and have expanded a few times over the years. If you’ve got to keep moving to stay competitive, what’s next for Off the Bone? You’ve gotta have at least twenty good years left in the business.

DH: I hope not. At seventy-five I plan on handing it over to my son-in-law and my daughter. I’d like to see it grow a little bigger. I’m not too optimistic about having a second place. I just need to develop this into what we really want it to be and go from there. All in all, I think it’s going to work out.