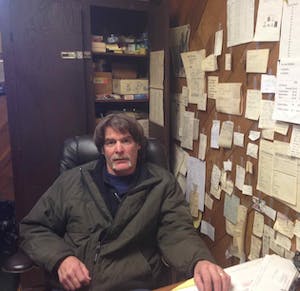 Erik Mrok is mad, and with good reason. He took over a legendary barbecue joint in Houston that had been around for over fifty years. Just ten years later he had to watch a good portion of it get demolished to make way for a new light rail line. Now, the dining room is gone. Customers walking into the front door to find themselves smack dab in the middle of the kitchen. To pay you’ve got to see Erik in his office where dozens of notes cover the walls. When I inquire about them he said “it’s easier than trying to file, but then I can’t find it on the wall.” He just made it through a holiday season that brought him plenty of business, so his spirits were high until the subject of the rail line came up. Even with the grudge, he’s making the best of it, and Lenox is making some good barbecue to boot. As the logo says “Still Smokin’ for Over 65 Years.”

Daniel Vaughn: Lenox Bar-B-Que started in 1946. Has it always been in this building?

Erik Mrok: It was two blocks down the street at the corner of Lenox and Harrisburg. Across the street is the Wallis State Bank. That building used to be the old Sabayrac Battery. Upstairs was a big room. The legend is that Leonard McNeill won this business in a craps game up there. It was a little four-seat diner. Now can you imagine the guy who lost it explaining to his old lady why he didn’t have to get up and go to work the next day? That’s the story from all the old timers around here. 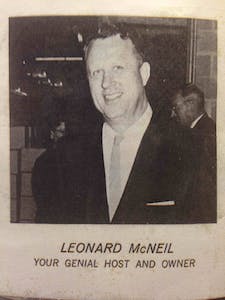 DV: Did you buy the business from Leonard?

EM: No, I bought this from Charles, one of Leonard’s sons. Jeff was the other son, and he was a wild child. They found him in Vegas in his room with a slashed neck. Anyway, Charles just sold everything.

DV: Was this the only location left when you bought it?

EM: There was another location in OST too, and that’s where the Oyler 1300 came from. You can see out there around the doorway where they cut the wall to get it in here. We had to roll it on rods like they did when they built the pyramids until we got it in place.

DV: What year did you buy it?

DV: Did you just continue with the same cooking method when you took over?

EM: I did. I had to get some new cooks and slicers. I was checking food costs and things weren’t adding up. I swung in here at 3:00 in the morning and one of them was slinging cases of briskets into his truck. Another guy that was here liked the cash more than the food. There used to be up to twenty-five employees here, but now I’m down to six.

DV: Who does the cooking now?

EM: There are two brothers out here. Sostenace and Teresio.

DV: What were you doing before you bought the place?

EM: I worked at Luby’s Cafeteria from the time I was sixteen. I had ten years in the night club business during the disco days at Cooter’s nightclub. It was blast. I’d never go back, but I wouldn’t have missed it for the world. Then for ten plus years I was a chef down at Brenner’s Steakhouse on I-10. I went from $45 prime steaks to $5.25 plate lunches. The only Mercedes in this parking lot was one that was stolen and ran out of frickin’ gas.

DV: What made you move into the barbecue business?

EM: Things were going south at Brenner’s. It was time to look. My dad had done business with Leonard when he was doing barbecue events. We would show up and drop off the tables and chairs and then come pick them up when the party was over. I was around this place a lot when I was a kid.

DV: So this is where you grew up eating barbecue?

DV: I first heard about this place when you had to demolish half your building to make way for the new rail line. Why didn’t you move?

DV: So you had to keep the older portion?

EM: Yep. We lost two-thirds of our building. I still have a Conex container out back to store just the kitchen stuff that we don’t have room for now.

DV: How did that discussion go with METRO?

EM: There wasn’t a discussion. I just got screwed. They first offered $35 per square foot for the building and the land they wanted to take over. At that point it was $250 per square foot to build. I knew we had a problem. I don’t have the room to put the dining room behind us.

DV: So you had to pay to put in the new parking lot and a new front on the building with what they paid you?

DV: How long did they give you to make the changes?

EM: They wanted it gone by September of 2009. They were really pushing.

DV: When did they first tell you the changes needed to be made?

EM: It was around Christmas time the year before. The two guys came in. “We’re so-and-so with the city of Houston…” They gave me a card and said to call them after Christmas.

DV: The news story I saw said you had decided to close the place. Is that true?

EM: Well that didn’t help. It irked me so bad. Some reports said we were closing. They needed to add “to rebuild and reopen.” When we got going again I had to call everyone and tell them we were still open. Even four years later there are former customers who didn’t realize I was still open.

DV: It’s safe to say you were never planning to close down.

EM: No. It doesn’t matter now. I blew it. I wasn’t advised properly. I should have taken the whole building down and built apples to apples in the property behind here.

DV: How long did it take to build your business back up?

EM: Two years. What really sucked was a two month construction schedule became four months and I didn’t reopen until late December. I missed all my Thanksgiving business and all of Christmas too. That’s our busiest time of the year. I missed it by that much.

DV: The new configuration changes the entire way you have to run your business. Does the Health Department have any issues with people having to walk into your kitchen to order food?

EM: They haven’t, but that’s also why we have Medel’s down the street. It’s a fifty seater sports bar. There’s atmosphere with TV’s going. We’re doing a servery out of there. We can’t fry anything, but you can get the rest of the menu. We pack up everything and go there every day. We have a steam table, refrigeration, everything we need. We slice everything to order there.

DV: Let’s get back to Leonard McNeill. Did you know him well?

EM: I was just a little kid, but my dad did.

DV: I read in Robb Walsh’s book about Leonard’s design of a rotisserie pit. Do you know the history of that design?

EM: It’s the same deal. I gave him that cause that’s the story I heard. Leonard used to have a group of dudes who were drunker than crap cooking meat all night long in the brick pits out back. He needed to clean things up, so I guess he had it in his mind that there had to be a better way.

Here is an excerpt from the previously mentioned Robb Walsh book Legends of Texas Barbecue explaining the genesis of the rotisserie pit in Texas:

“IN 1949, A HOUSTON MACHINIST named Leonard [McNeill] won a tiny restaurant near Lenox Street in Houston in a game of craps. He renamed it the Lenox Barbecue…[McNeill] prepared food at a restaurant, where he had to abide by the sanitary codes. But ordinary brick barbecue smokers couldn’t accommodate jobs the size of those the Lenox Barbecue was being asked to do. So the former machinist introduced barbecue to the age of mechanization.

“[McNeill] bought an enormous bread-rising oven from the Rainbo Bread bakery. The oven had a rotating mechanism inside that moved the dough through a timed cycle. [McNeill] converted this machinery into a mechanized wood smoke rotisserie that could cook three thousand pounds of meat at one time.

“Today, [McNeill’s] Lenox Barbecue on Harrisburg Street in Houston is run by Erik Mrok, whose father was a friend of [McNeill’s]. The restaurant uses three rotisserie ovens of a type patented in 1967 by Herbert Oyler of Mesquite. Oyler, a barbecue restaurant owner from Mesquite, also started by tinkering with a barbecue rotisserie made from a bread-rising oven. Whether he was working independently, in competition, or in cooperation with [McNeill] is not known.”