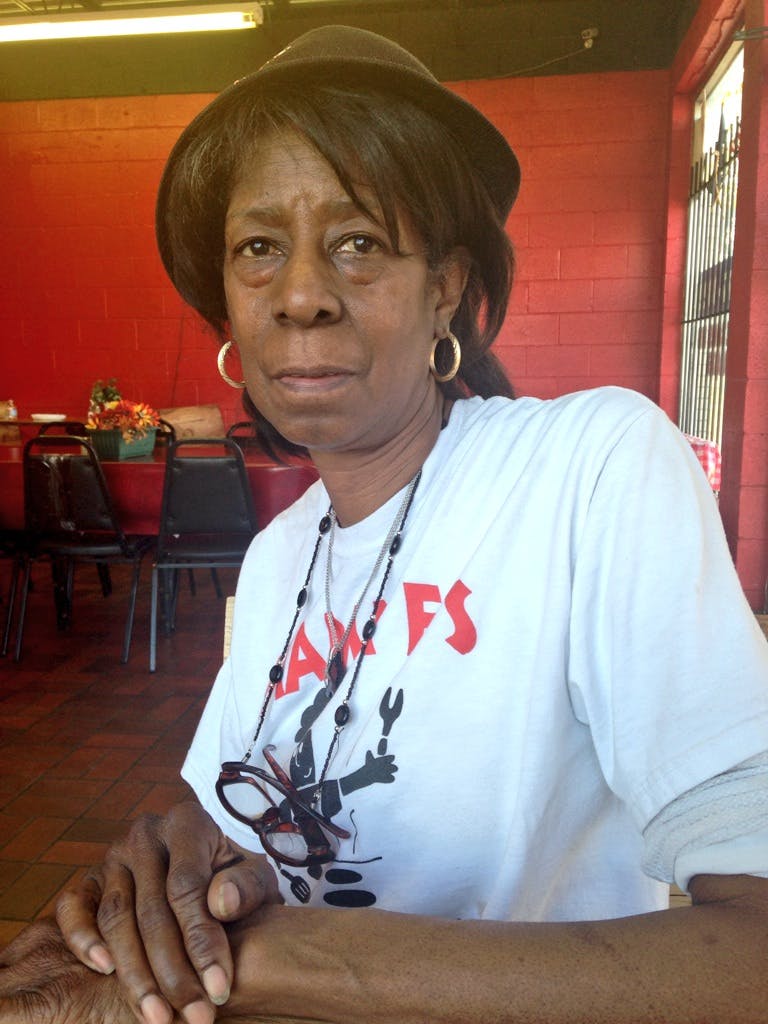 Ernestine Edmond has cooked most of her life. She learned about killing and processing chickens from her mother, and her mother-in-law taught her about cleaning a fresh hog. She’s never looked at chitterlings the same way again. She is one of few female pitmasters in Texas, but she’s not just the cook. Ernestine owns the business, the building and the property. After just eight years in business she plans to have those loans paid in full this year.

The smoked meat here has a unique flavor from a heavy rub and a good homemade sauce. Along with the pecan and oak she uses pear limbs from a tree at home along with apple limbs from her neighbor’s tree. Even if you fill up on barbecue, be sure to grab one of her homemade pies before you leave.

Daniel Vaughn: So, Ernestine, you must be the “E” in Mama E’s.

DV: Where did you learn to cook barbecue?

EE: I’ve always cooked. As a child coming up we were always in the kitchen with mama. Today it seems like barbecue is a man’s sport, you know? But women taught them how to cook it though. For them to come up here and see me man my pit, I guess it’s not common. I put my own wood in my firebox and keep my own fire going.

DV: Do you consider the barbecue that you do a part of any particular style?

EE: I just grew up knowing it. There’s some things we do differently up here in the North that they don’t do in South Texas. Here you don’t just sprinkle the rub on, you massage it in there. I like for it to sit overnight.

DV: And you do it the right way here, too. It’s all homemade, right?

EE: My mom put it in me that if you didn’t make it homemade, it wasn’t cooked. I make my potato salad, homemade biscuits, fresh gravy, fresh mashed potatoes that are mashed as you order them. My pies and cakes are homemade too.

DV: Are these all family recipes?

EE: They’re all passed down, yeah.

DV: And are they all in your head, or have you written them down?

EE: They have all mine written down on the computer now.

DV: What does your daily routine look like here?

EE: I’ll leave here about 8:00pm tonight. Those briskets that are on there now will stay there after I leave. My husband will come by about midnight and check them. Somebody else will come around at 2:00 or 3:00 in the morning to check again, then I get back in here at 7:00 to take them off.

DV: Are you from this area originally?

EE: I’m not from Fort Worth, but I’m from Texas. I’m a Texan from Temple.

DV: I was just in Temple and I found another female pitmaster down there. There really aren’t many in Texas.

EE: I didn’t realize that until they did a write-up on me in Star Telegram. There were all these guys in there and I was the only female. I was like “we cook too, We do it.” I’ve just always loved cooking.

DV: What do you think leads to Texas barbecue being so dominated by men?

EE: I don’t know. Since the beginning of time the men would go kill it and bring it home and mama would cook it. I’m not taking anything from the fellas. They do a wonderful job.

DV: That female pitmaster in Temple said she had potential customers walk out after they found out she did the cooking. Have you ever run into that?

EE: Only when they look at my size [Ernestine is tall and thin]. “Who is mama? Where is Mama E? You?” That’s right. I got the war wounds.

DV: But they all end up ordering food anyway?

EE: Some people come by and get it to go. They’ll take it to some friends. Those people come back here and say “I tasted this and I couldn’t believe that a woman did it. I just had to come see for myself.”

DV: They’ll tell you that?

EE: Oh yeah, but that’s okay as long as they come back and the register is still cha-chinging.

DV: When did you open this place?

EE: I had the opportunity to acquire this building eight years ago. My husband was deployed and my youngest daughter was deployed in 2005.

DV: Where were they deployed?

EE: My youngest daughter was in Iraq. She’s done two tours in Iraq. My husband is recently retired. He did four years in the Army. He was in Fort Jackson, South Carolina. He was an instructor getting the young fellas ready to ship them over there. My daughter graduated high school in 2001 and went straight into the military. Right after basic training she went to Iraq.

DV: That had to be tough to watch.

EE: It was. Especially with her being a female.

DV: And your baby.

EE: That’s right. She’s the youngest in the family. So when they were gone I was whining a lot. My husband said “find something to do. You like to cook. Go look for a place.” My oldest daughter was going to Texas Wesleyan at the time, so we started looking for places.

DV: So it was started to keep your mind off of what was going on with them?

EE: It was really to keep me busy. It was hard to watch the news and to know that she was over there. I never really was able to talk to her much while she was there, and when we did it was a limited conversation. It was scary. She was there during the time when they found Hussein under the ground. She doesn’t talk too much about it. They told me to wait and it will come out eventually.

DV: What about your husband? You got to talk to him more often, right?

EE: He would talk to me every day and would constantly encourage me to find something to do. When I found this building I called him. He said “go for it.”

DV: How long did it take to get it open?

EE: It took me a year. They were doing it already. I bought the building under renovation.

DV: What was it before?

EE: Back in the early seventies it was a Kentucky Fried Chicken. I know when it closed. It was in 1976. I know this because my husband was a Church’s Chicken manager at that time. That’s back when we had big competition going. In 1977 it became a barbecue place called Frank’s. This part of Fort Worth was really busy at that time.

DV: Rosedale was more of a corridor back then?

EE: It was. This was a happening place. I don’t know when Frank came out of it, but he got sick. He has since passed on. In 2005 is when I acquired it.

DV: You say you’re from Temple, but you’ve been in Fort Worth for a long time.

EE: I’ve been here in Fort Worth for like thirty-seven or thirty-eight years. I moved here in my early twenties. I met my husband here. He had gotten back from two tours in Vietnam in 1972. We got married a year later. Back then, my husband and I were both managers at Church’s Chicken. We were both on Rosedale. I was in a store on the far east end and he was on the west end. I’ve always been in the food business. After Church’s I worked for Piccadilly then Furr’s. The first barbecue place I worked was called the Rib Factory.

DV: Is that where you learned how to barbecue?

EE: No. I already knew how from cooking at home. I got out of the food business for a while, but my heart was always in cooking.

DV: You said you knew how to barbecue, but is it more difficult now that you have to do it every day?

EE: I don’t find it difficult. All of us, we just do it. It’s mostly females that do it all, too.

EE: My youngest does when she comes home. My great grandbaby’s here too. She’s six, but she’s a part of Mama E’s. She does everything that I do. She walks behind me, and I know that when God calls me home I’ve got that fourth generation to pick up my torch. My husband is retired from the postal service, then he retired from the military. Now he’s a truck driver, and he’s the pastor of a church. He won’t be still. If I don’t feel like starting the fire in the morning I can call him. He’s my back up.

DV: It takes the whole family to keep this place running, huh?

EE: When I first got here we were planning to just work it as a business. Then I got to seeing that it’s a ministry. When you cook it’s a ministry. You get to feed a person physically, but you get to talk to them and get to know them and their problems. I know God put me here to get a chance to meet people. I really love what I do.