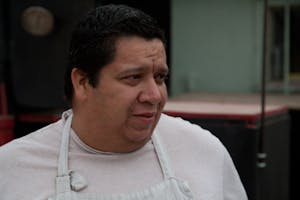 A few weeks back someone tweeted to me that they’d spotted Israel “Pody” Campos in line at Pecan Lodge in Dallas. That’s a long way from his home in Pecos. I tried to get him to stick around so I could go interview him in person, but he had eaten and was gone before I could get there. Instead I called Pody just after his barbecue joint in Pecos had closed up for the day. He was happy to talk and excited about coming to his first Texas Monthly Barbecue Festival. Pody is a likable guy full of humility and wonder at his recent good fortune. I first met him when I was researching a book and his barbecue was surprisingly good for the area. I’m not sure he knew how special his place was, but I think he’s catching on.

Daniel Vaughn: You just closed up for the day?

Pody Campos: We just closed a little bit ago. We’re cleaning and getting everything ready to start cooking in a couple hours for tomorrow.

DV: How big of a crew do you have there at Pody’s?

PC: Including my wife, it’s four. My mother, my wife, my aunt, and my sister. Aside from my wife, that’s the crew that I started out with. It’s all family. They’ve been loyal. All the women here keep me straight.

DV: How long ago did you start?

PC: Over two years ago. August 18, 2011 was our first day of operation. We just hit our two year anniversary.

DV: What made you want to open a barbecue joint in Pecos?

PC: I’m originally from here. I’ve moved around the West Texas area and I finally made it back home. I worked the Texas Municipal Police Association in Austin and commuted back and forth. They do training throughout the state.

PC: Yes sir. I trained officers and administrators too. I trained them in budgeting and taught them what to look for with all the budget constraints. Then the constraints finally affected me.  They made some cuts, and with me living out here in Pecos I was the first one to get cut.

DV: That was quite a commute.

PC: I’d spend a couple weeks at a time in Austin then come home. I would then travel throughout Central Texas and South Texas. That’s when I got hooked on barbecue.

DV: So you ate a lot of barbecue on the job?

PC: Yes. Back home our traditional Mexican barbecue would be oven-cooked brisket. It’s called carne desebrada. It’s shredded beef with seasoning. All of your quinciñeras and other traditional celebrations you’d have the carne desebrada. That’s the only brisket I knew before I went to Central Texas. I wanted to bring some of that smoked brisket taste back to West Texas, and I thought the key to that was the wood and the smoking technique. A lot of folks around here had never had smoked brisket before and it made an impact.

DV: You were making what we think of as a very common food in Texas in the form of smoked brisket. It’s surprising to me that it was new to the folks in Pecos.

PC: They were used to the traditional oven-cooked brisket or some direct heat cooking over coals. This indirect heat style of cooking wasn’t eaten around here on a consistent basis.

DV: Did you grow up eating any barbecue in the area?

PC: We have a yearly cook-off called the World Championship Barbecue Cook-off the first weekend of October. Folks come from around the area to cook and compete.

DV: Do you compete in that event?

PC: My brothers have, but I haven’t. We usually just sit around and drink beer. We really just grill stuff.

DV: So how did you learn to do indirect heat barbecue?

PC: Just watching other people’s techniques. I have a friend in Raymondville who showed some me tips on how to cook a brisket and what pit to use. Then I just started experimenting with different types of wood.

DV: How much did you know about barbecue when you opened up?

PC: Not a whole lot. I had experimented in the backyard. It didn’t come from catering or cooking at events, it was just backyard barbecue.

DV: So you lost your job and just started looking for something to do? 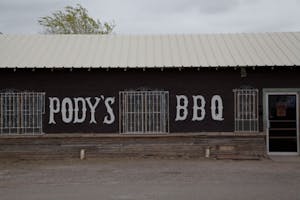 PC: Yeah. Me and my wife were running around town and we saw this building. It had been for sale for about three years. I wanted to do something where I’d be my own boss. I had a little bit of savings and I had a retirement account. I had to take a big penalty on my retirement account and I bought it. Thankfully I’ve made up for it since and started putting money back into it.

DV: That’s a huge risk after losing your job.

PC: Yes, but without risks you don’t get the reward. The cards fell as they were supposed to. Seven months after I opened you stopped in and you weren’t even looking for us. We were just there right off the interstate. Since your book came out we’ve had folks coming from Austin, San Antonio, and Houston. They trek all the way out here to eat.

DV: How has business been since the Top 50 came out?

PC: We’ve doubled if not tripled our business. The local media have been big doing stories on us making the Top 50. Now we get catering calls from the oil fields at least twice a week.

DV: Is a lot of the new business locals getting the word or travelers coming through

PC: Yes. There are people coming from all over.

DV: You’re easily the most secluded and the furthest west barbecue joint in the Top 50. Did you have hopes that our tasting team would make it out that far?

PC: Once you open up a barbecue joint you start trying the stuff around you to compare it. We also hear from a lot of folks who do the same. From what I’ve tasted and what I’ve heard we are very proud of what we’re doing here. It was still a big surprise. I never thought we’d be on any Top 50 list.

DV: How did you hear that you’d made it on the list?

PC: I received a letter from Texas Monthly telling me I was one of the top fifty joints in the state – I mean the world. Nobody cooks like Texas does. We had a celebration here at the barbecue joint. We still can’t believe it.

DV: I saw on your Facebook page that you went out and bought a copy of the magazine right away.

PC: I called Texas Monthly and they sent me some copies. I bought a whole box. Folks ask for them and want me to sign them.

DV: Where all have you eaten barbecue from the Top 50?

PC: I’ve been to Pecan Lodge, Big Boys and the one in Fredericksburg – Cranky Frank’s. I got my photo taken with all those pitmasters. We’re going to hit some more too because my wife and I like to travel around.

PC: Not yet. I haven’t asked for much.

DV: Your name is Israel Campos. Where did you get the name Pody?

PC: It’s an old cowboy name. A cousin of mine saw it in a book and told me my new nickname was Pody. I didn’t like him calling me that, but it caught on and everyone just kept using it so it stuck.  Now everyone knows me by that name.

DV: So you literally put your name on the joint?

DV: When I visited you had a variety of smokers. Can you describe them? 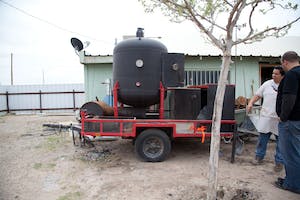 PC: I have some regular offset pits, and I have a big one that has a lazy susan style rack inside a big tank. The ladies and I call it Lazy Sue. That’s her name. If I do any events around here I’ll bring Lazy Sue with me.

DV: Where did you get Lazy Sue?

PC: When we first opened we were a big hit, but we jut had two small pits. We were selling out of brisket, and the folks around here weren’t big on me selling out. They’d say “Cook some more.” I have a buddy named George Smith. He had a big pit that he’d just built. He let me borrow it and said “I don’t want you selling out anymore.” I finally ended up buying it.

DV: You said when you were traveling through Central Texas that you liked the woods being used. What kind of wood do you use now and where do you get it from?

PC: About sixty miles east of here in Fort Stockton they have tons of pecan orchards. I get pecan wood from them. They also bring in post oak from Central Texas. I get the mesquite from San Angelo or Abilene. The cherry comes from the Las Cruces (New Mexico) area.

DV: Are all those woods mixed for all the meats?

PC: The cherry and the post oak are used on the spare ribs. For brisket I start with pecan then add some mesquite. Those are both fast burning woods so I smooth it out by adding oak. The oak will cook all night. 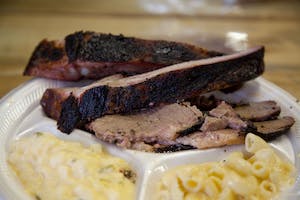 DV: There’s a green chile hominy on your menu that was outstanding but you don’t see it very often on barbecue menus. Where did that recipe come from?

PC: I’ve added and taken away from other recipes, but this one is my recipe. I use the Hatch green chiles from New Mexico when I can. I’ll be bringing some up to Austin in November.

DV: Do you still have that spicy sauce?

PC: Oh sure. It’s very popular. We have a different variety of chile now. We’re using Trinidad scorpion peppers. Oh man! It’s the hottest pepper in the world. It beats that ghost pepper. The sauce has some big chunks in it. A guy from Midland came in just to try it. He went through two glasses of milk and four waters. Some people who try it just have to stop eating. They take their food to go. I tell them all to be careful what they wish for before they try it.

DV: Does it come with a warning label?

PC: It just says “Hot” on it. We still have the milder habanero available too.

DV: So you’re using habanero peppers in your milder sauce?

PC: Yes sir. We have the regular sauce too with out any peppers.

DV: Now that you’ve seen your customers double and triple, where do you plan to take the business from here?

PC: We might add a few menu items. I had a business pro trying to get me open another restaurant. He suggested I open a place in Carlsbad, but I want to keep it local. I don’t any part of the franchise business.

DV: But you could be the best barbecue in New Mexico.

PC: No kidding, but I wouldn’t be able to be there enough. It would lose that Pody touch.